Local legends The Undertones are pleased to announce a headline Belfast show at Limelight 2 on Saturday, December 18th 2021. Tickets on sale Friday 18th December at 10 am from Ticketmaster.ie

The Undertones emerged from Derry in 1976, the result of five friends (John O’Neill, Damian O’Neill, Feargal Sharkey, Billy Doherty and Michael Bradley) learning how to play basic rock and roll.

Even by the standards of that decade, Derry was not the rock and roll capital of anywhere. With no live bands worth watching, they learned by listening to mail order records, reading one of the few copies of NME that made it to Derry but most of all from listening to John Peel’s wonderful show on BBC Radio One. Practising in their bedrooms eventually led to the band recording John O’Neill’s ‘Teenage Kicks’ in 1978 on Terri Hooley's Good Vibrations label in Belfast. The legendary DJ John Peel received a copy and liked it so much he played it twice in a row on his radio show.

The Undertones signed with Sire Records and ‘Teenage Kicks’ was re-released, resulting in the band's first appearance on Top Of The Pops. Over the next five years, John O Neill, crafted further pop gems such as `Here Comes The Summer`, ‘Jimmy Jimmy`, `You’ve Got My Number (Why Don’t You Use It)’ and ‘Wednesday Week’ whilst Damian O’Neill and Michael Bradley contributed ‘My Perfect Cousin. They also recorded four highly acclaimed LPs. Indeed, they almost enjoyed the life of professional musicians. In 1983 Feargal Sharkey left the band to pursue a solo career and the remaining members decided to call it a day. The Undertones were to remain silent for the next sixteen years.

In 1999 The Undertones reconvened, without Feargal Sharkey, to once again perform their two-minute, three and a half chord songs to a new generation of fans in Derry. Fellow Derryman Paul McLoone replaced Sharkey on vocals and his vocal prowess and electric onstage presence soon convinced any doubters that he was more than capable of doing the job.

After much consideration, the band released an LP of new songs called `Get What You Need', which was critically acclaimed by Q magazine, Uncut, Rolling Stone and Hot Press. Songs like ‘Thrill Me’, ‘I Need Your Love The Way It Used To Be’ and ‘Everything But You' showed that the art of writing short, sharp songs had not been lost over the previous two decades.

2018 marked the 40th Anniversary of the release of their most influential and famous song, ’Teenage Kicks’. On 21st April for Record Store Day 2018, the band released a Vinyl Singles Box Set contains the 13 x 7” original Undertones singles from the classic early period: 1978-1983.

2019 marked the 40th Anniversary of the release of their most influential and seminal self-titled first album. 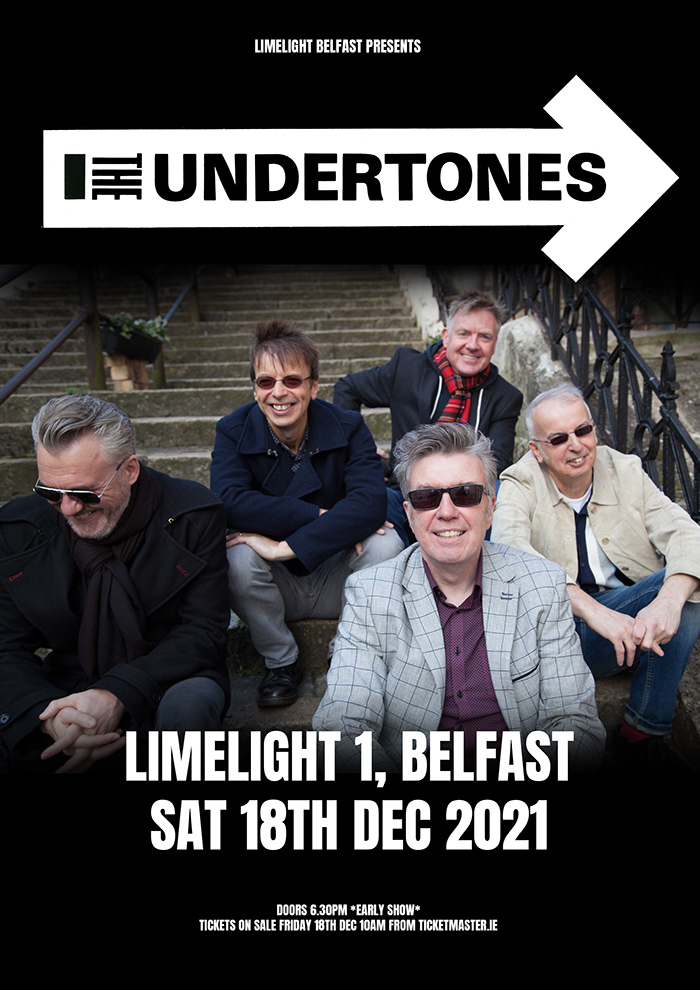 Following their sold-out show at The Button Factory in January, The Dead South confirm they will return to Dublin in 2020 performing at Vicar Street, 18th February. The band will also perform Ulster Hall, Belfast on 19th February. Tickets on sale this Friday...

Exactly 20 years after the release of his self-titled, debut solo (& No.1) album, RONAN KEATING has announced a summer tour that will include a Show in Belfast playing Live At Botanic Gardens on Friday...