Today, Mike Joyce is parting ways with his one of a kind Platinum Disc for The Smiths’ iconic ‘The Queen is Dead’ album to raise money for Back on Track – a local charity who supports people facing multiple disadvantages in Greater Manchester.

Mike has got together with Salford born Tim Burgess from The Charlatans and #TimsTwitterListeningParty to arrange the event. For just £5, fans of The Smiths could win a special piece of music history whilst also helping people who have struggled with mental health and social isolation during covid19 lockdown.

Mike Joyce explained why this matters to him;

“I’ve been working with Back on Track for the last few years and I’m taking this opportunity to try and generate some much-needed funding for the people they support in Manchester. Every penny that is generated from this venture will go towards the fantastic work that the charity does. So here’s the story… I’ve been invited By Tim Burgess to play ‘The Queen is Dead’ in its entirety at his now infamous Listening Parties on September the 12th at 9 pm and that became the catalyst to attempt to raise some money to coincide with the event.”

“The Platinum Disc was presented to me by Warner’s Music. It’s an extremely rare piece of music memorabilia and as such, it’s virtually impossible to quantify what it’s worth as this is the very first time such a unique item has ever been offered to the public. I decided it would be a better idea to have a raffle rather than an auction as that means everyone that buys a ticket has a chance of owning it. Good luck folks, and many thanks for helping!” 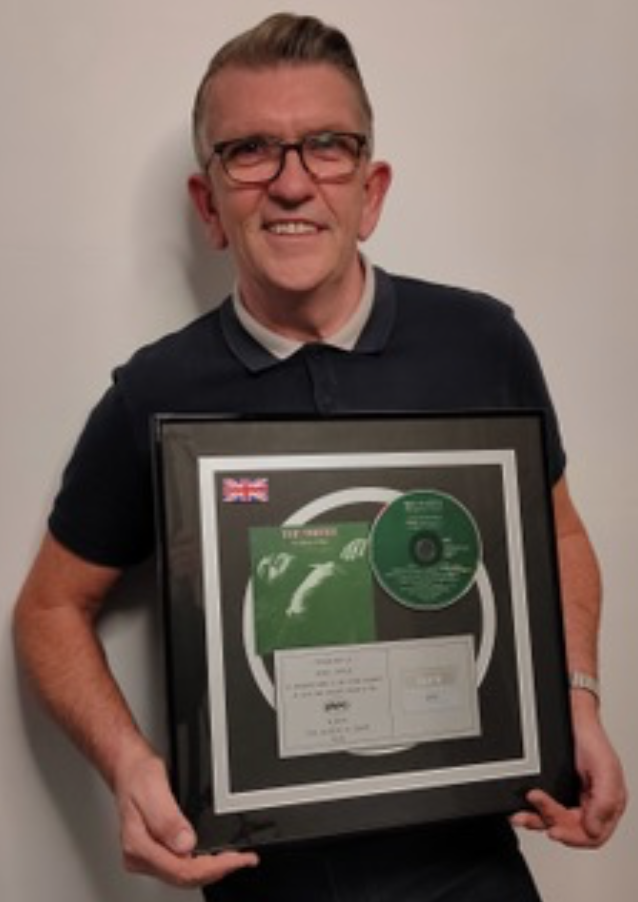 The Queen Is Dead was released in 1986 by Rough Trade Records and was The Smiths’ third studio album. It was certified Platinum to commemorate sales reaching over 300,000! It reached no.2 in the UK album charts and was voted the greatest album ever by NME.

Mike has been a patron to Back on Track since 2018. Siobhan Pollitt, the charity’s CEO, shared the buzz this event has created; “We are continually blown away by Mike’s support. Covid19 has been an extremely difficult period for the people who usually come to our centre and this burst of positivity has come at exactly the right time! It means so much to us all.”

Back on Track is normally a bustling centre in Ancoats but has had to find new ways of keeping their community connected. Since March, they created a remote crisis response and have provided ongoing practical and wellbeing support to hundreds of people struggling with lockdown isolation.

The Platinum Disc raffle opened today and will run until 9 pm on the 13th of September. You can get your tickets at www.justgiving.com/fundraising/queenisdeadplatinumdisc

You can also tune in to Tim’s Listening Party on the 12th September to hear Mike and Tim talk about ‘The Queen is Dead’ album.

‘Electronic’ by Electronic is to be reissued as a limited edition white vinyl on 24 January 2020 available exclusively through Rhino.co.uk as well as on black vinyl through all other retailers. For the first time […]

Johnny Marr played an amazing show at The Ulster Hall, Belfast, 01/11/18. Clair McAllister was on hand to take these fantastic images. Check out more images from Clair McAllister on Twitter and Instagram.     […]