The Darkness have released the brand new song ‘Nobody Can See Me Cry’, taken from their forthcoming album Motorheart out November 19th via Cooking Vinyl.

‘Nobody Can See Me Cry’ is a high-octane riffola featuring an eye-watering guitar solo of monstrous proportions, charging verses of utter determination and a high-flying chorus all powered by sheer angst, passion and unfiltered emotion.

Regarding the single Justin Hawkins says, “Nobody Can See Me Cry. It’s devastating. I yearn to be seen. On this I’ll settle for being heard. Listen to this song, it’s brilliant. I should know, I sang it."

Watch the video for ‘Nobody Can See Me Cry’ - BELOW:

‘Nobody Can See Me Cry’ follows the recent release of the lead single and title track of the band’s forthcoming opus Motorheart.

Motorheart is a record of immeasurable rock and roll extravagance, and yet another masterpiece from England’s favourite rock icons.

Released in a wide variety of formats, including standard and deluxe versions, both digitally and on CD. There’s a heavyweight black vinyl album, limited edition colour LPs and an old-school cassette version. With exclusive bundles and signed editions to boot, it’s the complete aural experience from The Darkness, and a glorious addition to one of the most exciting canons in British rock music! 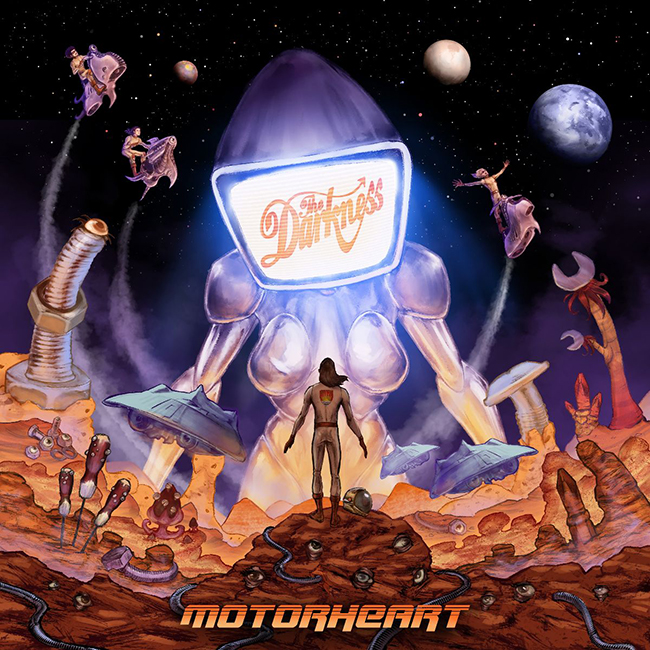 With a back catalogue overflowing with sonic gold and a live reputation that most bands can only dream of attaining, The Darkness have established themselves as one of the most loved and important British rock bands of our time. Their last album, 2019’s Easter Is Cancelled, became the band’s fourth Top 10 album in the UK, whilst also topping the Official Charts Top 40 Rock Chart and the iTunes Rock Chart, alongside receiving swathes of critical praise.

The Darkness will be showcasing the live potency of Motorheart on their extensive 22-date UK headline tour throughout November and December this year. A true spectacle to behold, fans will be treated to brand new songs from the album as well as hits from across their award-winning, platinum-selling back catalogue. Support also comes from British Lion, the up close and personal side project of legendary Iron Maiden founder and bassist Steve Harris. Tickets are available here.

In the Year of Our Lord, 2019, while turmoil and chaos beset the world, a mighty force is about to be unleashed. As the spartan time of Lent unfolds, and society looks set to implode,...

UK rock band The Darkness are pleased to announce a headline Belfast show at the Limelight 1 on Tuesday 26th November 2019.  The Darkness have announced that they’ll release a new album later this year.  It’s titled Easter...

THE DARKNESS - Unveil hilarious video for 'All The Pretty Girls'

The Darkness have released the highly entertaining, tongue-in-cheek video for their brand new single ‘All The Pretty Girls’, out now through Cooking Vinyl. Introducing the video in his own inimitable manner, frontman Justin Hawkins proclaims,...