With Lazer Guided Melodies released this week to a chorus of rave reviews, Spiritualized and Fat Possum Records today announce the second stage of The Spaceman Reissue Program: definitive vinyl releases of the first four Spiritualized albums. Pure Phase, the band’s seminal second album, will be released on 11th June.

The album is the second in this series of 180g double albums with lacquer cuts from original sources by Alchemy Mastering, presented in a gatefold jacket with reworked green artwork by Mark Farrow.

Briefly renamed Spiritualized Electric Mainline, Pure Phase expanded on the amount of personnel involved in making a Spiritualized record, with Sean Cook joining on bass and the Balanescu Quartest adding string arrangements. The record sounds like no other as there are two mixes running together concurrently.

You can’t really compare this record to any other because of how we mixed it; in such an “incorrect” way. We mixed the tracks twice but I couldn’t decide which one I liked better so we said “let’s have them both”. Both of them were on tape so we spent hours cutting them into usable sections. If you run two things together in parallel you get this kind of Hawkwind effect (phase), which gets deeper as they drift away from being ‘locked’, so we had to keep re-locking on a bass drum every eight or ten bars and it took forever.

If you listen to the isolated parts, everything is incredibly simple, the horns, the slide, all these little motifs and they lock together like some strange kind of machine. Something like Kraftwerk was the nearest thing in my musical vocabulary at the time. Great rock and roll music is like systems, it has its own endless cycle. Pure Phase was Michael Nyman, Steve Reich and John Adams, rock ‘n’ roll and gospel music, and it sounds like driving as fast as you can in torrential rain.

I wish I could do it now, to mix things twice and throw it together and end up with this magic world. It was a thing that was out of our control and it just sounded better than we could have imagined so we chased it.

Watch the 'Let It Flow' video - BELOW: 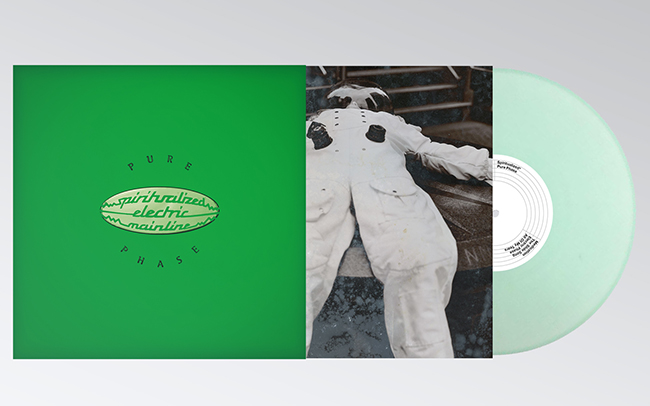 Welcome to the July 2018 edition of our monthly new music playlist, which is available to listen to and watch via YouTube. If you enjoy any of the songs featured here, we encourage you to...

Spiritualized has released the track Here It Comes (The Road) Let’s Go. The new song available NOW follows the double A-side A Perfect Miracle/I’m Your Man as the second single from the long-awaited new album...

London-based Glass Redux Records, the sister label of Glass Modern Records, has announced a new black vinyl edition of 'Fucked Up Inside' by British space rock legends Spiritualized. Originally released in 1993, this was their first official live release. This...