Roy Orbison is back to amaze audiences with his unique voice and live performance once again. After the success of last year’s pioneering holographic In Dreams: Roy Orbison in Concert tour, Base Hologram the leading developer of concerts, theatricals and spectacles that combine holographic cinema and mixed reality with live entertainment, have now announced Roy Orbison & Buddy Holly: The Rock ’N’ Roll Dream Tour, a ground-breaking new tour featuring the award-winning rock and roll legends.

It is yet another chapter for the revolutionary Hologram movement. The tour will bring Orbison and Holly together for an enthralling event that will tour throughout the UK & Ireland before further dates worldwide.  Eric Schaeffer (Million Dollar Quartet), who shepherded the In Dreams event will return as the director of the shows.  It is the first time a Buddy Holly hologram has been created.

“Both Roy Orbison and Buddy Holly set the stage for what was to come down the road in the music industry,” said Brian Becker, Chairman and CEO of BASE Hologram.  “These two men were forward-thinkers who understood what new forms of technology could do for their craft. They defined the genre of Rock and Roll from writing to recording to the standard band configuration and they influenced everyone from Elvis to The Beatles. Now to be able to recapture that magic on a grand scale and let their fans see them together will be something truly special.”

Accompanied by a live band and live back-up singers, this cutting edge holographic performance and remastered audio will transport audiences back in time for an evening of Roy Orbison and Buddy Holly’s greatest hits onstage, these are songs that have stood the test of time.

Universally recognized as one of the great music legends and praised by everyone from Bruce Springsteen to Morrissey to Bono, Roy Orbison’s catalogue includes such chart-toppers as Oh, Pretty Woman, You Got It, Only The Lonely, Crying, I Drove All Night, It’s Over and In Dreams.

“My father’s music meant the world to not just to us Orbison’s but to millions of fans worldwide. Being able to reopen his legendary songbook and again hear his voice bounce off great concert hall walls is both a transcendent and cathartic experience,” said Roy Orbison, Jr., President of Roy Orbison Music. “Dad jammed with Buddy in Lubbock Texas and helped change music history by turning Buddy on to Norman Petty Studios; Buddy later returned the favor by recording two of Dad’s songs on his first Cricket’s album. How beyond cool and special that these two great friends, now get to tour the world together.”

A seasoned performer by age 16, Buddy Holly was known not just for his distinguished look, but also for his mastery of several music styles. In addition to hits such as Peggy Sue, Oh Boy!, Not Fade Away and That’ll Be the Day, Holly was among the first artists to use techniques such as double-tracking on his albums. Along with his beloved band The Crickets, Holly helped set the standard for the Beatles and others for rock and roll orchestration by setting the two guitar, bass and drum line-up now seen in traditional concerts.

“Buddy and Roy were Texans who shared a mutual respect and admiration for each other’s creative musical genius and brilliant song writing abilities,” said Buddy’s wife Maria Elena Holly. “Their long-time fans and a new generation of fans will now have the opportunity to see these great legends perform together in a unique setting, showcasing two of the finest, most influential, and beloved artists in music history.”

With nearly 3 million followers on Facebook and almost 5 million monthly listeners on Spotify between them, audiences are still enamoured with the men who brought “geek chic” and horn-rimmed glasses into the mainstream. This tour will allow fans old and new to get the chance to experience these pioneering figures in a spectacular and thrilling new way. Pulling from their combined 16 platinum records, 19 gold records, nearly two dozen Top 40 hits and 10 combined GRAMMY awards, this transcendent musical event will give audiences a once in a lifetime musical experience. 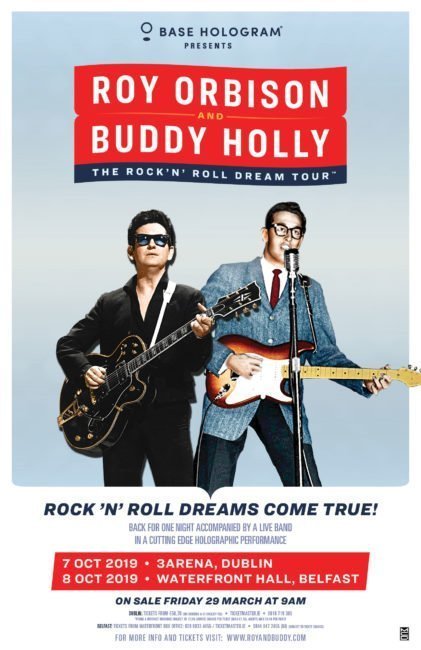 Tickets on sale this Friday at 9 am:

Tickets for Belfast Waterfront are available:

Funk legend Nile Rodgers will return to Belfast with his legendary band CHIC on Tuesday, June 04th 2019 at Waterfront Hall. Among music legends, Nile Rodgers is truly exceptional. He amplifies his legacy as a […]

Reverend and the Makers are pleased to announce their ‘Greatest Hits Tour’ is coming to Belfast’s Limelight 2 on Friday 01st November 2019. With six Top 20 albums already under their belts, Sheffield rock’n’roll radicals […]