The homeless situation in Manchester has been an issue for some time but the pandemic has seen these numbers rise yet again, unfortunately. Lifeshare is a homeless charity based in Manchester and raises awareness for the homeless community in the city. The charity will be showing an online Christmas music festival this Saturday (December 19th) which aims to raise some much-needed funds for this Christmas and beyond.

The show was put together by High Violet PR & Plugging and filmed by Niamos at YES in Manchester over 12 hours last Saturday. Niamos have done a great job of editing the show and it will be streamed this Saturday (December 19th) beginning at 5 pm UK time. The whole show lasts for nearly 5 hours and it’s certainly a great evenings entertainment!

As you can see on the artwork Lifeshare also have an ongoing online Xmas market as well as surprise guests, raffles, a choir and live DJ sets until the 24th too.

You can watch the show for free on the Lifeshare website but if you can make a donation, no matter how big or small this will, of course, be very much appreciated after the year we’ve had.

The line up for the show features exclusive sets from some fantastic, already established artists as well as some brilliant up and coming ones too. Here’s the running order and what to expect for the evening:

Karl Hildebrandt (spoken word): Before lockdown, Karl had been making a name for himself on the live circuit, performing his spoken word sets, full of his dry wit and tales of woe whilst opening up for many a band. He was the perfect choice to kick off the festivities.

Ben Corry (The Battery Farm, acoustic set): The Battery Farm are another act who have been making a name for themselves around the Northern Quarter of Manchester recently, playing high energy sets and mixing Punk and politics. Lead singer Ben gives us a stripped-down and raw version of the bands set on his acoustic and it’s all killer no filler.

Ventrelles: If you’re a fan of Echo & The Bunnymen and The Pale Saints then you’ll love these lads. They may be relatively new on the scene but they certainly know how to write an Indie Pop belter going off their new single ‘County Lines’ which is out now.

Stephen Wilson Jnr (acoustic set): Stephen has been a part of the Manchester music scene for some time now. In the 90s he fronted ‘Wilson’ and more recently Alt/Soul/Country six-piece The Cornelius Crane. As well as the aforementioned he also fronts Soul/Funktsters The SWJ Group but on Saturday it’s just himself and an acoustic proving just how good a singer-songwriter he is.

Cold Water Swimmers: This Manc based trio have been churning up live shows and spitting them out in and around Manchester for a little while now, fronted by seasoned singer Chris Bridgett they certainly know how to put on a good one.

NGUVU: Funk, Soul and Hip Hop collective NGUVU know how to lay down a groove. Before Happy Mondays’ Julie E Gordon set off for a sunnier climate she was fronting the pack but those duties have been handed to ex-Drunken Munk Jay McCurdy now he’s back from helping out with London outfit Rotten Hill Gang. Expect Funk and Soul galore topped with a slice of Hip Hop.

Ruins: Liverpudlian duo Ruins are a thing of beauty. Their music is ethereal and shimmering. Falsetto pitched tunes backed by heavy bass lines and drum machines aplenty. Their gorgeous debut album ‘Sample Size’ received global airplay on some huge stations and it’s easy to see why.

San Pedro Collective: This Mancunian collective features two Indie legends, Rikki Turner of Paris Angels and The New Southern Electrikk and Si Wolstencroft, drummer extraordinaire for Ian Brown and The Fall to name but a few. Backed up by some brilliant seasoned musicians they produce Electro inspired Pop/Indie/Soul gems.

Leon Meya (Northern Uproar, acoustic set): Britpop legends Northern Uproar were possibly the youngest Indie band to ever grace the Top of the Pops stage back in the mid-90s, now older and wiser lead singer Leon’s sound has certainly matured with his take on Spanish guitar and excellent vocals but expect to hear a few old classics too.

Heavy Salad: These guys have had an excellent year. After releasing their brilliant debut album ‘Cult Casual’ and being championed by the likes of Steve Lamacq, Lauren Laverne and John Kennedy they turned up to give us a stripped-down gig (they usually have backing singers too) with just the three of them performing songs from the album and new ones too!

Leon The Pig Farmer (spoken word): A Manchester dwelling Yorkshireman with more than a lot to say. Jack Horner AKA Leon The Pig Farmer has been putting on his spoken word performances all over the north over the past few years to many a happy customer. If they’re not hilarious drug-addled, psychedelic tales it’s heart-wrenching and thought-provoking mental health poems with a bit of war thrown in for good measure. Raw energy and words of wisdom.

Tom Hingley (Inspiral Carpets, acoustic set): Inspiral Carpets legend Tom turned up to show his support for the cause and as ever put on a belting performance. Expect the odd classic with a few new beauties and THAT voice.

Slack Alices: Mancunian quartet inspired by NYC Punk. They’re fast, loud and have a bucketful of ‘tude and they look fantastic. These boys are definitely ones to watch.

Barry Sutton (The La’s , acoustic set): I think we can all agree that The La’s made one of the best debut albums of all time, in fact, it very famously ended up being the only studio album they ever made so it was an absolute pleasure to have Barry Sutton involved. Barry’s guitar skills are second to none, it’s like watching a Scouse John Martyn but he certainly came into his own on the night.

Meilir: If you haven’t yet heard of Meilir you will be doing very soon (especially after this performance). His debut solo album ‘In Tune’, which is out now, has been a long time coming but it’s been well worth the wait. He’s recently been played on some huge stations on a global scale and the much respected God Is In The TV Zine included his album in their Top 50 of 2020. Keep your eyes on this lad, for fans of Thom Yorke, Badly Drawn Boy and Tim Buckley. 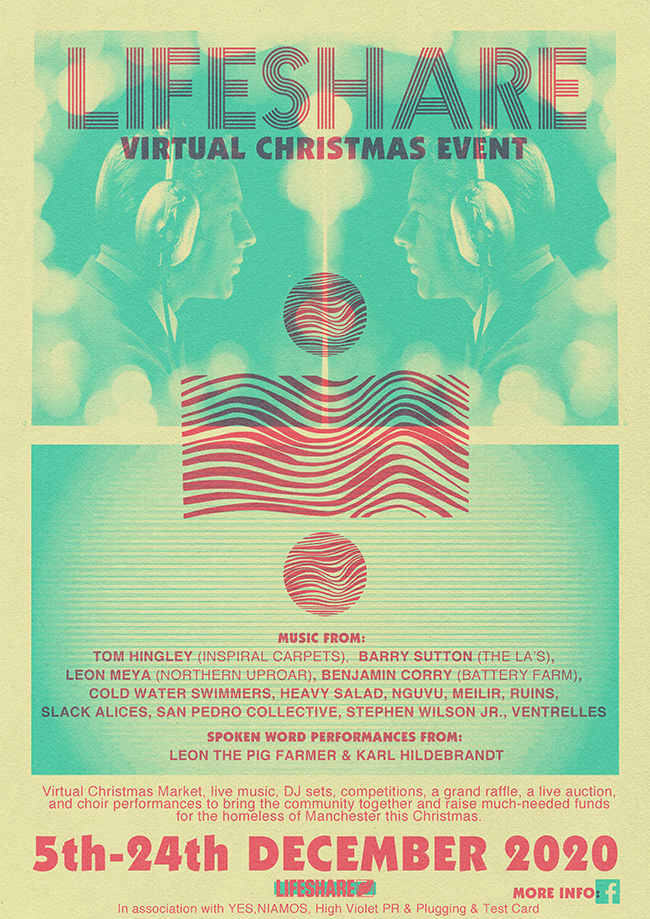 Do you know that feeling when all the Christmas rush of gifting, cooking, running around quietens down and you’re actually taking the moment to sit together with your family or friends by candlelight to share […]

Ryan McMullan has announced an exciting livestream event which will take place this Christmas, on Sunday 27th Dec. Broadcast Live from the historic Ulster Hall stage, Ryan will be performing a set of music which […]

Following the recent release of their critically-acclaimed new EP ‘Christmas, Hopefully’, Bear’s Den have unveiled the official video for the collection’s title-track. Recorded in immersive audio, similar to surround sound, the new visuals for ‘Christmas, […]