He’s a legend and an icon. John Lydon changed the face of music and sparked a cultural revolution. The frontman and lyricist of the Sex Pistols and Public Image Ltd (PiL) caused a political earthquake and transformed music for good. His new book is the brilliant, funny and insightful ‘I Could Be Wrong, I Could Be Right’.

Beautifully designed and limited to just 10,000 numbered copies, each book includes an original signature from John.

In it, Lydon talks about the way he sees life, along with anecdotes from his unique and extraordinary career. Expect a pyrotechnic, one-off read from a true original who has always been one step ahead. 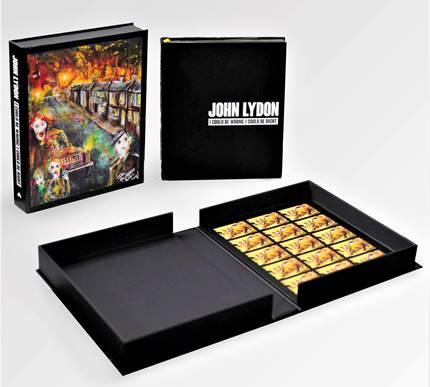 ‘I Could Be Wrong, I Could Be Right’ covers a range of topics, including the way John sees the world, his response to current affairs, his battles with technology and much more. It features exclusive artwork, painted by John. Those who pre-order have the chance to win the first book off the press, a free book or tickets to John Lydon’s spoken word tour, now rescheduled to Autumn 2021.

On October 14th, one person who pre-orders the book will be picked at random. They will receive a refund of their book price and will be sent the first book off the press. The book is numbered 0001 and is a unique collectors’ item. That winner will also receive 2x VIP tickets (including meet’n’greet) to a UK tour venue of their choice (providing that venue has not already sold-out).

Ten runners-up will also receive prizes if they pre-order NOW. They will receive two regular tickets to any show (again, providing that particular show has not already sold-out).

NB If any of those ten runners-up already have tickets to the show and do not wish to attend another one, the value of their book will be refunded.

Books are only available via a direct link from the artist’s website www.johnlydon.com.

Tickets are selling fast for John’s extensive first ever UK spoken word tour, also titled ‘I Could Be Wrong, I Could Be Right’ – as previously announced, all dates have now been rescheduled to autumn 2021 and are as follows;

AHEAD OF THEIR 23-DATE UK/EUROPE TOUR, WHICH KICKS OFF ON FRIDAY 18TH SEPTEMBER, Public Image Ltd (PiL) have revealed a ‘Making of ‘What The World Needs Now…’' film - their critically acclaimed new album, which...

Sex Pistols 76-77 is a comprehensive collection of recordings of the Sex Pistols before the release of ‘Never Mind The Bollocks, Here’s The Sex Pistols’ in 1977. Featuring no less than 80 alternate versions of...

“Bangor is an energy.” So said punk legend John Lydon, aka Johnny Rotten, when Open House Festival Bangor signed his band, Public Image Ltd (PIL) to play their first ever gig in Northern Ireland this...