Following their blistering performance at the Isle of Wight Festival, JAMES have announced a major outdoor headline show for the summer of 2022 at MANCHESTER CASTLEFIELD BOWL.

The date, SATURDAY 2 JULY, marks 30 years since the JAMES show at Alton Towers which saw 30,000 revellers descend onto the Staffordshire theme park for a legendary set broadcast live with Chris Evans on BBC Radio One. Their Alton Towers night created plenty of “I was there” moments for JAMES fans and so, to celebrate, the band will perform the same setlist of songs from that night when they play Manchester Castlefield Bowl.

It's remarkable that a 30-year-old setlist includes so many hits such as Come Home, Born of Frustration, Say Something, Ring the Bells, Sound and Sit Down, as well as continued live favourites like Stutter, Johnny Yen and Hymn from A Village, in addition to rare gems like Goalie’s Ball, Live A Love of Life, America and Next Lover which haven’t been performed in decades.

Bassist Jim Glennie remembers, “It was a crazy day that was nearly defeated by the weather and the gig was even more celebratory due to the near-miss. Come and celebrate 30 years since that iconic day, and this time with guaranteed sunshine!”

JAMES are undoubtedly a jewel in the British music crown. Since their breakthrough single, Sit Down, they have released 16 studio albums including the recent UK Top 3 album All the Colours of You, selling over 25 million copies in the process, and performed at countless headline shows and festivals across the world. They continue to be a huge live draw, having sold 60,000 tickets for their UK arena tour scheduled for this November and December, the band’s fastest ever selling tour. 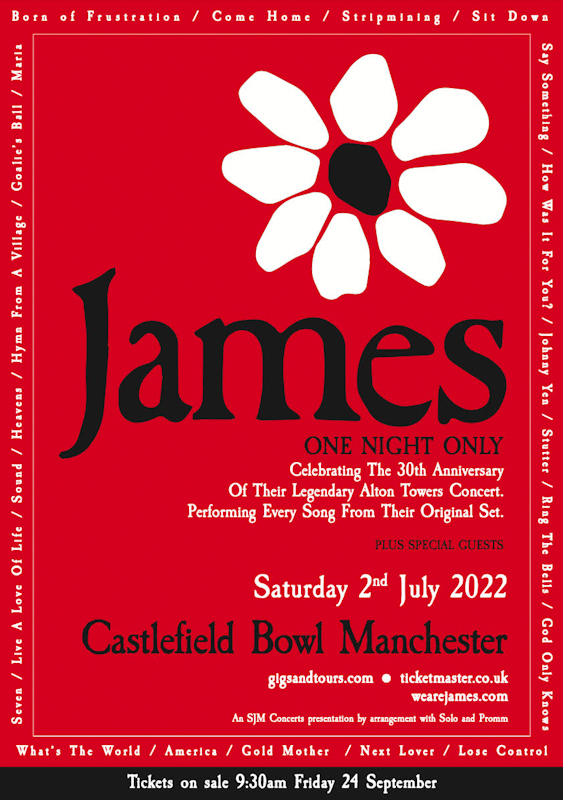 Tickets for JAMES at Castlefield Bowl go on general sale at 9.30 am on FRIDAY 24 SEPTEMBER from: www.gigsandtours.com / www.ticketmaster.co.uk

JAMES / ALTON TOWERS SETLIST / JULY 1992
All songs to be performed, not necessarily in this order

• Sound
• Born Of Frustration
• Heavens
• Hymn From a Village
• Goalie’s Ball
• Maria’s Party
• Live A Love of Life
• Come Home
• Next Lover
• Lose Control
• Stripmining
• Say Something
• Johnny Yen
• Ring The Bells
• God Only Knows
• How Was It for You?
• What’s The World?
• America
• Seven
• Gold Mother
• Stutter
• Sit Down

Twenty years on, Laid and Wah Wah have finally been reunited, and will be reissued together as the band originally intended. The two albums were recorded simultaneously at Peter Gabriel’s Real World Studio in 1993;...

JAMES are proud to announce the release of their new album ALL THE COLOURS OF YOU. Their sixteenth studio album will be released on 4 June 2021 with the title track now available across all...