Irish four-piece rock/pop band Keywest announce a headline Belfast show on Thursday 17th October 2019 at The Limelight 2. The band will be promoting their new album ‘Ordinary Superhero’ due for release on September 27th of this year.

After deciding to start a band, childhood friends Kav & Glover began playing in pubs around Dublin. They took the name Keywest after a trip to Florida for a gig. The English pair were added following a similar trip to Los Angeles where the lads became good friends and stayed in contact.

After making the decision for the English duo to move over to Ireland, other obstacles became apparent to the band. One such obstacle was how a difficult move to Ireland could work financially. Gigs were few and far between for a new band so Keywest avoided the slow gig scene and took to busking on the streets. Wise or unwise the band began honing their sound and style on the streets and quickly became famous for busking on Shop Street in Galway and Grafton Street in Dublin.

In 2015 they released their highly anticipated album "JOYLAND" which shot straight into the Number 1 spot for a number of weeks.

Following the number 1 album, Keywest enjoyed an explosive rise which included a string of radio hits such as “Carousel”, “This is Heartbreak”, “This Summer”, “Something Beautiful” and “Cold Hands”.

In addition, Keywest sold-out shows across the country including sell outs in The Olympia Theatre, The Academy & Whelans all within a 10 month period.

Keywest have been called the hardest working band in the business. They've taken their high energy acoustically driven sound from the streets onto the radio, sell-out shows and to over 200k monthly listeners.

The band's second album ‘True North’ was released on March 2018 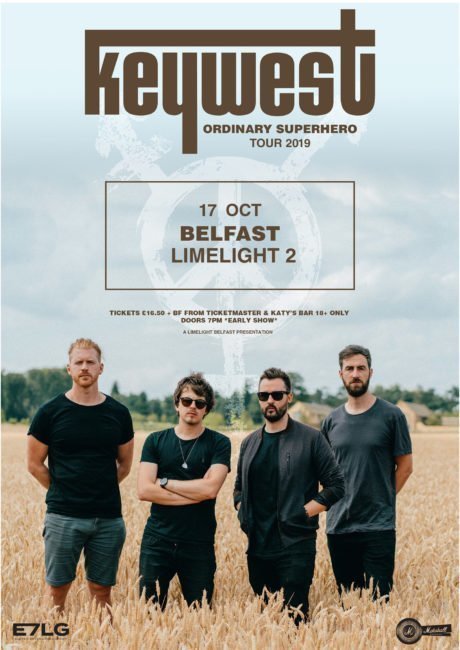 American Southern Rock Group, Cadillac Three are pleased to announce a headline Belfast show at Limelight 2 on Monday 13th December 2021. It's been over a year since the Cadillac Three hit the road for...

British indie-rock group The Wedding Present are pleased to announce a Belfast headline show to commemorate the 30th anniversary of the release of their first singles collection, Tommy at The Limelight 2 on Thursday 26th...

UK singer, songwriter Jade Bird is pleased to announce a headline Belfast show at The Limelight 2 on Tuesday 19th November 2019. On Tuesday, Jade Bird shared her triumphant brand new single ‘My Motto’ as...