Over the course of three independently released EPs, junodream have earned airplay at Radio 1 and Radio X (John Kennedy, Felix White, Maz Tappuni) plus a BBC Introducing Hot List for their previous single ‘easy life’ alongside numerous tips from key new music champions. The quintet will add to their tally of 5 million streams as they kickstart what looks set to be the biggest year of their career so far by sharing the new single ‘Eden Burns’.

Lee Campbell caught up with Ed Vyvyan (lead vocals), Tom Rea (Guitar), and Dougal Gray (Guitar) for a chat about the making of the ‘Eden Burns’ video, lockdown and much more.

It’s a very cool video for your latest single, ‘Eden Burns’ - where was it filmed, and how long did it take to shoot?

Tom: (laughing) A long time. It was recorded in Seven Sisters. The initial idea was to have some cool things. Next thing you know, we are in a studio in the cold, all day in Seven Sisters in a spaceship doing a reverse video.

Ed: And going back on the tube covered in all that stuff as well. It was a place called Cove Studio. We didn't realise, but the material we used for the black oil slick did not come out easily off the floor, and we had to spend time into the wee hours of the morning wiping it up.

Tom: We shot in one day, and some of the guys (at Slog Films) got there really early. It was just a white back-drop, and they built the set.

What's the backstory or inspiration behind the video?

Ed: Well, the track's inspiration was pretty divorced from what it turned out being in the video. The track was about Australian bushfires and confusing messaging debates that people have about climate change, but then Dougal had the great idea about doing something in reverse. Then the guys in Slog decided to put us in space. So it was a really uncoordinated hotch-potch of ideas. It was supposed to be a space captain's demise on a ship as he goes through a mutiny.

We identify our music as space-rock and because it was supposed to be in the future or in reverse. We were like some colony who had left earth. We thought that would make sense. Not sure if it does, really (chuckling).

Dougal: It's like Christopher Nolan on a fifty quid budget.

‘Eden Burns’ has the frightening reality of climate change at its core. What more can be done before people sit up and take action?

Ed: I think the main thrust of what we are trying to say in the song was more about unhelpful commentary from people who don't practice what they preach. Sometimes people can get really far away from the topic, and it becomes a finger-pointing game, divorcing the argument from the serious, underlying current. Yeah, it's difficult to get people to focus on the topic, and I guess all of us are guilty of not doing enough.

Dougal: We don't want to write preachy songs, cause as Ed says, that song is about the discussion of it and how confused it gets.

Tom: The song is even hypocritical in itself. What it's doing is talking about the issues of the issues.

Is there a classic music video that you wish you had made or had appeared in?

Ed: Jamiroquai, where it looks like he's inside a cheesegrater - 'Virtual Insanity.'

Tom: 'Song 2' by Blur. They have one of those wind-tunnel things. It would be quite cool. It would just be a fun day out.

Your song 'To the Moon' is a great track with over 3.7m streams on Spotify. What do you think has driven its ability to connect with so many?

Dougal: We're definitely trying to figure that one out as well.

Ed: We record a lot of our stuff ourselves at home, and that one had not been polished at all or mastered, and then we dropped it on Spotify. In the first week, it got around 1,000 views, and we thought. 'that's the end of that'. And then we woke up one day, and it got on to a bunch of playlists. On Spotify, people are going to 'chill' playlists. It has now become an avenue for chill songs. I think that's why.

Tom: I think it's sub-three minutes as well.

Dougal: It helps with the millennial attention span. That three-minute margin.

Ed: I think in saying that, what we noticed is that people are slightly more into that introspective stuff nowadays lyrically, and not sonically. We're not talking about big things. We're talking about micro-moments and mental issues, which may be more people relate to now than they had in the past.

Do you have a timescale for an album release?

Tom: It's not gonna come any time very, very soon, but it's something we are leaning towards. It's on the horizon.

Dougal (laughing): Come one, put a date on it!

Tom: It won't be this year.

Ed: We are still in the midst of rolling out quite a chunky mix-tape release, which isn't quite an EP and isn't an album. So 'Eden Burns' is the first of a few.

Tom: Next year is our flagpole, our album year.

Ed: At the start of the year, we thought this would be the year for live music. We weren't going to release anything. We were going to tour relentlessly. We started in Germany and the Netherlands, and it was going really well. But now we've been stuck inside and had to accelerate releases and get good at home recording, which fortunately Tom and Dougal are really good at.

Any other peers or young bands out there that are still under the radar and you would recommend?

Dougal: We are really excited about the band that we've got to play at our shows.

Ed: Yeah, a band called LIME, who will be joining us on our tour in April...fingers crossed. They are fantastic. We have also been long-standing fans of a band called Drug Store Romeos, who are doing pretty well at the moment. They've got some good tunes. I personally am a big fan of a guy who makes some up and coming UK hip-hop called Sudders. They have a lot of similar things that we do - micro-moment stuff.

Tom: There's a girl group. They are called 'Mint Field' - they are really good. Kind of a Spiritualized vibe. No short two-minute songs with them.

Dougal: The zeitgeist is punk right now, and I personally am a lot more interested in people who are doing something a little more reserved. Something with very simple songwriting. Very clever.

When you headline Glastonbury, what special guest would you wheel out on stage to help sing in the encore on one of your tracks?

All: (laughing) Chris Martin would have to be there somewhere because he always is!

Tom: Because there are five of us in the band, it might be good to do one of those Groove Armada type gigs, where you have so many musicians on stage towards the end. A massive epic!

Dougal: We could do like a Jay-Z, Linkin Park thing. I probably opt for a rapper where we could do a mash-up, one of a kind, ‘To the Moon’ featuring Jay-Z.

You have a song, 'Galactica'. I can't help thinking of the sci-fi TV series Battlestar Galactica when I was growing up. Any sci-fi movie or series you would like one of your songs to be featured in?

Ed: Maybe if they do another ‘ Blade Runner’. We’ve got a track, a mystery track, that I think would be a perfect, perfect track for the introduction of a movie like ‘Blade Runner’.

Dougal: Does Christopher Nolan count? I am actually just obsessed with Christopher Nolan. I don’t know any sci-fi movies either (chuckling). Maybe like the 10th Terminator, cause I am sure there will be many more to come.

Ed: The most obvious one - ‘2001: A Space Odyssey’. That was a pretty big influence on the ‘Eden Burns’ music video.

I just finished watching all eight episodes of The Serpent on Iplayer last night. Any memorable box-sets or series that you're binging on at the moment?

Dougal: I have embarrassingly just started ‘Peaky Blinders’, which is amazing. Usually, it’s like ‘The Sopranos’. Everyone says, “watch it,” but I never have.

Ed: That happened to me with ‘Succession’. That’s amazing as well. Hilarious.

Outside of music, any new hobbies, pastimes to relieve lockdown boredom?

Ed: I’ve been playing a shit-ton of online chess.

Dougal: (Getting out his accordion). I just got this today, actually. Just showing off my new wheeze-box.

Which musician/artist would you like to interview, and what would be your first question to them?

Tom: Can I go back in time? I would meet Thom Yorke and say, ‘do you wanna do this band and have me in it?’ It would have to be him as I do idolise him. I don’t know what the first question I would ask is. I would probably mumble and be really weird & nervous.

Dougal: It was probably the same as Tom; I would suck up to John Lennon for about 20 minutes. He’d probably bully me as well. What would I ask him - ‘Would you be my friend?’ 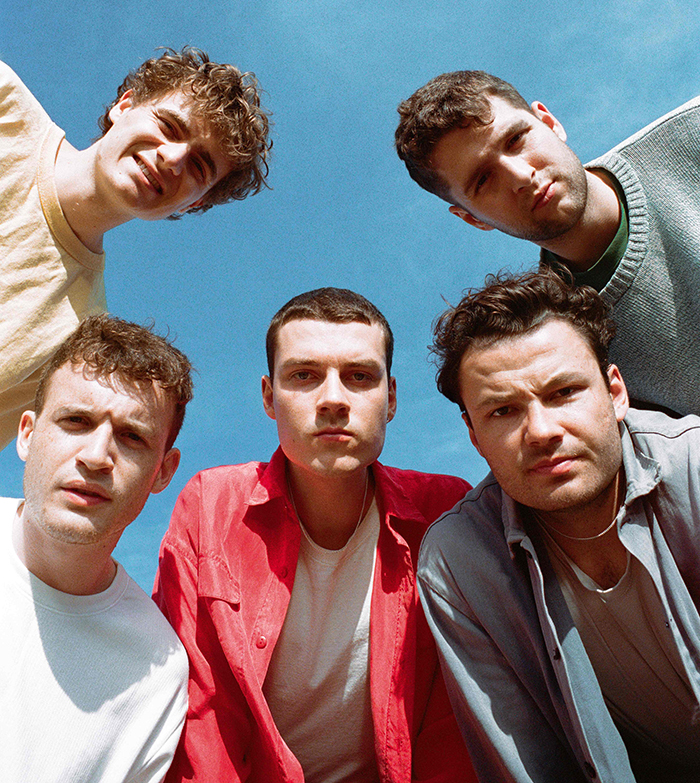 Bristol or London, and why?

Tom: I’m gonna go, Bristol, because of the character, the kind of feel to it. You actually feel like there’s a scene there. There’s a huge art culture there. All the places you go to hang out have similar minded people. It’s quite a friendly, creative place. London can be great also, but it’s a strangely claustrophobic place too. I think everyone would be mentally better off in Bristol.

Ed: Our lyrics and our style have changed dramatically since we moved out of Bristol. They have become a lot more introspective and deep….and claustrophobic & depressed since we moved to London.

Dougal: I think I would say Bristol too. Since we have been in London, the ideal of London - there’s going to be loads of artists in like east London, or Camden or north London. But actually, it isn’t easy to establish some scene there. I think it’s lost some of that character, whereas, at Bristol, it really does have that.

Ed: We all wanted to move to Liverpool, briefly. We were there for six hours on tour and then suddenly I was looking at places for rentals in Liverpool for places to move to.

Dougal: (all laughing): So, why are we all in London?

Bristol-born, and now London based band Junodream are today announcing the release of their debut EP 'Terrible Things That Could Happen'; as well as sharing the first single and title track. A 90s inflected indie...

Over the course of just two singles, this year - ‘Travel Guide’ and ‘Eden Burns’ - Junodream have set a course for a bright future. They were named as Jack Saunders’ Next Wave at Radio...