Happy Mondays go on a marathon twenty-nine date Greatest Hits Tour for October, November and December 2019. Did you ever think you would see the day that the classic Mondays line-up would be on tour again?

Bez: We all split up after the ‘Yes Please’ album, but at that time me and Shaun fought tooth and nail to keep the band together. The sad thing is money and success always seem to have a diverse effect on the band, which is quite sad really, so me and Shaun went on to form Black Grape, then there was a period after that when we carried on as the Happy Mondays without the original line-up. Then we all got back together, and we have been going quite a while now with the original band – we are in such a lucky position to be able to carry on as we are and do what we love best.

Are you all getting on well now?

Bez: Yeah, we all get on a lot better than we used to because we all appreciate what we’ve got now, and we realize that we are in a fortunate position and need to get along with each other.

How does the band relax and unwind after a gig now that you are older and wiser?

Bez: I can’t speak for everybody else, but my lifestyle hasn’t changed that much. I relax by working in the garden – that’s my relaxation these days, and of course, I go out for the odd pint. It’s not changed too much from when I was younger; I still enjoy the things I used to do. I grow my own food and live a more sustainable lifestyle than I did before. I live in the countryside now, but apart from that, I live the life that I’ve always lived.

Where did your love of looking after Bees come from?

Bez: I’ve been away a lot recently, and I lost a swarm of bees which I’m trying to retrieve. I love looking after bees; they remind me of myself – they have a short attention span, and they are always buzzing!

Talking about buzzing looking back, what are your favourite memories from the early days of the Mondays?

Bez: The two times that always stand out for me were when we got to play Rock in Rio in Brazil, and we were in a hotel with Guns N Roses, and we were there for five days – it was a great stand out time. We got to spend time with the great train robber Ronnie Biggs, who made sure we were all sorted. Yeah, we got up to all sorts of debauched behaviour – that was one of my favourite times on tour. And the other time was when we got to spend time with The Embera Tribe in Panama, in South America when we made the programme ‘Singing in the Rainforest’ – that was another great memorable standout memory for me.

You got into all sorts of scrapes over the years with the Mondays. What is the most exaggerated story you have heard?

Bez: Well, I’ll say there is no smoke without fire, but there have been myths going about – I have heard things about myself that I can’t think off the top of my head, but I know they definitely never happened. You hear all sorts of stories, and a lot of them have turned into urban myths.

Was recording ‘Yes Please’ in Barbados possibly the maddest time in the Monday’s?

Bez: It was quite a mad time then, but it was also a great time as well because we had eight weeks in Barbados. The funny thing was when we got to the island, all the leading dignitaries came out to meet us and invited us for a meal. Because it’s such a small place, everyone from the mayor right through to the chief of police all knew us – so I think we made quite a wave there. It was completely bonkers but also really enjoyable as well. We don’t have any regrets, and for me, it was one of those times that I’ll never forget – we had such a great time. We are so fortunate and lucky to have done the things that we’ve done, and it was a great experience for us.

The ‘Yes Please’ album didn’t sell very well and was blamed on the fall of Factory records. What do you think of the album all these years later?

Bez: I disagree with that – the collapse of Factory wasn’t down to us. Factory was expanding so quickly, and there was pressure on us and New Order at the time to get these new albums out, to pay to keep Factory running, so to blame the Happy Mondays is a bit unfair really – it was over-expansion on other people’s parts. I thought that ‘Yes Please’ was a very good album – we wanted Paul Oakenfold and Steve Osbourne to produce the album, and they weren’t available at the time. Everybody expected ‘Yes Please’ to have more of the same Dance and rock n roll cross over style as the album before, but we went with Chris Frantz and Tina Weymouth, who did more of an old fashioned production, but I think it’s a good record. I think ‘Yes Please’ was a stepping stone to the future because Kermit was on the song ‘Cut Em Loose Bruce,’ from the album, and then Shaun and he worked together on the Black Grape record, and that turned into a very successful partnership.

In 2016, the Happy Mondays won the Ivor Novello’s Inspiration Award, further cementing their reputation as one of Britain’s most influential and loved bands. Why do you think people still love the music after all these years?

Bez: I think we were just fortunate to be part of Factory records and to be part of the old record industry before it started dying off.  And because we are the last of the early scene and nothing else has come along replace it, that’s’ why we have managed to survive all these years later.

Will there be any new music in the future from the Happy Mondays?

Bez: You can never say never –  I still think we can produce some good songs, but whether we will ever be chart-toppers again is another question, because the young people today don’t know who we are, and have never heard of us, so it would have to be an unbelievable tune. We are all reaching our mid-fifties, but it would be nice to make new music so that we have got some new songs to play and freshen up the set a bit – I really hope we bring some new music out it would be really nice.

When do you think the time will come when you stop dancing on stage and out the maracas down for good?

Bez: I have been threatening to pack it in, but at the moment I’m still fit and healthy to do it. For me, my biggest problem is I’ve left it too late in life for a career change, so you can’t teach old dog new tricks, so I’ll have to go on for as long as I can possibly do it for.

You stood for the Salford and Eccles area with your own political party named ‘The Reality Party.’ Why did you decide to go into politics?

Bez: The main reason why I stood was because of the fracking issue.  I found it horrifying that one of the ways we can feed and look after ourselves in the future was about to be destroyed. But trying to explain to people what being an anarchist means was really hard work. I was giving it the right, I was giving it the left, and no one could understand why I was giving to everybody, do you know what I mean? And that’s because I was fighting for freedom as well. I wanted to see the end to the banking system, and I was getting people from the left telling me how disappointed they are with me, and I was getting death threats from the right – you know what I mean? (Laughs) It was a mad experience. The main thing is, although I was unsuccessful with the political side of things, we were really successful at raising awareness of the fracking issue, so some good came out of it. It was an experience I’m glad I had.

Do you think you will ever follow up your autobiography ‘Freaky Dancin’?

Bez: Yeah, one day I definitely will do, but not at the moment, because I’ve still got a few more years of living to go. I don’t know if anyone would be interested in reading another part to it, but I will consider it. It’s one of them tasks when you take it on you wouldn’t believe how difficult it is to do really. It’s over twenty-odd years since I wrote that one, and a lot has happened since then up until now, but I’ve definitely got some funny stories I could tell.

The full list of tour dates is as follows: 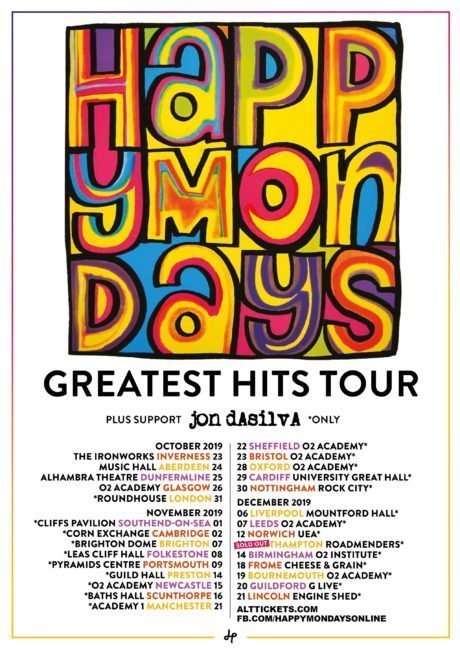 Tickets are on sale now, available from https://www.alttickets.com/happy-mondays-tickets

As Hunter S. Thompson once gloriously wrote, “When the going gets weird, the weird turn pro.” The Happy Mondays seem to have lived their career by this perfect quote and their current touring machine embraces […]

INTERVIEW: Liam from THE WINACHI TRIBE

The psychedelic funk of George Clinton, the brooding menace of Massive Attack, the rolling hypnotic beats of Happy Mondays and the vision and flow of Grandmaster Flash and The Furious Five are all essential ingredients […]

Relaxing on the Sunset strip in San Antonio waiting for that glorious moment when the Mediterranean swallows up that white hot ball of fire in the Ibiza sky, all the while eclectic beats emanate from […]