Belfast-born singer-songwriter and producer Gareth Dunlop has been recognised as an accomplished talent ever since the BBC tipped him as ‘one to watch’ in 2010 when he was not long out of his teens.

In the decade since he has released several singles, a handful of EPs and one album that have been musically eclectic yet have all showcased his highly soulful voice, with several of his songs going on to be used in the hit TV series ‘Nashville’, other shows (‘Lucifer’, ‘This Is Us’, Bones’, ‘Suits’), movies (‘The Best Of Me’, ‘Safe Haven’) and commercials (Disney, Subaru).

However, prior to the 2020 lockdown, Dunlop was just as likely to be heard by live audiences as he forged a reputation as a magnetic and charismatic performer on frequent headlining tours and support slots to the likes of Van Morrison, Jeff Beck, Snow Patrol and James Morrison.

Inspired by icons such as Bob Dylan, Jimi Hendrix and Tom Waits, plus a soupçon of Pink Floyd, Dunlop picked up a guitar aged 14 and soon began performing covers and original songs in live venues around Northern Ireland, RoI and the rest of the UK. In 2011 he won a Young Songwriter of the Year award in Belfast that not only earned him an invite to collaborate with seasoned writers in Nashville, an experience he has repeated many times since, but it also enabled him to tour the US extensively.

Having spent so long away from Belfast following his initial breakthrough, Dunlop decided to record and co-produce his 2017 debut album, ‘No. 79’, in stripped-back fashion at home - literally - with Nashville-based writer Bobby Hamrick and compatriot Alastair McMillan, who had also recorded Dunlop’s first studio sessions at Dublin’s esteemed Windmill Lane and has engineered for U2, The Rolling Stones and Van Morrison. A winning fusion of folk and soul, the album earned critical acclaim and was playlisted on several Irish and UK radio stations, while in RoI it earned an Album of the Week slot on the prestigious RTE1.

Dunlop subsequently established Sycamore Studios in Belfast, where he has recorded his new album ‘Animal’, while also producing albums by friends and fellow Northern Irish singer-songwriters Foy Vance (Signs Of Life 2021) and Lee Rogers (GAMEBLOOD 2022). All three artists will be on tour together in 2022, with Dunlop also on additional duty as a member of Vance’s live band.

‘Animal’ consists of a diverse set of songs that include the soulful and anthemic ‘Right About Ready’ and first single ‘Look Back Smiling’, which evoke the ‘80s yet exude a timeless quality, the highly atmospheric ‘Sorrow’ and ‘Prisoner Of My Past’, which both channel late-period Roxy Music, the laid-back ‘60s dream-pop vibe of ‘Humans’, plus a memorable title song that adds an electronic bounce to its subtle groove.

Tickets are available Friday at 10 am from ticketmaster.ie 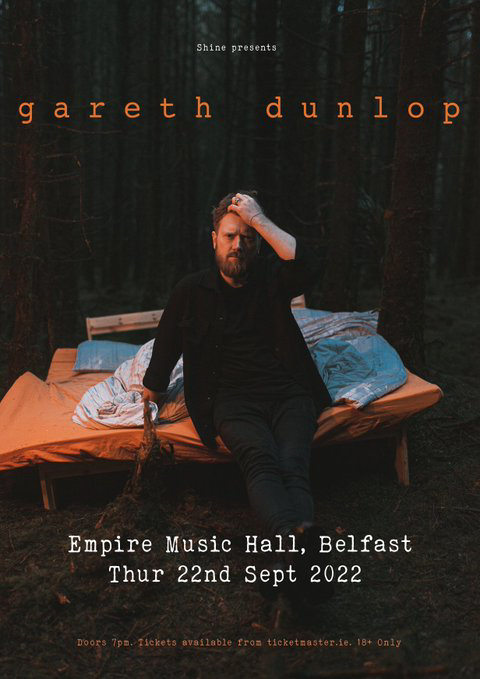 Canadian rock duo cleopatrick are pleased to announce a headline Belfast show at Limelight 2 on Thursday 3rd March 2022. The band’s debut album ‘Bummer’ was released on June 04th 2021 on their own label...

Belfast born singer-songwriter and producer Gareth Dunlop has been recognised as an accomplished talent ever since the BBC tipped him as ‘one to watch in 2010 - when he was not long out of his...