Duran Duran have announced two British warm-up shows at the 02 Academy Leicester for May 21st and 22nd. The performances will lead into a series of huge headline dates across the UK and Europe for summer 2022 and offer fans a rare chance to see the stadium-filling icons of British music in an intimate setting.

Following a recent ground-breaking NFT project in support of their 15th studio album FUTURE PAST, where the band released a limited-edition collection of works that had been created by their collaborative AI partner, Huxley, and connected them on the blockchain to living trees in a newly planted micro-forest in New Zealand, all tickets for Duran Duran at the 02 Academy Leicester are being created as special ‘proof of attendance’ NFTs. This will mark the first time that the band have moved all ticket sales onto the blockchain, giving them the ability to surprise and delight fans into the future with one-of-a-kind experiences, special offers and gifts.

These highly collectible NFTs will be limited to 1400 a night, and each show will feature a different artwork from the FUTURE PAST collection. The initiative is being powered by specialist blockchain community builders, Cub3, who will not only mint the NFTs, but can also hold them in individual wallets for those fans who have yet to have their own. After the shows, the NFTs will be tradable on Cub3’s bespoke platform should fans desire.

Duran Duran have sold more than 100 million records worldwide, scored 21 UK Top 20 tunes, 18 American hit singles, and were recently announced as nominees to be inducted by the 2022 Rock & Roll Hall of Fame – cementing the multi-GRAMMY, BRIT Award and Ivor Novello winners as one of the most successful and influential bands of all time.

With over 40 years at the forefront of British music, Duran Duran continue to play for massive crowds around the world, consistently fusing art, technology and fashion with their unique and infectious music. The Leicester warm-up shows lift the curtain on a huge summer live season that will see the band’s much-anticipated first London headline show in six years at Hyde Park, following a host of other dates at some of the UK’s most beloved venues. Dublin’s St Anne’s Park, York’s Castle Howard, Inverness’ Caledonian Stadium, The Piece Hall at Halifax, as well as headlining Rock In Rio Lisbon and The Lytham Festival. Full tour dates are listed HERE. 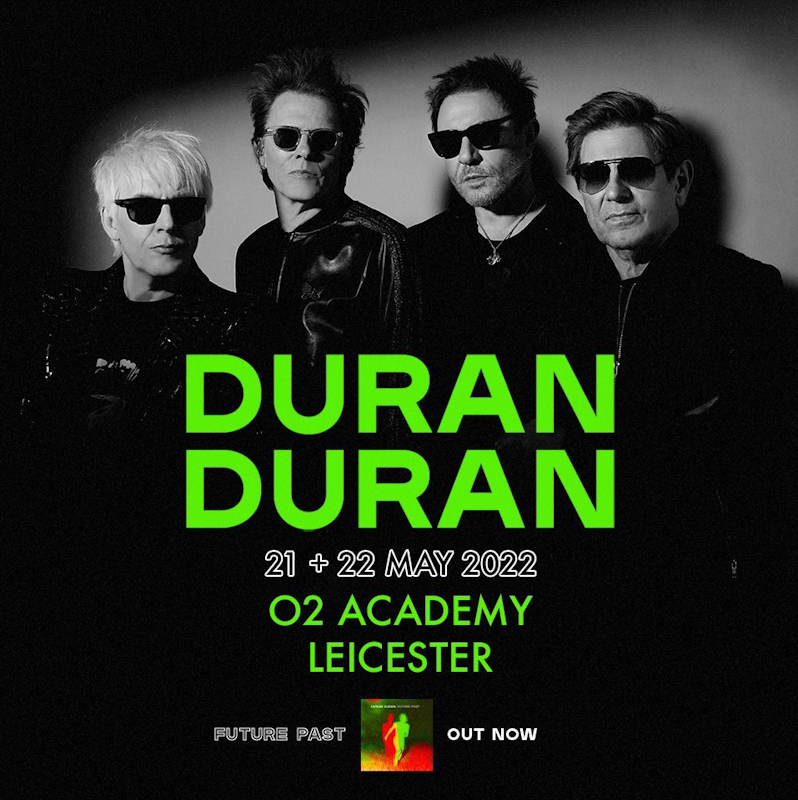 Duran Duran’s new album FUTURE PAST – their highest charting in 16 years – was met with widespread critical acclaim. It has been described as an album “that looks firmly to the future” by Rolling Stone UK, “classic Duran” by The Times, “a blast” by CLASH, “Duran Duran at their best” in The Sun and “all a fan could want” by the Evening Standard.

Today, Duran Duran share the fantastic new track ‘TONIGHT UNITED’, produced by the band alongside the legendary Italian producer Giorgio Moroder, the fourth song to be taken from their fifteenth studio album, ‘FUTURE PAST’, set...