Badly Drawn Boy, aka Damon Gough, is set to make his eagerly-awaited return with the release of a new album through AWAL on the 22nd of May 2020.

‘Banana Skin Shoes’ features fourteen brand new tracks including the political pop of current single ‘Is This A Dream?’ and sees Gough pushing forward yet again both musically and lyrically whilst retaining some of his classic trademarks. The bulk of the album’s production was completed at Eve Studios in Stockport last year with producer Gethin Pearson (Kele Okereke, JAWS) who also mixed the whole record. Damon had previously worked on tracks for the album with legendary producer Youth (The Verve, Paul McCartney) at his studio in London, Keir Stewart (ex-Durutti Column) at Inch Studios and Seadna McPhail at Airtight Studios.

Check out ‘Banana Skin Shoes’ - BELOW:

Always one to wear his heart on his sleeve, Gough’s ninth album and first studio album in a decade is a truly personal and heartfelt collection of songs, a huge statement of intent, and the most glorious, colorful warming, honest pop record you’ll probably hear all year. From the blast of the opening title track and forthcoming single with its riotous Beck-meets-Beasties ‘cartoony’ hip hop throw down to the immaculately tailored closer ‘I’ll Do My Best’ a nod to his failings, a prayer to his partner and a lyrical tip of the hat to his hero Bruce Springsteen; this is the sound of a songwriter skipping between musical idioms and emotional extremes with cool, calm confidence. The new single ‘Banana Skin Shoes’ is out now and accompanied by an animated video by award-winning film directors Broken Antler.

In between there’s the retro-futurist pop on ‘Fly On The Wall’, which evokes the Eighties pop-soul of Hall and Oates, the lush piano-and-strings ballad ‘Never Change’ and the Motown-like soul stomper of ‘Tony Wilson Said’; a celebration of the late, great fixer of the Manchester music scene. ‘I Need To Someone To Trust’, which begins with a delicious nod to Chicago’s soft-rock classic If You Leave Me Now, is a spiritual song of salvation-seeking, and quite frankly, air-punching while the beautiful, embracing and loving ‘I Just Wanna Wish You Happiness’ sees him dig deep and alchemize the trauma of a break - up into a song of salutation to his ex. 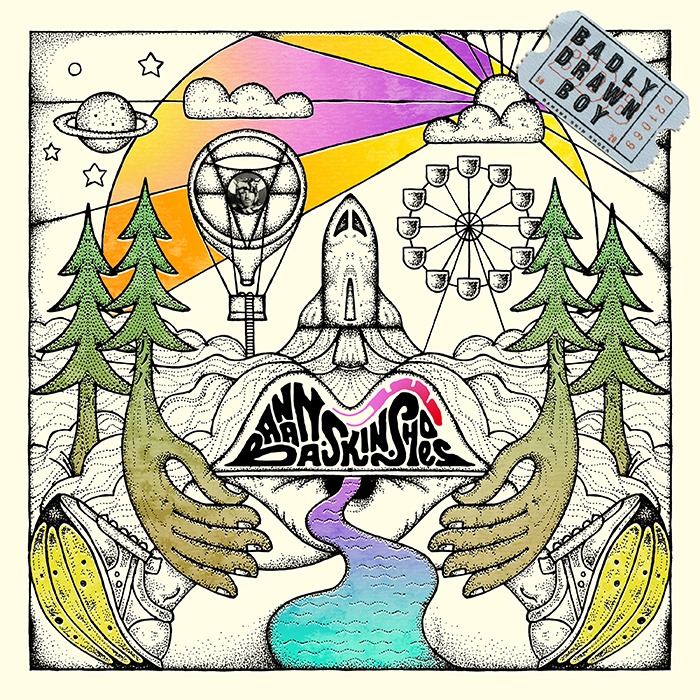 03. ‘I Just Wanna Wish You Happiness’

Following on from his recent London sell - out show in January at The Roundhouse, the Mercury Music Prize winner will be announcing further live dates over the coming months. More details to follow.

To celebrate the 15th Anniversary of The Hour of Bewilderbeast album, Badly Drawn Boy is proud to announce ‘The Hour Of Bewilderbeast’ UK tour. The tour begins in Bristol at St George’s on July 24th...

To celebrate the 15th Anniversary of The Hour of Bewilderbeast album, Badly Drawn Boy is proud to announce ‘The Hour Of Bewilderbeast’ UK tour. The tour begins in Bristol at St George’s on July 24th...