One of the most essential punk record labels ever, Stiff Records has announced a brand new range of official merchandise adorning their iconic logo and their now infamous slogans on a wide range of t-shirts, bags, and pin-badges.

To celebrate the launch of the new range, XS Noize is giving away a Stiff Records t-shirt and Tote Bag to a lucky winner. For a chance to win, simply LIKE, SHARE & RETWEET via the social media links below. The competition closes on Monday 6th December. 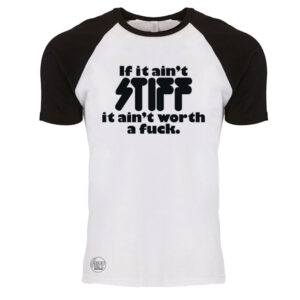 The classic Stiff slogan from The World's Most Flexible Record Label, printed on a white t-shirt with black contrast raglan sleeves, is made from 100% ringspun combed cotton. 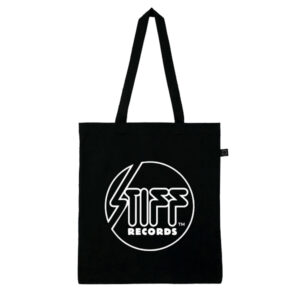 Stand out from the crowd with this Stiff Records Logo Tote Bag, made from 100% Organic Combed Cotton. As we never get tired of saying, "Stiff Records: Bags of Style Since 1976."

They are all available to buy on 19 November* from www.ifitaintstiff.com.

Stiff Records emerged on the UK music scene in 1976, driven by its innate Pop sensibility and an ability to spot commercial potential where the major multinational record companies feared to tread. The label’s debut single – Nick Lowe’s ‘So It Goes’ (STIFF BUY 1) – was released that August and was soon followed by the UK’s first Punk single, ‘New Rose’ by The Damned.

Within twelve months, it had released classic debut singles by artists as diverse as Elvis Costello, Ian Dury, Wreckless Eric and The Adverts, as well as veterans like Motörhead and Max Wall. Stiff would go on to have big hits with Tracey Ullman, Lene Lovich, Rachel Sweet, Kirsty MacColl, Madness, The Pogues, Ten Pole Tudor, The Belle Stars, Dave Stewart with Barbara Gaskin, and Jona Lewie.

Billing itself as “The World’s Most Flexible Record Label”, Stiff had a reputation for provocative and witty marketing, with an appeal that extended beyond fans of the music. Other slogans included the now (in)famous "If It Ain't Stiff, It Ain't Worth a F*ck", along with the vinyl referencing, "In '78 everyone born in '45 will be 33-1/3", the self-mocking, "If they're dead, we'll sign them" and "When You Kill Time, You Murder Success”.