Island Records and UMC today announce a new limited edition vinyl reissue from U2 celebrating the 40th anniversary of the band’s first release Three. Remastered in 2019 and pressed on 180gsm black vinyl, this limited edition vinyl EP Three (1979) will be released on 29th November 2019 via independent retailers. For details of participating record stores visit www.recordstoreday.com.

Originally released in Ireland in September 1979, the Three EP features three songs recorded at Windmill Lane Studios in Dublin with producer Chas De Whalley – ‘Out Of Control’, ‘Stories For Boys’ and ‘Boy-Girl’.

The A-side was chosen via a listener poll on Dave Fanning’s RTÉ (Irish national radio) music show. All songs have been remastered for this reissue 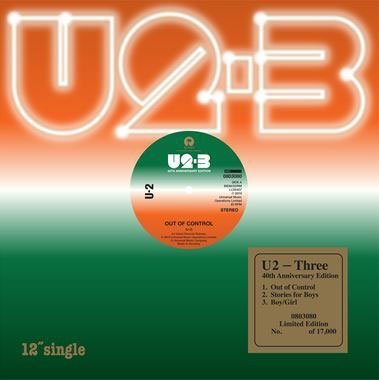 How time flies, in the Fall of 2021 U2’s Achtung Baby will be thirty years old. For myself and many others, this album not only represented some of the best of U2’s creative abilities but […]

U2 unveil the official video for “You’re The Best Thing About Me,” Watch Now!

U2 have released the official video for “You’re The Best Thing About Me,” the first single from their highly anticipated 14th album, Songs of Experience set for release later this year. The video, directed by […]