Timmy Trumpet: DJ, producer and live instrumentalist Timmy Trumpet is undoubtedly one of the most prolific performers in the DJ Mag Top 100. An award-winning, multi-platinum selling recording artist, Timmy has forged his way to the top of the industry alongside other influential artists taking the world by storm. His breakthrough release “Freaks” has reigned in over half a billion streams, reached six times platinum status in Australia and dominated the charts in ten countries, becoming the highest selling track of all time on Ministry of Sound Australia. His music career boasts an extensive resume spanning over twenty years from early beginnings as a classically trained jazz musician. At the age of thirteen Timmy was named ‘Young Musician of the Year’ before being granted a full scholarship to the Conservatorium of Music, where Sydney Symphony Orchestra’s Anthony Heinrich tutored him. Within two years he secured a position as the leading solo trumpet player in the Australian All-Star Stage Band, taking part in an extensive European tour covering some of the world’s biggest jazz Festivals.

JONAS BLUE: Following the release of his hit single ‘Polaroid’ featuring Liam Payne and Lennon Stella, unstoppable UK producer/songwriter Jonas Blue has dropped his debut album ‘Blue’, out now via Positiva/Virgin EMI. ‘Blue’ contains all the songs that have seen Jonas Blue explode into the charts and go from strength to strength. Ever since he burst into the global conscience with ‘Fast Car’, a cover of Tracy Chapman’s classic which has gone 2 x platinum in the UK alone, Jonas has sealed his position as one of the UK’s biggest breakout stars, accumulating over five billion streams, 5 UK platinum singles (all featured on ‘Blue’), and over 30 million single sales worldwide.

With ‘Rise’ fast becoming one of the biggest hits of the year (with over 680 million global streams already), and new single ‘Polaroid’ hot on its heels with over 40 million streams, the long-awaited ‘Blue’ cements Jonas’ position as a superstar producer and master pop songwriter. Pulling in a host of A-list guest features as well as new and upcoming artists, ‘Blue’ includes a collaboration with the much hyped Canadian/Columbian singer-songwriter Jessie Reyez as well as tracks with Joe Jonas, Zac Abel, Nina Nesbitt, Liam Payne and Chelcee Grimes.

Having already enjoyed 4 x BRIT award nominations as well as being certified platinum over 100 times around the world across his past singles (Fast Car, Perfect Strangers, By Your Side, Mama), and ‘Rise’ also hitting platinum status in the UK, Jonas has enjoyed a hugely successful Ibiza residency at super club Hi, running throughout the whole of the Summer.

Recently launching his record label, Blue Future, as well as spending the summer playing festivals around the world, Jonas Blue has also worked on remixes and collaborations for the likes of Ellie Goulding, Becky Hill, MK, James Bay and Sabrina Carpenter.

FEDDE LE GRAND: Enjoying artistic freedom afforded to only an elite few, Fedde Le Grand is a masterful pioneer of electronica, considered by countless fans and artists as one of the single most defining figures in house music. Whether as DJ or producer, Fedde’s influence can be felt throughout the electronic landscape; his creative beats, grooves, melodies and rhythms surround us all and have done so for many years. He’s been credited countless awards and remixed the biggest artists around – from Coldplay, Madonna, will.i.am, Robbie Williams, Everything But The Girl, and Fatboy Slim, to Shakira, Rihanna, Mariah Carey, Faithless, and his own all-time musical inspiration Michael Jackson. He’s featured the top half of the acclaimed DJ Mag Top 100 for well over a decade and has just returned to an incredible #22 after first entering at the same position all the way back in 2007. Le Grand is here, to stay. When it comes to solo records it was the seminal electro track ‘Put Your Hands Up For Detroit’ that not only brought Le Grand to global attention, but breathed fresh life into a stagnant house scene.

MaRLO: Australia’s number 1 DJ, MaRLo has become synonymous with a sound and a feeling that has electrified crowds worldwide. Dutch-born and Australian raised, the globally in-demand DJ and producer has constantly evolved his own “MaRLo sound”, cementing his reputation as a genuine musical powerhouse. As well as his number 1 ranking in Australia’s “ In the mix” voting competition, he was also ranked #49 in the DJ Mag 2016 poll.

Jay Pryor: If your first big break was a co-production with Steve Aoki on Louis Tomlinson’s smash hit single Just Hold On you’d think you’d made it, but young Irish house producer Jay Pryor seems to upgrade his goals daily.

Just Hold On has over 500 million streams worldwide and was a UK new entry at #2 and #51 on the US Billboard Hot 100 last December. The single also topped the US Billboard Dance Chart, went Platinum in thirteen countries and Gold in another thirteen including the UK and US. 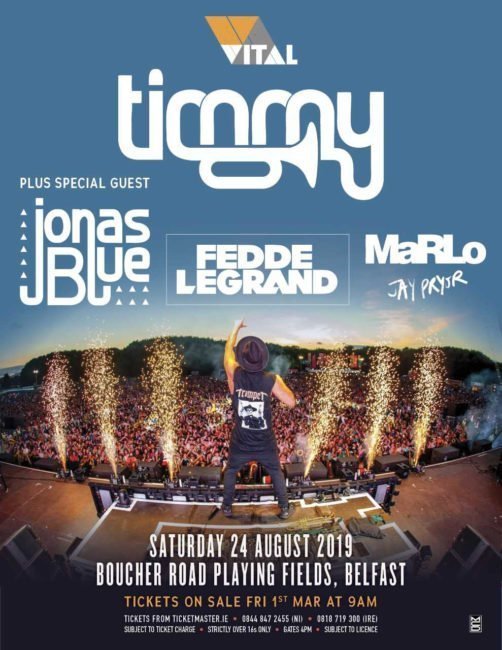 LIVE REVIEW: U2 TAKE OVER BELFAST

U2 – SSE ARENA, BELFAST 18 November 2015 U2 last played as a full band in Belfast during the Pop Mart tour when the people of Belfast welcomed them with open arms to play Botanic […]

The biggest selling Irish act in both 2017 and 2018, and the nation’s hottest musical export in decades, Picture This have announced a headline Belfast Belsonic show in Ormeau Park on Sunday, June 28th 2020. […]

Foo Fighters have announced Frank Carter & The Rattlesnakes and Hot Milk as special guests for their Belfast and Dublin dates at Boucher Road on 19th August and RDS Arena on 21st August. These will […]