Following the release of their universally acclaimed album Where The Action Is, The Waterboys release new video for the track, London Mick.

Clocking in at just over three minutes, London Mick is a visceral rock’n’roll tribute to legendary Clash guitarist, Mick Jones. Rendered in Mick’s own style circa 1977, this melodic stomper retools the passion punk with lyrics that are both moving and entertaining, retelling Mike’s personal encounters with Mick.

The video was shot by Mike in Tokyo’s Yoyogi Park, where a group of rockabilly fans known as The Harajuku Strangers dance each Sunday to their favourite vintage rock-and-roll records. Mike writes:

Tokyo has a long tradition of rockabilly fandom, and since the 1980s groups of rockabilly, cats have gathered every Sunday at the city’s Yoyogi Park to dance to their favourite records.

When I was there a few months ago I went to see for myself. It was a cold day and about ten rockabilly cats were dancing while very loud vintage Japanese rock and roll played through an amplifier. There were as many women as guys, and all were dressed in black leather or blue denim, with red handkerchiefs dangling from their back pockets. Some had the name of the gang or club emblazoned on their jackets: STRANGERS. The guys had quiffs and long winkle picker shoes.

They did elaborate, demonstrative dancing, a cross between the twist and a rockabilly ballet with the guys doing splits, leaps, high fives and cool hair-slicking movements; the girls rhythmic steps and elegant, refined moves. A couple of grandees in expensive coats and frozen black quiffs watched but never danced. As Iggy Pop said when he saw his band The Stooges for the first time, I was most impressed. Here was the original spirit and style of rock and roll, preserved, alive, magnificent.

I loved this gang, these “Strangers”, instantly. I shot five minutes of film on my phone, shared a few words and a handshake with a tall, young bequiffed cat in blue, and a few months later gave the clips to my bandmate Steve Wickham, who synched his favourite bits to a rock and roll track on our new album, London Mick, itself a tribute to another embodiment of rock and roll, Clash and B.A.D. guitarist Mick Jones.

With the help of Shoe Nakamura from our Japanese record label, Traffic, we tracked down the Strangers, or more properly The Harajuku Strangers, named after the artistic area of Harajuku, bordering the park where they dance. They kindly gave permission for us to use the film, and told me a bit about their club and its history.

The Harajuku Strangers were formed in 1990 by Jess Hamanaka, a rock and roll cat who moved to Tokyo from the provinces. The Strangers’ inspirations included old rock and roll, American Graffiti and The Stray Cats, and like most Japanese rockabilly fans they were influenced by the Tokyo rockabilly culture shop Cream Soda (still trading in Harajuku). In those days as many as 2000 rock and roll fanatics would gather on a Sunday, guys in black jeans and girls in fifties’ bell dresses. But The Strangers created a different style, with girls as well as guys wearing leather and denim jackets. Now only the Strangers have survived from those days and still carry the torch of rock and roll at Yoyogi Park. Their current leader is Kazuyo Inui (one of the cool, ponytailed ladies in the video), and as the film shows, the club includes young dancers as well as experienced, cool old hands. The generations of rock and roll flame-holders are still coming through.

Check out the video for ‘London Mick’ – BELOW:

London Mick is taken from Where The Action Is, a 10-song genre-defying album that is a testament to Scott’s enduring talents. One of the finest British songwriters of the past four decades, his songs have been covered and/or recorded by artists including Prince, who crafted two different arrangements of Scott’s classic The Whole Of The Moon, Rod Stewart, Tom Jones, Steve Earle, and Ellie Goulding, who had a top three hit in 2013 with How Long Will I Love You.

Diverse in breadth, Where The Action Is is an album of incredible songwriting, experimentation and musical brilliance. It will excite Waterboys fans and new converts alike.

Where The Action Is tracklist: 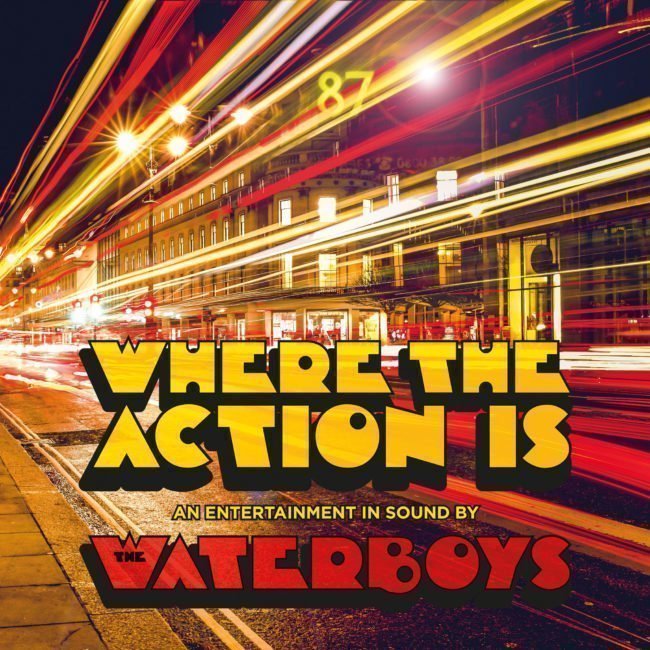 Following a successful recent tour, next month the band head out on the road to play festivals and Scottish dates. For more information visit:

The Waterboys have revealed another brand new track, the hauntingly atmospheric ‘Postcard From The Celtic Dreamtime’. Showcasing the spoken word nature of the second half of new album Good Luck, Seeker, the lyrics describe an […]

Wilco and The Waterboys will top the bill at Black Deer Festival in South East England, next June. Jeff Tweedy and co – who released their 11th studio album ‘Ode To Joy’ this month – […]

ALBUM REVIEW: The Waterboys – Where the Action Is

Mike Scott’s inspired creation of the legendary band The Waterboys has produced a storied discography that defies genre labels. The band has wholeheartedly participated in the Big Music movement, redefined themselves as raggle-taggle folkies and […]