Pop-punk 4 piece Like Giants have announced their first-ever UK shows later starting later this month. The band will be supporting Victory Lane in Stoke on Trent and London.

You can see the band at the following dates:

Speaking about their first shows frontman Daniel Kai said “We’re so stoked to bring our high energy performance to 3 of the biggest historical rock cities in the UK. To have Stoke, London and Birmingham as the first 3 shows we play is unreal! Debuting our, ‘Live Career’ in Stoke-On-Trent, being surrounded by the resonating stories of ‘Slash and Lemmy’, brings with it a desire to prove yourself amongst the best. Knowing London and Birmingham crowds bring the fire, we can’t wait to share this moment with them, and whoever wants to get hot and sweaty with us. Everything we have been working on for the past couple of months boils down to this moment, we just hope you’re all ready for what we’re about to bring!”

Like Giants are a 4 piece Pop Punk band from the Midlands, UK. The band formed in 2019 and will be announcing new music very soon. Bringing with them heavier riff-driven tracks, with hard-hitting, but also soft melodic vocal melodies, this has helped them set themselves apart from the ever-expanding Pop Punk genre.

Influenced by; Neck Deep, A Day to Remember and State Champs, Like Giants write songs covering topics like mental health, relationships, and life in general through punchy riffs, and very catchy choruses. 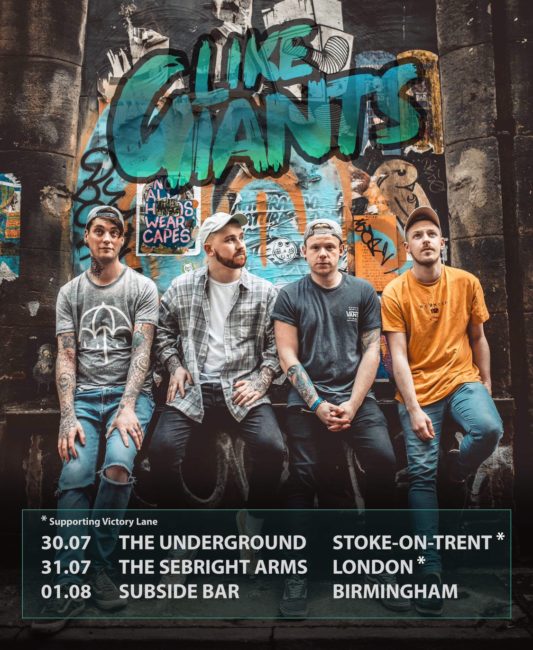