Dublin’s The Murder Capital release the first of a series of live videos from “When I Have Fears” with a passionate performance of “Green & Blue”.

The release follows last night’s live session and interview for Steve Lamacq on 6 Music, where they have also been B-listed for latest release “Don’t Cling To Life”, that you can listen to again HERE

he Murder Capital have seen previous single releases – “Feeling Fades” and the 12″ of the aforementioned “Green & Blue” – top the vinyl charts already this year, and last month announced a series of strictly limited in-stores and intimate performances for later this month: 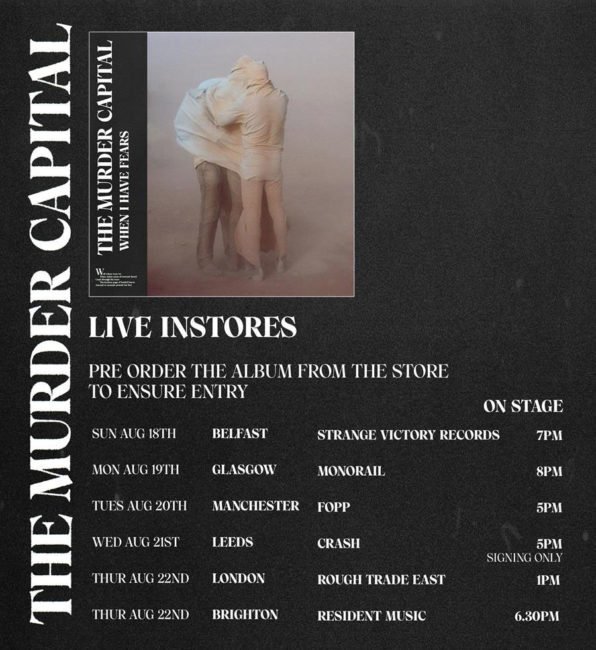 The signings and in-stores are in support of their much-anticipated debut album, “When I Have Fears”, set for release on August 16th through Human Season Records.

Produced by Flood (PJ Harvey, New Order, Foals) the album features all three singles from the band so far, “Feeling Fades”, “Green & Blue” & “Don’t Cling To Life”, as well as the first studio recording of breakthrough track “More Is Less”.

An exercise in both darkness and light, “When I Have Fears” only serves to highlight the early ambition in the band’s sound. From the post-rock build and breakdowns of the two-part “Slowdance”, to the tender, bruised confessional of “On Twisted Ground” and industrial pulse of closer “Love, Love, Love”, there’s a consistent intensity throughout that marks out The Murder Capital as a band arriving fully formed on their debut album.

As well as festival dates across the summer, the band will head out on two headline tours – once in July and again in October / November.

Full dates below with tickets available from www.themurdercapital.com

You can catch the band live on the following dates:

Irish rap artists Kojaque & Luka Palm are pleased to announce a headline show at The Limelight 2, Belfast on Wednesday 11th September 2019. Kojaque and Luka Palm will follow up the release of their […]

Multiplatinum Icelandic quintet OF MONSTERS AND MEN have announced a run of the UK and European dates in support of their new album FEVER DREAM out 26th July. Fans who pre-order FEVER DREAM between Thursday […]