The Cribs, who recently announced their return with their brand new eighth album, Night Network, which is released via Sonic Blew/[PIAS] on Friday, November 13th 2020, have today shared details of a U.K. tour in June 2021.

The details of the tour, which includes appearances at the Roundhouse in London and an outdoor show at Halifax’s historical Piece Hall, are as follows:

Tickets for the shows go on pre-sale at 9 am on Wednesday, August 26th 2020 and general sale at 9 am on Friday 28th August and are available via www.gigsandtours.com (London, Birmingham, Newcastle and Manchester) and www.seetickets.com (Glasgow and Halifax).

Night Network was self-produced and recorded at the Foo Fighters Studio 606 in Los Angeles in the spring/summer of 2019 and was recently heralded by the fantastically creative, socially distanced video for lead track Running Into You - co-directed by Andy Knowles & Nick Scott and featuring acclaimed actor Sam Riley.

Having released their Steve Albini engineered album, 24-7 Rock Star Shit – their fourth consecutive UK top 10 album- in August 2017 the multiple Q and NME Award-winning band return after almost 3 years of business wranglings and self-questioning with an album which is as fresh, cathartic and vital as anything they’ve ever put out. There’s no weariness, no bitterness, just a clear desire to get back to doing what they do best – that unique blend of bittersweet melody, brutal lyrical honesty and riffs for days.

No indulgence is made to the band’s struggle. Instead, it’s wall-to-wall Cribs bangers, the fruit of that special, symbiotic relationship between the songwriting, singing brothers, drawing on the boiled-down influences they felt had always been there: The Motown stomp of 'Never Thought I'd Feel Again' and 'Under The Bus Station Clock', red and blue album-era Beatles ('Running Into You' and 'In The Neon Night', respectively), melodic 70's style pop on 'Deep Infatuation’, and even early work by their own band.

In a typically downplayed way, the band have honed in on what’s so special about The Cribs: really bloody good songs. Fans might well think this is their best album in a decade. So, once again all is right in the Cribs world – or as much as all is right in any world in 2020 at least. The Cribs are romantics and they’re realists, and the balance, for a hot minute, nearly tipped in the favour of the latter. But now they return empowered, beholden to no one, on the greatest form and still screaming in suburbia. 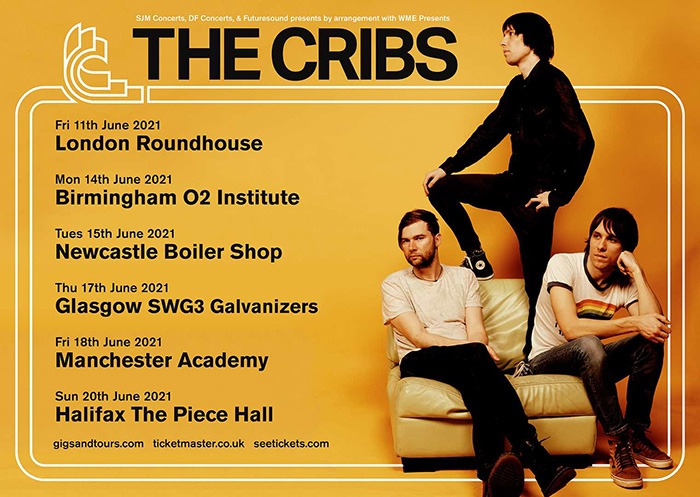 Following the recent announcement of shows in Glasgow and London, The Cribs are pleased to confirm details of further shows throughout the UK in October. The band celebrated the arrival of their sixth album ‘For all...

‘Different Angle’ by The Cribs has quickly become a favourite on the band’s recent live outings both in the UK and on the US dates. The video footage was recorded and collated whilst at home...

The Cribs are pleased to announce news of two UK dates this Autumn. The band follow their sold out run of UK dates earlier this year with a couple of shows at London’s Roundhouse and...