Spector has returned with new single 'Half Life.'‘Half Life’ is the second piece of new material to surface from the five-piece in 2019, after the band made a surprise return with the mammoth ‘I Won’t Wait’ earlier this year, and is taken from a forthcoming EP, due this autumn through their own Moth Noise imprint.

The single sees Spector embrace their less urgent side, and instead showcases their adept ability to layer sounds effortlessly and weave them around sublime melodies and poignant lyrical work, whilst still remaining as vital as ever.

Speaking about 'Half Life', frontman Fred Macpherson said: "Half Life is about the fear of missing out on your own life. The worry that you're losing touch with people, places, culture, no longer recognising yourself in the mirror, the constant tick of the clock in the background. It's about wondering how much time you have left. But we wanted the music to be upbeat and celebratory.

There's nothing better than a group of people just losing it, all singing along to something a bit miserable. That's the life blood of the indie disco, handed down from generation to generation... Dancing with tears in your eyes"

Listen to ‘Half Life’ - BELOW:

Recently the band announced a huge UK headline tour for October 2019, including a show at London's Oval Space. Tickets are on sale now, and the full list of dates can be found below. 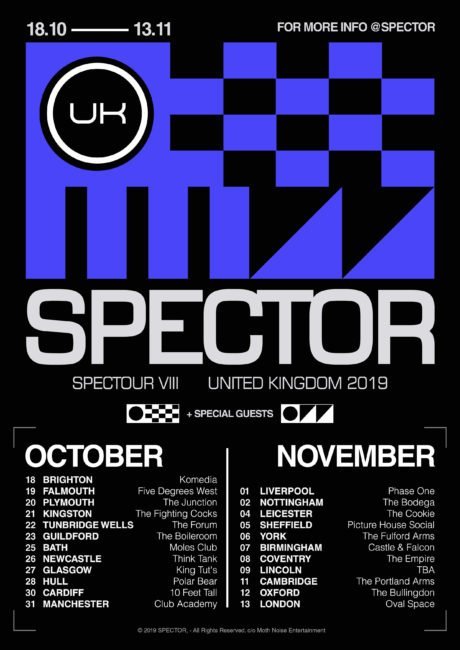 Today sees Spector unveil the stunning video for ‘Kyoto Garden’, taken from their forthcoming second album. The video has been a collaborative process with creatives from all over the world for Topman’s Openshoot project. The...

UK Rock band Spector are pleased to announce a headline Belfast show at Voodoo on Saturday 06th November 2021. Spector started performing together in 2011. They have released the albums 'Enjoy It While It Lasts'...