Celebrated artists in their own right and friends for the past fifteen years or so, the pair have finally managed to coordinate diaries and almost a decade on from their debut, 2011’s Funny Looking Angels, have emerged with Only Smith & Burrows Is Good Enough.

Only Smith & Burrows Is Good Enough, whilst nurtured and written in the UK, was recorded in Nashville with the Grammy Award-winning producer Jacquire King (Tom Waits, Kings Of Leon, Norah Jones). The record is on occasion, tongue-in-cheek whilst at other times depicting the advancing of age and family life, changed priorities, and all that it entails.

Tom describes the track as, “a song about looking back fondly at broken relationships, moments in your life that were never gonna last, that when viewed through a hazy nostalgic filter seem so much more beautiful than they ever probably were ... just like Top of The Pops….”

As songwriters, both Tom and Andy have scored some big hits, Only Smith & Burrows Is Good Enough is a collection that shows off their outstanding song-writing that traverses their respective catalogues. The album is a collaborative writing experience and the pair share vocal duties across its tracks from propulsive power-pop of ‘All The Best Moves’, the calypso-tinged virtuosity of Buccaneer Rum Jum or engaging traces of OMD amidst Bottle Tops.

Tom’s paean for his former home in London with the wonderful Parliament Hill jostles for highlight credits with the rom-com movie-esque Aimee Move On that itself stirs up its own typhoon of beauty with luxurious harmonies drawing on a similar vein of classic 70’s pop that the likes of 10CC demonstrated so brilliantly. Whether euphoric or more inward gazing Only Smith & Burrows Is Good Enough with its ever-present melodies and well-crafted song-writing may have been slow to progress over the years’ but its eventual arrival is a welcome respite in these uncertain times.

Smith & Burrows new LP “Only Smith& Burrows Is Good Enough” is due for release 5 February via [PIAS] Recordings. 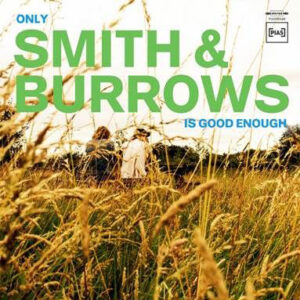 1. All The Best Moves

EDITORS announce the release of their best of album 'Black Gold', out October 25th

In continuation of what’s been one of the most prolific creative streaks of their 15-year career, Editors have today announced the release of their best of album Black Gold, out October 25th via Play It Again Sam. Black...

Editors frontman and multi-instrumentalist Tom Smith and multi-faceted musician and songwriter Andy Burrows today share the video for ‘Parliament Hill’, the second track to be revealed from their collaborative new album Only Smith & Burrows...