Record Store Day, the annual celebration of the UK’s independent record stores, is excited to announce Noel Gallagher as the official ambassador of this year’s celebrations.

With his long history of supporting indie record stores and already five Noel Gallagher’s High Flying Birds Record Store Day releases (which have been amongst the event’s best-selling vinyl), Noel Gallagher is undeniably the perfect artist to take on this year’s ambassador role.

Upon being enlisted as the ambassador for 2021’s event, Noel said:

“Record shops were really important when I was growing up. It’s something that’s in my DNA. I think if we can keep record shops open for as long as possible, we owe it to the young people of this country. For this year’s Record Store Day I’ll be getting involved. I’ve got something unique coming out. Hopefully, the fans will like it and they’ll keep the flame burning for your local record shop.”

And as part of his official role as Record Store Day’s ambassador, there will also be a special limited-edition, numbered, hand-pressed, coloured double LP version with an exclusive art print created for indie record stores and released on first Drop on 12th June.

This year’s Record Store Day event is set to take place across two Drops on the 12th June and 17th July. Hundreds of artists are releasing special and exclusive vinyl records to support the 250 shops that have faced enforced closures for more than three months this year alone. This means that the success of this year’s Record Store Day event will be more important to retailers than ever before.

Every year Record Store Day enlists one record store loving ambassador to fly the flag on behalf of record shops up and down the country. In previous years the role has been taken on by the likes of The Big Moon, The Mighty Boosh, Rag n Bone Man, Sir Elton John, Kae Tempest and Izzy Bizu, among many others. The ambassador works in tandem with Record Store Day to encourage music lovers to support their local record store and discover the joys of vinyl.

Noel Gallagher, who joins the star-studded roster of previous ambassadors, was the principal songwriter, guitarist and occasional lead vocalist of Oasis - one of the biggest bands ever to emerge from UK. Noel has an unprecedented ten consecutive chart-topping studio albums in the UK so far in his career, with three consecutive Number Ones and over 2.4 million album sales globally for Noel Gallagher’s High Flying Birds.

Record Store Day is widely regarded as the catalyst behind the phenomenal resurgence in vinyl as sales topped more than 5m units in the UK in 2020 - this is compared to just 205k in 2008 when Record Store Day began. Though there is a still a long way to go, the success of the event has sparked a huge turnaround in fortunes for the nation’s independent record stores who have weathered the coronavirus pandemic with unwavering resilience and ingenuity. 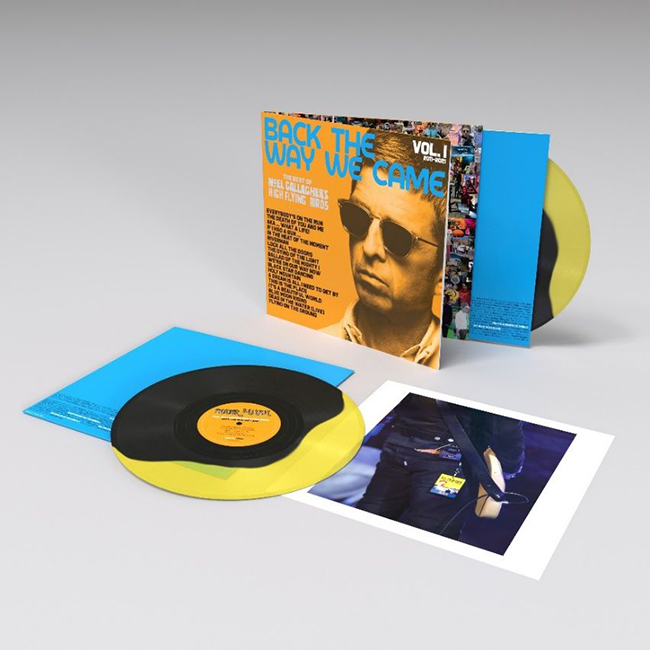 Curated and compiled entirely by Noel, the tracklisting of ‘Back The Way We Came: Vol 1 (2011-2021)’ encompasses songs from High Flying Birds’ three UK Number One albums (‘Noel Gallagher’s High Flying Birds’, ‘Chasing Yesterday’ and ‘Who Built The Moon?’) and the three recently released and highly acclaimed EPs (‘Black Star Dancing’, ‘This Is The Place’ and ‘Blue Moon Rising’). ‘Back The Way We Came: Vol 1 (2011-2021)’ also features two brand new songs produced by Noel Gallagher & Paul ‘Strangeboy’ Stacey, ‘We’re On Our Way Now’ and ‘Flying On The Ground’. A songwriting masterclass that sits effortlessly in one of the great songbooks, ‘We’re On Our Way Now’ was unveiled last week, a taste of the future-fan-favourites to come.

B1. Riverman
B2. Lock All The Doors
B3.The Dying Of The Light
B4. Ballad Of The Mighty I

Noel’s latest single is announced as ‘Ballad Of The Mighty I’ from his new album ‘Chasing Yesterday’! The track features Johnny Marr on guitar. The official video was unveiled today Which you can watch below....

Noel Gallagher's High Flying Birds announce new single 'She Taught Me How to Fly' - the third to be taken from the Number 1 album 'Who Built the Moon?'. The single is released on 12"...

For the next instalment in their Chasing the Sun archival series, Oasis will release a deluxe reissue of (What’s The Story) Morning Glory? on September 29th via Big Brother Recordings. Just as with their recent...