They’re back! Just in time for the festive season! The most-loved musical duo Michael Ball and Alfie Boe join forces again for a magical new album ‘Together at Christmas’, out on Decca Records on 20th November. They also announced a UK and Irish Arena tour in 2021, including dates at 3Arena on 6th December and SSE Arena on 7th December 2021.

Tickets for the tour go on sale at 9 am on Friday 30th October at 9 am.

Two of the greatest voices in the world, Michael and Alfie are back doing what they love the most, but this time with an album packed full of holiday cheer! 2020 has been a year of isolation and social distancing and Michael and Alfie want to make this holiday season special, however, you’re together at Christmas.

The record has everything you could want from a Christmas album and more. The pair breathe new life into favourites such as ‘It’s Beginning to Look A Lot Like Christmas’, ‘Silent Night’ and ‘Have Yourself A Merry Little Christmas’, to name a few. Gregory Porter joins on ‘The Christmas Song’, and the duo perform the heart-warming ‘My Christmas Will Be Better Than Yours’ – a brand new original song.

Speaking of the album, Michael and Alfie say, [Michael] “Me and Alfie, together at Christmas, I can’t think of anything better! In these strange times, we wanted to create an album of songs that we like to listen to at Christmas, plus a few surprises along the way, including an original song! Hopefully, our fans will love listening to this for many years to come. This year it’s certainly going to be a Christmas we’ll never forget. Can’t wait to see you all on tour in 2021”

[Alfie] “Keeping the Christmas spirit alive seems more important than ever this year. We wanted to create a festive album that brings joy, love and happiness. Spreading the Christmas cheer is something we all need a little extra of during these challenging times, so however, people are going to be able to spend their holiday season, we’ll be right here ‘ Back Together At Christmas’ with our fans who we are incredibly grateful for and can’t wait to see in person when we’re back for a brand new tour in 2021”

‘Together at Christmas’ follows the phenomenal success of the duo’s previous three duet albums, their debut ‘Together’, which became the UK’s best-selling album of 2016 and beat the likes of Little Mix and The Rolling Stones to the Christmas No.1 spot, ‘Together Again’ which brought the pair yet another No.1 album in 2017, and ‘Back Together’ which landed them the No.2 spot in the Official Albums Chart. As a duo, they have now sold over 1.3 million albums in the UK, received two Classic Brit Awards, sold out two headline arena tours and presented three ITV Specials.

After meeting in production of Kismet at the London Coliseum over 10 years ago, it is the combination of their incredible voices, instant camaraderie and loveable personalities which proves to be irresistible to countless fans across the nation.

In an exciting announcement, hailing the opening of theatres under appropriate Covid safety restrictions, the pair are also set to return to Les Misérables: The Staged Concert in London's West End for a very special Christmas run. The show is on for eight weeks from 5th December at the Sondheim Theatre in Shaftesbury Avenue.

Tickets on sale Friday 30th October at 9 am 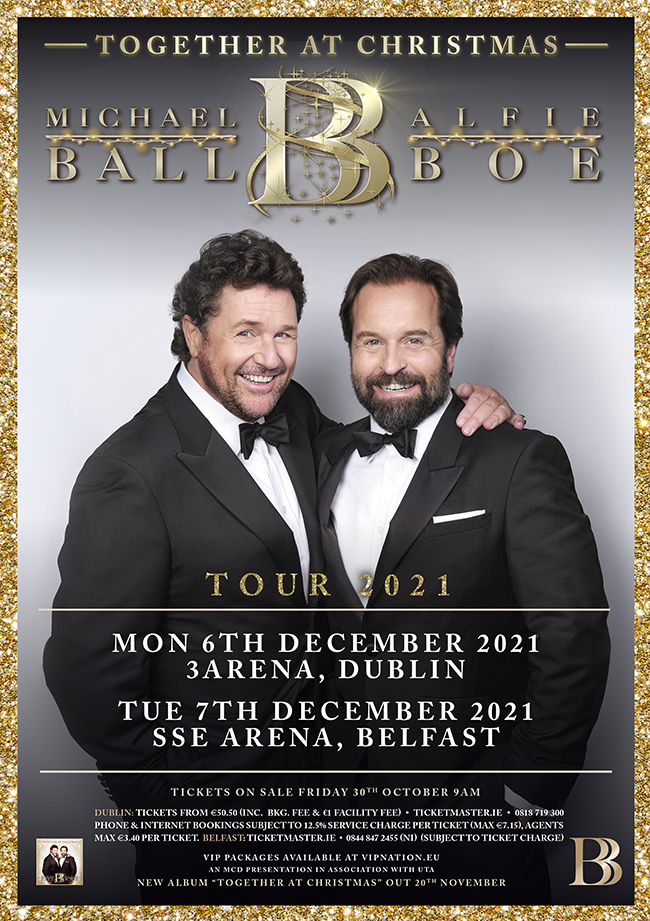 Last time Brian Fallon visited The Emerald Isle, Belfast wasn’t on the list, and this time the appreciation was wholly evident for The Gaslight Anthem’s charismatic frontman, who was joined in support by Belfast’s own...

Singular Artists proudly presents Scott Matthews plus guests live at Unitarian Church, Dublin, Saturday 13th March 2021. Tickets €20.00 on sale now from here. The singer/songwriter has challenged himself creatively during a career that has...