Tonight is one of those nights where this reviewer wouldn’t want to be at any other gig in the world. A moment in time turned into a joyous, thrilling, life-affirming experience thanks to two of the most exciting bands on the planet right now. Headlining are the Welsh outfit Estrons, who have spent the last few years building up an adoring following and honing their sound, before releasing their killer debut album ‘You Say I’m Too Much, I Say You’re Not Enough’ last month in October to a call of critical acclaim. Tonight confirms that they are also a truly seismic live act, whipping up the sort of fevered, sweaty energy that only the greatest bands can produce.

An intimate, hot, buzzing venue like The Louisiana in Bristol is the perfect place for up-and-coming acts to take the next step up, and it’s completely sold out tonight. Those lucky enough to get tickets are rewarded for arriving early with the presence of the excellent support act, Glaswegian four-piece Lucia. With a sound occasionally recalling the likes of Pixies and Belly, there are hints of Lush, as well as spells of melody that reach for Phil Spector-like heights. The title track from their new EP ‘Cheap Talk’ is an awesome brew of new wave flavours, with a big chorus and a bright zing, while ‘When I Think Of You’ is 60s pop with a biting simplicity. Blissful, bittersweet indie-pop gem ‘Summertime’ has a sugary charm, ‘Lose My Mind’s atmospheric guitars are countered with stroppy alt rock, and ‘A Little Pick Me Up’ pushes up the tempo with a helping of bouncy ska punk. Best of all is the instantly rousing ‘What Am I’, a grungy glam rock steamroller that catches the ear with its intensity and angst. As well as suggesting the influences of The Breeders and Hole, the closing ‘Melted Ice Cream’ also demonstrates the fantastic stage presence of singer/guitarist Lucia Fairfull, who goes walkabout amongst the audience, serenading members of the audience, almost like a Riot Grrrl burlesque act. After half an hour with this group, I’m already wondering where I can hear their two EPs (which turn out to be very good indeed), and feeling privileged to be made aware of them via this excellent set, which warms up The Louisiana for the headliners very effectively. 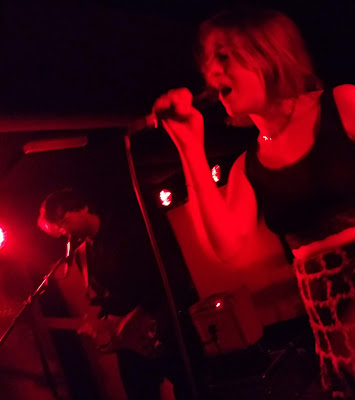 I’ve been listening to a lot of new bands over the last eight years since writing reviews and articles for various websites, yet Estrons have hit me like a bolt from the blue. A genuinely life-changing group whose personalities and experiences are channelled into astounding, energising, transcendent songs. They remind you that while life can be shit for all of us, we all have to power to turn it into something brilliant. Despite only being in their 20s, the core members of the group have already learned that life can be a tough ride, and it’s musicians like this who will never need to manufacture their emotions. Every note and word you hear is the result of their blood, sweat and tears. They teach us that we are not alone and that while we are all human, every one of us of us is a unique person. We are made up of our experiences, just like the music of Estrons is made up of theirs.

They are fronted by the lionhearted Tali Källström, a strong, determined and upfront character who sees and says things as they are. In the eyes of many here, Källström is already a star. Exactly the sort of person the music world needs right now. Intelligent, strong and not afraid to speak out. Not one artificial thing about her, down to earth and 100% human. But also extraordinary in her talent as a performer, as well as having a great vision and approach as a lyricist. When that gift bounces off of Rhodri Daniels’ electrifying riffs and brilliant musical logic, it’s an earth-shattering combination. The stormy intro of ‘Lilac’ approaches like an oncoming hurricane, before lifting off and delivering an unruly, rip-roaring opener, before recent single ‘Body’ reminds us that we are better than the image-obsessed, airbrushed culture that infects people’s mindsets in the 21st century. Estrons bring new life to guitar music with songs like this, and the sexually-charged ‘Body’ is essentially a booty shaking chunk of RnB with a filthy, heavy edge and a chorus that rocks hard. I recently hailed ‘You Say I’m Too Much…’ as the debut album of the year, awarding it a full 10 out of 10 in an album review. Some of you may be forgiven for thinking I’m sounding hyperbolic, but if you don’t believe how good this record is, just listen to the astonishing tracks that WEREN’T included on it. The menacing, gritty ‘Strobe Lights’ is one of them, thrusting forward in raucous fashion as Kallstrom’s commanding vocal rings out over its contagious, explosive drama. 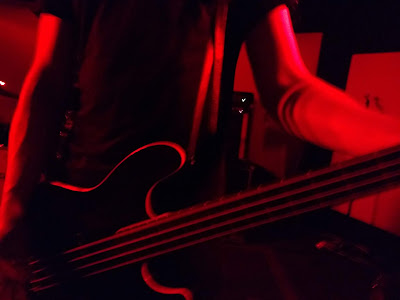 Daniels thrashes out choppy, abrasive riffage on the terrific ‘Killing Your Love’, which boils with a hotheaded temperament before unleashing a blizzard of supercharged fury, shifting into a hazardous high gear. It’s bolstered by the fat, dirty bass work of Steffan Pringle, who also does some stellar work as the band’s producer. Källström and Daniels are a partnership fuelled by the fire of their contrasting tastes and ideas, which imprint themselves into the label-defying agility of their music. Proving their versatility, the pace slows down for the beautifully sorrowful ‘Strangers’, a vulnerable and powerful moment that seems to be as warmly embraced as the more hectic numbers from tonight’s set. But the place goes nuts when they kick into the lustful, carnivorous trailblazer ‘Make A Man’, which marries the dominant female sexuality of Missy Elliot to riotous punk rock. Taking songwriting cues from a variety of unexpected places, as a whole Estrons are too multi-faceted to be labelled “punk”, although they are without a doubt a punk band in the true sense that they play by their own rules and thrive with a defiant, rebellious zest. The monster-sized ‘Jade’ sounds crushing and brutal in its live incarnation, erupting with anger and desire, while the hard-hitting temper tantrum of ‘Cold Wash’ offers more of that forceful, chugging bass. 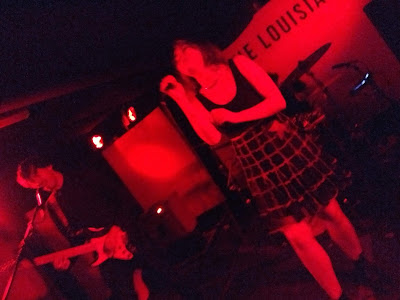 There’s an endearing warmth to the casual conversation between Källström and the crowd between songs, as well as a wicked sense of humour and an unmistakably no-bullshit attitude. You get the impression that her mood can be highly temperamental, and what else could you wish for when it results in music like this. At times we see a ball of magnetic, burning energy and a ferocious, ravenous being who could eat you for breakfast. At other times we see an admirably humble performer overwhelmed by the reaction and reception that her band’s music and words inspire, occasionally bordering on tears. The emotions reach a peak with the stunning ‘Cameras’, where the angular guitar plays against a spellbinding, hooky verse and a dazzling vocal that sends chills down the spine. Even when Estrons offer more introspective moments like this, the mood is never complacent when the feelings present themselves with such unabashed strength. Having whipped the room into an overpowering, hot, sweaty frenzy, the stinging ‘I’m Not Your Girl’ sets off the mayhem again with a sassy, ego-slaying anthem that could puncture the expectations of any sleazebag with its gutsy outbursts of ill-tempered rage, and bold resistance to unwanted sexual advances. 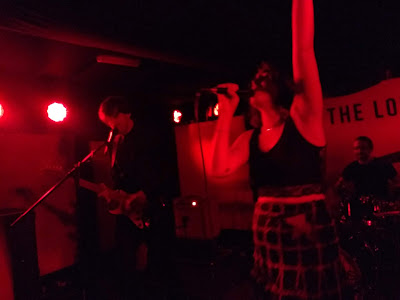 Rebelling against a world that tries to change us, the outsider singalong ‘Aliens’ finds Daniels’ direct, insistent chords building throughout until it climaxes with a violent, euphoric change of pace that punches even harder when played live. The hour blazes by in a flash, with barely a moment to breathe and the concept of time completely forgettable when not a single moment is wasted this evening. There’s a jubilant unity between band and audience, not one barrier in place as the reckless, disorderly ‘Drop’ closes the exhilarating set like a dangerously speeding vehicle racing to the finish line, signing off with a defiant rallying call before the four members of Estrons depart the stage to a rapturous

The world has been waiting a long time for a band with an insightful view on the world, and the wild confidence to present it in such a confrontational and intelligent way. Open, vulnerable confessions and honest, true statements of intent from a band whose songs have the ability to truly connect with people. Inspiring, arousing and appealing to every emotion, their music provides a pathway to the soul and a tonic for the mind. This band could even save your life.

After tonight, there is no reason why I shouldn’t declare Estrons to be the best thing that this decade has produced. I hope they go as far as they possibly can, and I hope that Tali and Rhodri never stop reaching. When you have the power to create such magic and install such a fire in people, anything is possible.

ALBUM REVIEW: Estrons – You Say I’m Too Much, I Say You’re Not Enough

“Estrons” is a Welsh word that roughly translates as “misfits” or “outsiders”, and the moniker chosen by a Welsh outfit who became hotly-tipped following three years of superb EP tracks and high energy gigs. Now, […]

Three months after the release of their critically acclaimed debut album “You Say I’m Too Much, I Say You’re Not Enough”, Estrons show no signs of slowing down, returning today to share a video for […]

ESTRONS announce debut album “You Say I’m Too Much, I Say You’re Not Enough”

The hotly-tipped Welsh alt-rock outfit Estrons last night announced their much-anticipated debut album “You Say I’m Too Much, I Say You’re Not Enough” during a session for Annie Mac on Radio 1, which you can […]