Last December, the Grammy-nominated roots-rock duo Larkin Poe teamed up with the innovative hybrid orchestra Nu Deco Ensemble for a special collaborative Livestream show from the Miami Beach Bandshell. It represented Larkin Poe’s first show in support of their critically acclaimed album ‘Self Made Man’, which reached #1 on the UK’s Independent and Americana Albums charts, and on Billboard’s Blues Albums chart.

Larkin Poe & Nu Deco Ensemble document the remarkable event in the album ‘Paint The Roses: Live In Concert’, which will be released on September 17th. They launch the album by sharing its lead track ‘Every Bird That Flies’.

Originally a sombre, swampy bluesy song, this new version of ‘Every Bird That Flies’ is reinvigorated with the sweeping orchestration of the Nu Deco Ensemble. Together, they build the slowburner skywards escalating the hushed opening ambience into a full-blooded crescendo. Rebecca Lovell’s voice rises to a towering peak, her sister Meghan’s harmonies take on a hymnal quality, and the Nu Deco Ensemble boldly hold back the full majesty of their sweeping strings to maximise the drama of the song’s finale. The performance can also be seen in the live video for the track.

Watch ‘Every Bird That Flies’ - BELOW:

The multi-instrumental Nashville-based Larkin Poe commented: "When we recorded 'Every Bird That Flies' for our album ‘Self Made Man’ we wanted the song to feel like a journey. So when the Nu Deco team suggested working up a version together we were pumped to explore a new musical destination. The song is beautifully heightened by the cinematic soaring of the orchestra and we’re so pleased to share this adventure with y’all.”

Sam Hyken (Nu Deco Ensemble) adds, "Working with Megan and Rebecca has been the definition of an ideal collaboration as they are a perfect mix of incredible talent, tenacity, warmth and humility. Arranging their genius music for this performance with Nu Deco was an honor and felt completely organic, especially for our very first Roots Rock collaboration in our 7 year history. Larkin Poe and Nu Deco have come together to create something beautiful, nuanced, and truly epic.

Every Bird that Flies was a song that both Jacomo and I immediately knew had to be a part of this collaboration. One of my favorite moments of production week with Larkin Poe was watching Rebecca and Megan’s faces when they first heard how massive the lap steel solo section of this combined with orchestra.”

The majority of ‘Paint The Roses’ features songs that originally appeared on last year’s ‘Self Made Man’ EP, with highlights including the full-bodied brass and strings embellishment of the Led Zeppelin scaled ‘She’s A Self Made Man’ and the extra grandeur of the southern rocker ‘Back Down South’.

The electrifying opener ‘Sometimes’ adds a wild abandon to the opening track from their ‘Venom & Faith’ album, but ‘Mad As A Hatter’ is the big moment for long-term fans. The impossibly moving tribute to their grandfather who suffered from schizophrenia is a huge fan favourite with 7.7 million views on YouTube of a live recording, but an official version has never been released until now. It’s a song that takes on an even more affecting tone in this setting, with the sisters’ haunting vocal interplay and Meghan wrangling every emotive note from her slide guitar solo.

Larkin Poe added: “Over the years we have drawn inspiration from a wide range of genres, but it has always been a dream of ours to find a way to honour our classical upbringing. In hearing our roots rock ‘n’ roll repertoire reinterpreted through an orchestral lens, it felt like a creative circle was being completed; we wanted to share the performance on a grander scale and, thus, our first-ever live album came into being. We are deeply indebted to Sam Hyken for writing such incredible orchestra arrangements and also to Jacomo Bairos for conducting such a magical evening of music.”

Since their inception in 2015, Nu Deco Ensemble have captivated audiences, engaging with the Miami music scene and fusing innovative, genre-bending orchestral performances and collaborations with the highest levels of musical artistry. Redefining what an orchestra can be in the 21st century, Nu Deco Ensemble celebrates living composers, reimagines all genres of music, and collaborates with a wide range of diverse musical guests, composers, choreographers, dancers, and mixed media artists.

They released their self-titled debut album in 2019, mixing interpretations of songs by OutKast with new music by some of today’s most exciting composers. They then dropped the EP ‘Humans vs Robots - An Orchestral Tribute to Daft Punk’ last year. 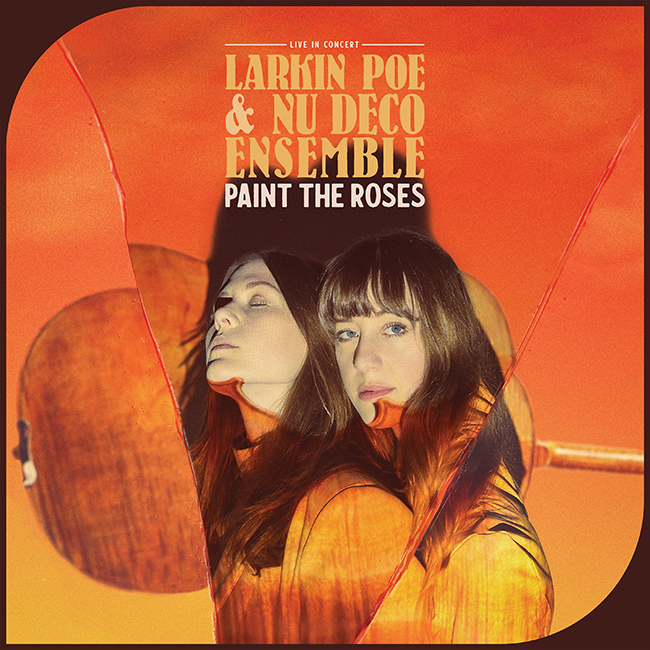 In episode #51 of The XS Noize Music Podcast, Mark Millar catches up with Megan and Rebecca from Grammy-nominated roots-rock duo Larkin Poe. Megan and Rebecca talk about the new album ‘Paint The Roses: Live...

LARKIN POE announce new album 'Self Made Man' out 1st May

GRAMMY® Award-nominated sister duo Larkin Poe have released the new single ‘She’s A Self Made Man’, which is the first track from their eagerly awaited new album, SELF MADE MAN, due out Friday, May 1st...

Larkin Poe – the GRAMMY Award-nominated duo that consists of Georgia-bred, Nashville-based multi-instrumentalist sisters Rebecca and Megan Lovell – are back with the ferocious new single ‘Bad Spell’ as well as its official music video.‘Bad...