From 2012’s ‘Upstarts’ to 2018’s ‘Spiral Cities’, and new live favourite ‘Armatopia’, the release also contains vinyl debuts for the promo-only track ‘The Messenger’, backed with an exclusive unreleased demo version of ‘New Town Velocity’. All ten 7” singles are pressed onto coloured vinyl and the set is completed by two limited edition photographic prints, exclusive to ‘Single Life’.

‘Single Life’ marks the close of the ‘Call The Comet’ tour, an 18-month run that’s seen Johnny complete a full tour across North America, major summer festival appearances and sold-out headline shows across the UK and Europe in 2019 alone.

Acclaimed performances at All Points East, Glastonbury, Nile Rodgers’ Meltdown, Edinburgh Summer Sessions, Mad Cool, Pukkelpop and many more saw early 2019 single ‘Armatopia’ fast confirmed a new live favourite. Described by Noisey as “combining Marr’s utopian fixation with crisp synths, a buzzy guitar line and visuals that recall a party at the end of the world. When life feels particularly dark, and it’s easy to wallow, a song like this says ‘fuck it – let’s dance instead.’”

Johnny’s fifth appearance at Glastonbury saw a career-spanning Other Stage set, as well as a surprise collaboration with The Killers to close the Pyramid Stage, dubbed “one of the most high-octane and spine-tingling moments of the festival” by The i Newspaper.

Summer headline gigs across the UK also included a memorable performance at Exeter’s Lemon Grove where, in a now viral video clip, Johnny invited an eager young fan on stage to join him for a rendition of ‘This Charming Man’.

Following the release of latest single ‘The Bright Parade’, Johnny was awarded the ‘Pioneer Award’ at the 2019 AIM Awards ceremony in celebration of his outstanding contribution to popular culture.

Due this December 6th, ‘Single Life’ celebrates Johnny’s first ten solo single releases to date, including highlights from 2018’s ‘Call The Comet’. The album achieved both the highest chart position (#7) and the strongest reviews of three albums to date, dubbed “a triumph” by The Guardian and “articulate and direct” by The Line Of Best Fit. ‘Single Life’ is available to pre-order HERE. 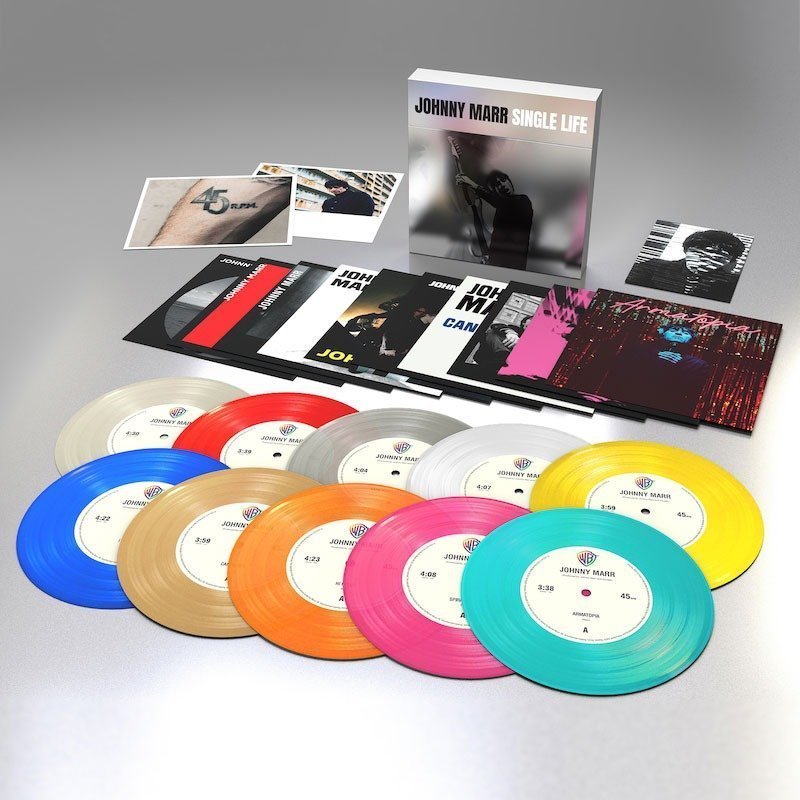 - Easy Money/Use Me Up: White vinyl

- I Feel You/Please Please Please Let Me Get What I Want (Live): Gold vinyl (including original issue postcard)

There Is A Light That Never Goes Out is a free exhibition running at Manchester Central Library celebrating the famous history of Manchester’s music scene. Curated by photographer Jill Furmanovsky the founder of Rockarchive.com and...

Following an amazing kick-off to the Meltdown Festival by Nile Rodgers & CHIC, the “Good Times” rolled on with Johnny Marr with support from the Mystery Jets. At a first glance, the choice of Johnny...

Today, five-time GRAMMY® Award-winning Darkroom/Interscope/Polydor Records artist Billie Eilish has released her latest song, No Time To Die, the official theme song to the upcoming James Bond film. The song was produced by her brother;...