After exceeding 40 million streams as a featured vocalist on Lost Frequencies’ ‘Recognise’, Flynn’s recent solo track ‘One Of Us’ ignited his solo career. It hit fifteen New Music Friday playlists worldwide, fired up Ireland’s airplay charts and instigated a new wave of attention for the young musician. Flynn’s momentum is now set to shift up another gear as he shares the follow-up ‘B-Side’. Victoria Pearson caught up with Flynn to talk about the singles, his upcoming EP and more.

You have 300 thousand streams for your recent single B-Side what is it about this track that is exciting to people?

Flynn: I think it's a new approach and it's organic although it's heavily produced. I think with this single we have homed in on the organic vibe and we have brought in a lot of brass instruments for the track. It's also really upbeat which I think helps as everyone's mood has changed over the last six months. Yes, there is a bit of fun in the song and it's a fun song. I guess that's what it is.

Was all of the music recorded during this weird kind of Blade Runner Pandemic time?

Flynn: No we recorded it before the pandemic we have been sitting on it for quite a while we knew we wanted to release it.

I was going to say a lot of people when they are recording at the moment people are in different countries, for example, a whole orchestra could be spread over the world and everyone just gets involved

could be spread over the world and everyone just gets involved virtually. The video for B-Side has you walking around in a derelict house and meeting all kinds of people and musicians. What is the story of the video and is any of it a reflection of your own mind?

Flynn: Yes so we wanted to create a simple video we didn't want to make it too abstract especially as it's my second major release. We found a derelict mansion in London which was actually an old hotel before. We wanted to tell the story of me and we wanted to do it in one take so it would be really smooth and effortless. I am looking out of the window and contemplating and then as I come back and walk through the rooms I notice that something is going on and there is a couple in the first room. That reflects on the lyrics and the song is a break-up song and it's all about a partner who wasn't very loyal. So I walk through the first room and it's supposed to be my partner with somebody else and then as I walk to the next room there is nothing there. Then in the next room, I perform the chorus and so this indicates that I am moving on in the situation.

Okay and so are there any other interesting characters that you meet in the rooms?

Flynn: Yes so you meet a guy we had an amazing saxophone player and some other guys as well.

Is that something that you find really adds to your music all the brass instruments?

Flynn: Not necessarily this record was a bit of a wild card if you like and we took a new approach to make it more organic. There is always a guitar or a piano in there somewhere whereas this time we went all out for a traditional brass section. We wanted to make it traditional but we also wanted to make it cool. Classy but at the same time cool so that it fits into 2020.

You have been working with producer Toby Scott who is famous for working with the Kaiser Cheifs. What did he bring along to your music?

Flynn: Toby brought along a sense of vision of where things should go so when you go into a session it can be hard to I suppose to build a vibe and he is always good at creating a feeling with his production Toby has a broad range of sounds and ideas and he really hones in on like drums especially he is an amazing producer when it comes to drums. So he really helps with the momentum of the song. You always get a great mix from him and he is a wicked producer so yes I highly recommend Toby.

The process after all these people have worked on the song does it feel transformed from the original song? How different is it from start to finish?

Flynn: Not really because of the way that the sessions are nowadays you go in with a producer and a writer and you kind of work on it as you go along. The producer does his bit and then the writers do their bit and you finally come away with. That process in the room is priceless and it's very very special so I don't want to change it too much especially if you come out of a session really happy and you like the song. I like to keep the buzz of the original recording and not change it too much.

With this kind of music you just keep on working on it until it's right and you have it how you love it and then after that, you have to kind of let go of it and let the music speak for itself.

Flynn: Yes in particular if you have been sitting on the song for a long time as you kind of fall in love with the song. So if there are changes to be made and people say it needs changes you can find yourself getting attached to the song so it can be hard to part ways with it when you release it out into the world it can be nervewracking. I get quite nervous when I put music out there and suddenly everyone is listening to it.

I think it's your baby and you don't want it to be too changed.

Flynn: I think it is your baby that's right.

In the early days, you took all kinds of jobs to keep going while still making music. How did that time strengthen you as a musician?

Flynn: Yes, it played a huge role in crafting my sound and my lyrics and what I write about it helped me with that mental content I wanted to create. Someone asked me that question recently about why did you move away? Why did you make things hard for yourself? I moved away from the comfort of my family and friends and moved into a totally different environment. I was sharing a house with these random guys who were twice my age. I wanted to be in these different situations to see how I would adapt and how I would grow from them I suppose. Through that, I experienced a lot and that made a lot of good content for songs.

These are baptisms of fire and they can inspire your songwriting, can't they? Because if you are in the real world and doing these jobs it might tend to inspire you?

Flynn: Yes it inspires you and then you appreciate what you have a lot more when the good things come along.

The track 'Recognise' has had 40 million streams what inspired the track?

Flynn: I wrote the song in London with other songwriters and it's about not recognising yourself and going through changes mentally and to come to terms with how you are feeling. Now it's out there.

How did you first get bitten by the bug that made you want to turn music into your career?

Flynn: When I was in secondary school I entered a talent contest and I guess in school I wasn't the most academic and I could never concentrate. I was a bold kid and I used to get kicked out of the classroom. I found it hard for me to find a place and all the teachers had lost hope in me. Then this talent show came along and people encouraged me to do it. I played in the contest in front of 900 people and it was quite overwhelming. So I did it and I won! From that day on everyone changed towards me and they had a lot more belief in me. I thought this is what I want to do as it's the only thing I am good at and I have been doing it ever since.

I think that has happened to a lot of artists from Ozzy Osborne to John Lennon. They all say the same thing, don't they? They all thought I wasn't going to do much. Then I realised I was good at music and everything just changed.

Flynn: Yes it's something that I have always been passionate about I have always found learning easier if it was more creative. If it wasn't for music I don't know what I would be doing.

Yes now, who are your biggest musical heroes?

Flynn: Amy Winehouse, Bill Withers and Eminem. I listened to a lot of Blues and Soul music when I was growing up. Anything that is organic and acoustic which rubs off on my music now. Anyone that has a good story to tell and can put it into a song and make it hooky and catchy and heartfelt and vulnerable. My own songwriting is all about putting it all out there emotionally.

Amy Winehouse was like that, wasn't she? She would make herself vulnerable.

Flynn: Yes she sung about dark subjects but she was always in the top ten on the radio.

If you could perform with any artist living or dead who would you choose?

Flynn: Probably Pharrell Williams he is incredible and just to write with him would be incredible.

He had that huge hit with 'Happy' didn't he? We could all do with some of that at the moment. What is your favourite song of all time and why?

Flynn: Bill Withers 'Aint no Sunshine When She's Gone.' I have always just loved that song and it never gets old it's just a timeless record and sometimes the music I listen to changes depending on what mood I am in. With that track, I can put it on at any time and I love it whatever mood I am in.

It's timeless and you will always just love it. Something just resonates in you. Finally, what are your plans for the future in this rather strange Blade Runner world that we are now living in?

Flynn: We have got an EP coming out next month so that's some exciting news and then yes we will just continue to release more music and hopefully when 2021 comes around we can get on the stage and perform some of these songs. The EP will feature the songs 'One of Us' 'B-Side' and we will have a lead track on the EP as well a focus track that will all be coming out soon.

Thank you Flynn it's been very interesting to talk to you.

Flynn: Thank you. Take it easy. 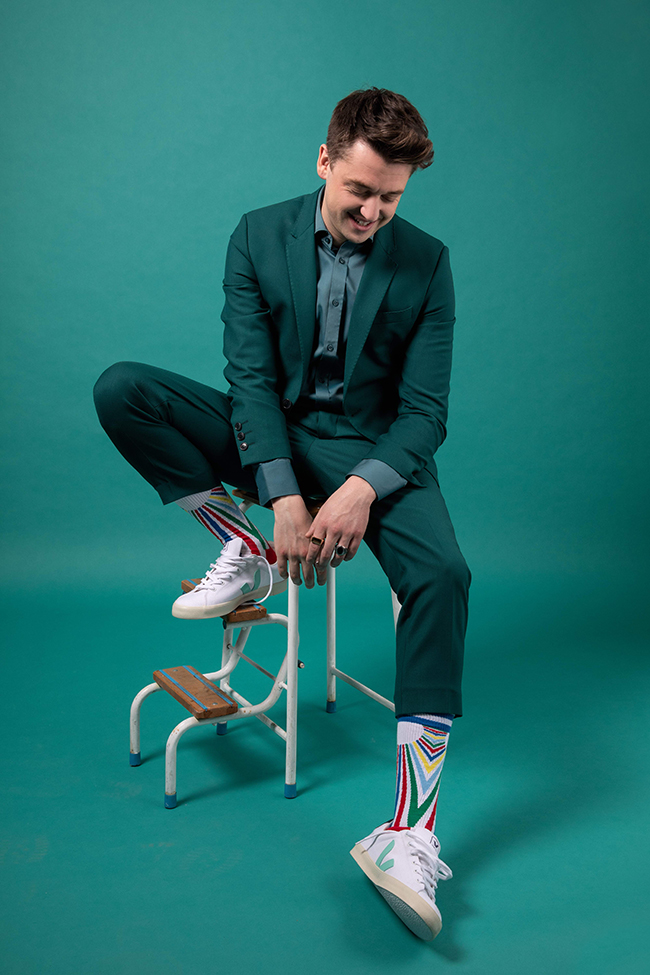 On December 31, Tomorrowland is organising Tomorrowland 31.12.2020 – a magical New Year’s Eve celebration at the end of an exceptional year, counting down to the start of 2021. This unique digital festival on the...

Flynn’s recent tracks B-Side and ‘One Of Us’ have been the perfect introduction to the young Irish singer, igniting his solo career. With almost 300k streams in just a few weeks on new single ‘B-Side’,...

Flynn made a phenomenal impact in the opening chapter of his career as he laid the foundations for his status as a future pop star. The Irish singer and songwriter first reached a global audience...