Recently, Lexington, Kentucky pop-rock duo Rags And Riches released the music video for “Crossfire,” a song about wading through all the anxieties and obstacles life throws at you and coming out sane.

Made up of brothers Tanner and Peyton Whitt, Rags And Riches formed in 2017. According to the brothers, “Our music, for the most part, is written to inspire others and spark hope for everyone to leave their legacy with the time they are given. No matter what is weighing on you in the present or feel surrounded by your stress and anxiety, let that be a part of who you are and use it as motivation. This world is yours for the taking.”

XS Noize spoke with Rags And Riches to learn more about how they got started in music, how they compose their songs, and what fans can expect in the coming months. 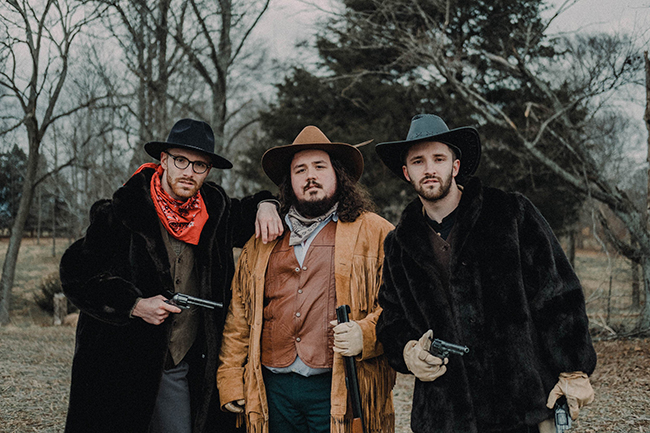 Our parents were the biggest inspiration to us. When we were young, they always listened to so many different types of music, from Dave Matthews Band to Tupac, Led Zeppelin to Garth Brooks. Needless to say, we heard it all growing up, and that sparked our love and appreciation for music as a whole. Peyton and I (Tanner) are 5 years apart, so one year for Christmas when I was 15 and Peyton 10, they purchased him a drum set and myself an electric guitar. Also, our parents were youth pastors at different churches, so we were always playing in church, and that made a huge impact on our comfortableness on stage.

The band consists of my brother Peyton and I (Tanner). He plays the drums and produces all of the music. I play guitar and sing.

What’s the story behind the name RAGS AND RICHES?

Peyton and I (Tanner) had all of these songs written and the band's concept, but no name. We could never land on the right fit. One day it finally hit me, and I just blurted out RAGS AND RICHES, not fully believing that was “The” name. Peyton asked, “What does that mean?” and I said, “No matter what kind of walk you come from, extreme wealth or poverty, we are all one people.” It stuck, and we never looked back.

It is always changing. Sometimes I (Tanner) will have a melody, a chorus, or a huge chunk of a song written, and we will go from there. Peyton also will start songs on the computer with a simple beat or something to roll with. There have been times where Peyton has written the full song, and all we need to do is tweak it to make it perfect. We never limit ourselves on writing the same way; it has always been about what comes naturally.

We wanted to do something with the word “Crossfire”, and then we started working on some of the music production and decided, “This song needs to be a collaboration.” So, we called a local Kentucky Artist named Cody Morgan and got him and his producer over to our studio. The overall concept came from overcoming personal struggles, my verse being what others say and Cody’s being his internal voice. We weren’t sure of the exact direction for the video, but we stopped and came up with the western feel similar to Django Unchained and The Hateful Eight in the middle of writing the song.

What do you hope your fans/listeners take away with them from the video?

Truthfully, we want fans/listeners to not only have a film-like experience but feel positive, and like they can take on anything in this world they put their heart and mind to.

Who directed the video, and where was it shot?

Austin Barron directed the video. He is working with us on future projects at the moment. The video was shot in three locations: Glasgow, Kentucky - Park City, Kentucky - Brownsville, Kentucky.

Do you have a piece of guilty music and/or entertainment pleasure?

Guilty music would probably be Marvin Gaye … I am a huge fan and love the vibes he brought with his music. Entertainment would be either playing Red Dead Redemption or NBA 2K; video games have been a good “out” when I need it. Haha

There isn’t any better way to express my feelings and emotions. Also, we never have created the music entirely for us. It has always been about what we want to say globally to help others with what they are dealing with.

How are you handling the coronavirus situation?

It was devastating at first. We were on a 48-day tour that got cancelled, but out of everything, I will say it has been great for us. We were able to stay in the studio and write continuously and get a better grasp of where we wanted to take the next two years of music.

Looking ahead, what’s next for RAGS AND RICHES?

We have a ton of music releasing this year. In fact, it will be the most songs and music videos we have released in a single year. We are more than ready to get on the road and see our fans and meet many new ones. Overall, just staying positive and planning for a better tomorrow!