Irish hip-hop, relegated to niche underground status prior to the ‘90s, began to emerge slowly during the ‘90s and over the course of the last two decades has become virtually mainstream.

One of the most innovative Irish hip-hop artists goes by the name Uwmami. Her latest single, “Goldfish,” featuring Awesimon, defines her evolving creativity and unique sound, a blend of syrupy, oozing textures and rippling leitmotifs.

Uwmami spoke with Randy Radic about her backstory, the derivation of the name Uwmami, her definition of tone, and how she shapes texture, structure, and themes into her singular sound. 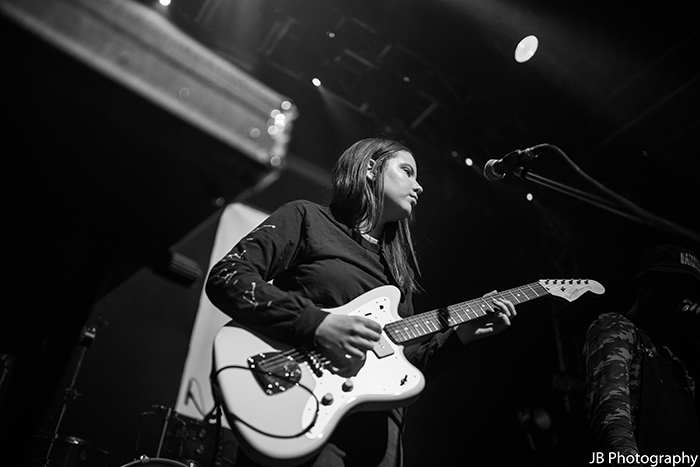 What three things can’t you live without?

My dog Steve, music, and yoga.

I started off playing the guitar when I was younger and always was into finding new artists, listening to albums, and curious about how different sounds were made. I started recording guitar on my phone via Garageband a few years ago, trying out production ideas and it gradually became more structured, then I started studying sound engineering and expanding my musical knowledge, being able to take an idea from my head to a finished song by myself became really satisfying, so I ran with it.

Don’t really have one.

What’s the story behind the name ‘Uwmami?’

Umami is supposed to be the fifth taste- not quite sweet, salty, sour or bitter, but a combination of all four that alchemises into something new you can’t quite define. That’s what I’m always trying to make musically, I’m never trying to adhere to specific genre rules, but I am trying to hit a certain sweet spot that’s a combination of different genres. The first time I thought of that concept translating into a musical context was before I had even started producing – I used to make umami playlists just for myself to listen to. I think the first track that resonated with that idea for me was Danny Brown’s remix of “Step” by Vampire Weekend. I added the ‘w’ to make it my own thing.

What singers/musicians influenced you the most?

I’m most influenced by artists that do their own producing, mixing even, and create a whole sonic universe for themselves to exist in without paying much head to anything else going on. Especially ones that focus on albums/projects. I love that DIY ethos and determination. Choker is my ultimate hero for that, also Kweku Collins’ album was a big one for me when I was getting started with production, it really inspired me that they made such ambitious albums, with these big narrative experimental concepts in their bedrooms. I really like artists with unconventional tones that make “mistakes” on purpose when it benefits the song, like Deem Spencer and Grimes.

I’m also inspired by artists/producers who do their own thing, and then go and produce and collaborate on unexpected projects with other artists- I’m thinking of Bon Iver, Sampha, Partynextdoor, Dev Hynes. That’s definitely the sort of space I want to occupy.

Lately, I’m going back to a lot of older stuff I missed when I was younger, like The Kinks, The Smiths, Marvin Gaye, Ben Howard. And getting to explore classics that I hadn’t had the chance to appreciate before like Joni Mitchell, Erykah Badu, The Seeds, Kate Bush.

Let’s talk gear for a second. What kind of guitar do you play? And why?

For producing and performing, I play Fender Jazzmaster. It’s pretty adaptable to whatever I’m doing and has a warm classic tone. I’m big on pedals and experimental effects as well, so I’d say my tone is more sculpted by those. I’ve always played a classical Spanish guitar at home and I go between the two for ideas and writing.

How do you define tone? And has your tone changed over time?

Tone for me is the overall sound crafted by the different textures you layer on. I would associate tone with a sense of place rather than a lyrical theme. My tone has definitely evolved over time, but necessarily in a linear way – the tone of my productions tends to be different in the Summertime than in Winter. I think that overall, I’m closest to a warm syrupy sound that’s combining the futuristic and the classic, that’s what I’m working towards.

Hip-hop is by far the most popular music genre in the world. How do you keep your sound fresh and avoid coming across as derivative?

There are so many different strands of hip-hop being explored because of the nature of the genre. It’s built on combining elements that wouldn’t be associated with each other and borrowing from different genres. It makes a lot of sense to me that it would be the biggest genre. I think hip-hop artists can be boxed in unfairly- if there’s a song that has equal elements of pop or rock as it does hip hop, it’s automatically classed as hip-hop as a way to dismiss the creativity a little bit. So to see that being reclaimed now as being a big sphere that incorporates so many sounds is cool.

In terms of keeping things fresh, I think the more stages of the process that you are doing yourself, the more unique the finished sound is going to end up because it’s a series of personal decisions.

What is your songwriting process?  Do the rhymes come first, or the music?

At the moment, I’m usually trying to find an interesting unique sound to get ideas bouncing off of first, then I’ll start to build texture, structure, themes and collaboration around that. It really depends on the song, though, each one is slightly different.

What inspired your single “Goldfish?”

I wanted to get another song going with Awesimon. I had really enjoyed making “Six Drinks” last year and he always has great energy. I sent him over a few ideas – one being the slower second half of “Goldfish.” He sent me back some vocals and I built the rest of the song around that. This year I’ve been really focused on textures and a more cinematic narrative vibe to songs, with more dramatic switch-ups, and mixing things to compliment the themes of the production into a cohesive texture.

You collaborate frequently. How do you decide who to work with?

I’m always listening out for something new that I haven’t heard before, whether someone has 1 song and 2 followers or has been active for years. If it intrigues me, I want to see how our sounds could meld. Ireland’s small as well, so you just end up meeting other people who make music, and those connections happen naturally. Having had the opportunity to collaborate with so many different types of artists, I can start an idea on my own and I know straight away who to send it to and what direction we could take it, so when there’s a mutual trust and appreciation for each other’s musicality that’s what I focus my energy on.

It’s the best way for me to express myself and one of those few things that you can see the point in doing it, for the sake of doing it.

What’s next for you musically?

I’m focusing on longer projects at the moment and making things that exist in their own sonic world, both alone and producing projects with other artists. I have some cool things on the way with Chahyld, Selu, Omo Aston, and Aaron Everything, and a few more that I’m really excited about going into the new year. I’m enjoying incorporating those more cinematic textures into my production that’s still fresh and holds a vibrant energy. I’m not rushing anything though, I think it’s a good time to pace myself and take time for reflection, learning, and experimenting, rather than chasing momentum.

Any people you want to thank or give a shout out?

The artists I mentioned above are keeping me inspired, at the moment! And all of the other amazing people that I’ve had the opportunity to collaborate with earlier this year as well.

‘The Layered Effect’ by US rapper/producer Andy Cooper offers a punchy reminder of the creative fun to be had in digging for breaks, stringing up loops and layering up stratas of sound. Brimming full of […]