Fact: Angie Brown is one of the big voices that make up our lives' fabric and soundtrack. Once again, she is is flying in the top of the UK Club Chart. Neal McClelland caught up with Angie to talk about the fantastic Club track 'Higher' with Beyond Therapy and X EchoFly and her extraordinary career. 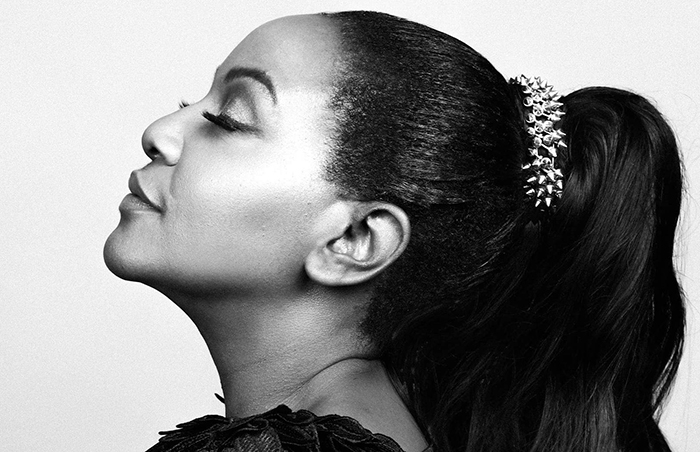 Tell me about Beyond Therapy, Echo Fly & Angie Brown – 'Higher' track. Its a proper Rave Anthem with breaks, loops and pianos. Its perfect a proper 'High Energy Slammer'!

AB: It's got the pedigree, DJ Dougal from the 'Tech Scene' and the legendary early 90's engineer Ollie Jacobs, famous for working with Madonna, Sasha, D Ream and Peter Andre. Ollie even engineered the iconic Leftfield. It's signed to the historic London record label Champion Records which is in its celebratory 35 Year.

I instantly loved it within the first few beats and have supported it a lot on my radio shows.

AB: It has all the elements, hasn't it? For me, it's just singing Neal. I've sung all genres. I just like music, I've sung everything apart from 'Trad Jazz' & some Folk songs. I've worked with Courtney Pine, Lisa Stansfield & backed up a lot of people. I've even backed up Heaven 17 in Arena Tours supporting Erasure.

Let's talk about that track...' I'm Gonna Get You.' It's stood the test of time. It still works, I've never heard a remix or rework that has touched the Bizzare Inc. original version featuring you from 1992. How did that come about?

AB: Somebody remixed before, but it was too nice for mainstream clubbers to take it seriously, 'heavyweight clubbers' want more BASS! They don't want it 'Toppy' They want it heavy!

Its such a pop track too with sing-along 'Feel good 1992 Rave vibes'!

AB: It crossed over beautifully. Bizzare Inc wanted a vocalist that could cross it over. You know it was initially a Jocelyn Brown track bootleg? That's how I first heard it. Somebody had heard me singing Aretha's 'Respect' in a club in London, they asked me could I sing like Jocelyn Brown, as a young singer, of course, I immediately said 'Yeaaah!'

When I got into the studio, I was bricking it. They were expecting a big American voice; thankfully, I had drama school training, I visualised fried chicken in a southern USA tone and sung the words....'Why Waste Your Time'.

I guess the rest is Club Culture history?

It's Aretha; It's Jocelyn. It's Kathy Brown its all the big voices. Where do you get your influences?

AB: I was born in the '60s, I was a kid in the 70s, I listened to what every other child was listening to, Michael Jackson, Dusty Springfield, Aretha Franklin, Stevie Wonder, even The Beatles, Motown, Temptations and David Bowie. My love of music and genres music influence is vast. Since I knew I was a singer, I knew I was a 'Soul Singer.'

My overall sound was going to be that soulful sound, that's the market I aimed for. But I quickly learned that regarding marketing, the Americans really perfected 'Soul Music'. So much better than us Brits.

There were no real UK 'Soul Singers' that made it big time. Apart from Mark Morrisson & Beverly Knight. The path to soul music will always go back to America, like Whitney, Luther, Alexander and Aretha Franklin, etc. When House Music came along, I found my little pocket to fit in quite nicely.

I did copy that American style because I've been trained in singing lessons I learned as a child to sing from the diaphragm. So I know how to change my sound. If I could change my little Soprano into a big American sound, I could sell my voice back to America, just like The Rolling Stones! The love I get in America is amazing.

They couldn't get over I was from London because I could sound like them. They could barely get their head around the fact that there were black people outside America apart from Africa. 'I'm Gonna Get You' has been in the Billboard Hot 100 twice, I still get a nice little cheque from America for airplay, it's kept my name out there.

Surely it's due a remix?

AB: I can still hit the notes, like fine wine, I've looked after my voice. Look after the car, and it keeps going (Laughs) We are going to put it out soon as a 30th Anniversary celebration. There's no difference in the new one and the old one, we are deliberately keeping it tight!

What have been the highlights of your career?

AB: The biggest one is 'I'm Gonna Get You Baby', doing the track and appearing on Top Of The Pops! When we were kids, it was the ultimate program to be on. That euphoria, I've never had again until my children were born. Hearing it on the radio, or pumping out of someone's car or walking into Woolworths and seeing the 7' on the shelf.

When my Mum & Aunts heard it on the radio, My Mum would say 'Yes that's my darling'. Everyone was so proud. Thousands of producers, Thousands of DJs, when you get into the charts its a massive accolade! Number 2 in the UK Chart, only stopped by Tasmin Archer 'Sleeping Satellite.'

I also loved going to America, staying in beautiful hotels, meeting amazing people, being the front person in Romona 55, having an East-West record label contract, and being very successful. I loved learning my craft, learning the stage and what works for my audience.

Covid is affecting us all. How are you with it?

AB: I'm sad, I don't want to go on about it. I was speaking to a psychologist, she said what we have is like a volcano as performers, it's building up inside us and has nowhere to escape.

I've watched your live streams they are excellent!

AB: I went to DJ School recently, I wast thinking I DJ at all these festivals, all these incredible DJs are there banging out the tunes, Dave Pearce, Sonique and I needed something to bring myself on stage.

So I joined the London Sound Academy did a beginner & intermediate course and taught myself to DJ!. I'm now guesting on radio, Unity in London, London World Radio all on vinyl and ready to go for the festivals. I miss performing badly. It's been difficult; it hurts.

Beyond Therapy X EchoFly & Angie Brown's Higher is out now on Champion Records – buy it here.