An Evening with Shaun Ryder begins on Saturday night at the Sugar Club in Dublin. The evening features an in-depth interview with the man himself, about his years in Happy Mondays & Black Grape, the Manchester music scene, and of course the notorious hell-raising antics that make Shaun such a fascinating and beloved figure in British culture.

The audience will have the chance to ask Shaun questions too, and there will be live music from some special guests. If you’re a fan of the Happy Mondays & Black Grape, and the Manchester indie music scene in general, this is an event you DO NOT want to miss. Mark Millar caught up with Shaun to talk about the shows and what else he has COMING UP in 2020.

Hey, Shaun, you begin your Q&A tour An Evening with Shaun Ryder on Saturday night at the Sugar Club in Dublin. What can people expect from the show?

Fucking hell I don't know. A guy interviews me, and I don't know who that is, because I like to keep it fresh with the dude who's interviewing me, so it doesn't get stale. I don't turn up with a list of questions and give it to whoever is talking, like some people do, which surprised me. The interviewer can go where he wants and then when we have chatted for an hour or so, we throw it out to the audience, and the audience can go wherever they want with it.

Are there any topics that are off-limits or can people ask you anything?

No nothing, but I suppose it's better to stay away from religion when I'm in Glasgow, Northern Ireland or Dublin. (Laughs) I don't mind - they can ask me what they want.

Do you get nervous being on stage by yourself without any of your bandmates?

When I first started, I would get to somewhere, and they would say, “Where are your questions? And I’d say “what?” I won't mention names, but the same agent that I had who was in other bands would turn up with a list of questions that the interviewer had to stick to, and I couldn't do that, I really couldn’t - it would be fucking boring, it would be fucking ridiculous and annoying, and not real.

Happy Mondays have been touring quite frequently over the last few years have you and have just finished a UK tour. What is next for the band?

We will be giving the Happy Mondays a rest for about 18 months. I'm going to be doing a bit more Black Grape and some other stuff. I'm glad we went out with all the stars and stripes and flags and whistles.

It will be great to hear a brand new Happy Mondays album after the hiatus.

I'll never say never, because it probably will happen one day, but not at the moment. When we do Black Grape, it's just Kermit and me, and it can be sorted like that. Kermit and me could do a Black Grape album tomorrow, but with the Mondays, there is 6 of us - they have all got a say in something, so it's a lot harder to sort out and organise than doing a Black Grape album.

When will you be going into the studio to record the new Black Grape album?

Soon I should think - I'm just waiting on the word from Alan McGee to tell me when we're doing it. We are doing it - we have got the go-ahead, so that's happening. As I said, it's so easy to do because there is only Kermit and me.

Producer Danny Saber was an integral part of the first Black Grape album. ‘It's Great When You're Straight...Yeah.’ Do you think you will ever work with Danny again?

Yeah, I'd never say no, it's just not happened yet. And I can’t see any reason why I wouldn't work with him. I like Danny. He is great.

Do you approach songwriting with Black Grape differently than you do with Happy Mondays?

No, not really, I'm on my own aren't I, with the Mondays, so that's a big difference. Basically, with Black Grape I get in wherever we are and turn the telly on, and I've got a head full of ideas. And then me and Kermit throw ideas and bounce off each other, just like we did back in the day.

What's a typical day like in the life of Shaun Ryder when you aren't touring - what do you get up to?

When I'm at home, I do as little as possible - we've still got kids who are at school, so when I am at home, that's all it is. I have other kids who are now adults - when they were kids I was never there, I was out building a career. I wasn't even in the same country. I never saw them. I wasn't there when they were growing up. So with my two young girls, we do everything that you could think of. I do the school run, go to plays and all sorts of stuff.

You recently lost all your hair through a form of Alopecia. How are you coming to terms with hair loss? Because back In the day everyone was running around with a Shaun Ryder hairstyle.

(Laughs) Alopecia Totalis is what I have got. Here's the thing right, if I could get a beard back I wouldn't be mithered. All I am bothering about now is getting my goatee beard back, but it's not going to happen. And I'm not going to be one of those guys who starts having hair transplants and all that sort of stuff. It's funny because I have got loads of people contacting me on email, asking me if I want them to tattoo my head or my eyebrows.

They can tattoo it now, and make it look real, but I just had to decline because I don't think I could live with that. I know if it happened to Peter Andre, he would still be hiding under his bed and not going to work. I've always had skinheads anyway, I've had two hairstyles in my life - it's either long or a skinhead. So it's just my little beard I miss.

I couldn't imagine you wearing a wig either.

The last time we spoke you told me you had just finished your second solo album with Sonny Levine - will it ever be released?

Yeah, it will do one day. It's up to Alan McGee to let me know when it's going to get a release - it's ten years old that album. I'm thinking of just putting it on the Internet and letting everyone have it.

Last year you published a book of all your lyrics called Wrote for luck. Tony Wilson once compared your words to the works of WB Yeats - how did that feel?

Yeah, that's right - I had no idea who fucking Yeats was. And I still haven't looked into him. (Laughs) I've never really done poets - the only poet I know is John Cooper Clarke. Tony did come out with some arty stuff - it's better than saying he is a pile of shit and he's a crack head.

Nowadays you are as much of a TV personality as you are a musician, appearing in programmes such as Gogglebox. Do you enjoy both equally?

Yeah, because that is the way now, that you get new fans to the band. Me and Bez have tripped into the TV stuff. Every time we have done a show, it has brought new fans to the group. Our age range from the Mondays and Black Grape goes from aged 8 to 80. We have got a whole bunch of new fans who have discovered us through the TV stuff.

Nowadays when you go on one of these TV shows, straight away people pick up their iPad or their phone and go, “Who the fuck is he? Oh, right it's Shaun Ryder and Bez.” Then straight away, a big list comes up with all the information about what we have done, and all our albums are there. Then they go through the records and listen to them and go, “Oh yeah, I like that.” And then next thing they are at the shows. Because there is no Top of the Pops anymore, there is only Jools Holland and MTV, it is the way for people to get to know you now. And you get a whole new lease of life out of it. I'm sure when Tom Jones started doing the Voice, some kids didn't have a clue who he was, then they looked him up, and away you go.

A Film based on your autobiography ‘Twisting My Melon’ was announced with Jack O'Connell playing yourself And Maxine Peake playing your mother. When is the movie going into production?

That starts filming in April - it was supposed to begin filming on January 13th, but because it goes dark around 4 o'clock, it's been changed.

Do you hope it will be a better portrayal of you than in the film 24 Hour Party People?

The thing is, it's a different story - ‘24 Hour Party People’ was like caricatures. It was almost like a ‘Carry on Hacienda’ film. That was a caricature of me in that film. I never spoke to the director Michael Winterbottom or anything - I never met anyone. My character in that was like the kid from the New Musical Express, or what they got out of the Melody Maker, you know?

You are a big believer in aliens and UFOs - do you think the government will tell us they exist in this new decade?

They will do, but I don't know when. It's getting closer and closer. The military in the states has released stuff, and now people in the government who want to talk about it don't want to get run over or end up falling from a high building. It’s certainly coming out more now, and it will happen.

Do you think UFO's are living among us?

Oh yeah, absolutely! There is no doubt about it -they have been here for years. They have never been away.

An Evening with Shaun Ryder at The Sugar Club in Dublin. Get Tickets: www.thesugarclub.com 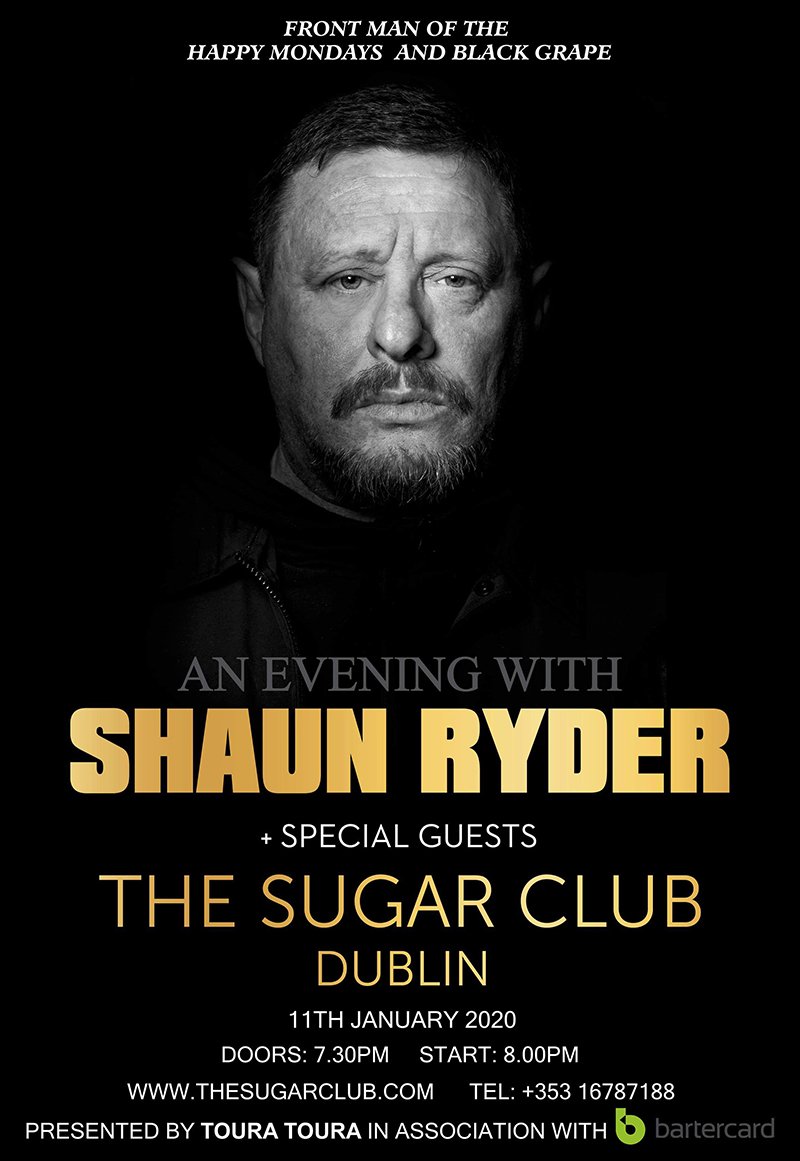 It’s pretty hard to believe it’s been 21 years since Black Grape released their debut album It’s Great When You’re Straight….Yeah! Formed by Shaun Ryder and Bez on the back of their success in the...

Love Ghost is an L.A. based rock band. An industry insider recently noted “their effortless melding of styles invokes the magic that was once commonplace in rock music. From Progressive to Industrial to the Classics...

Dermot Kennedy has announced his biggest outdoor headline show in the UK as part of the renowned concert series Sounds Of The City at Castlefield Bowl, Manchester for Tuesday 21st September 2021. Dermot is a...