Picture this: A cool crowd chilling at Skinny’s, a NoHo bar owned by a Brit. It’s a warm fall night, and the opening band just finished. The small stage is starting to fill up with a handful of blokes setting up the gear and from the moment the first note is played, the crowd flees the bar and rushes the stage. Booties don’t stop shaking until the last note, and even then, the infectious smooth and funky sounds echo into the next day. The Winachi Tribe are a phenomenon: an electrofunk soul-sonic collective. A band as unique as its name, danceable, booty shakeable, soulful and deep: dance music with positive messaging, both sexy and sweet. There’s no question, they have “it,” that indefinable quality that draws you to an artist and encourages you to spend your last buck on merch.

Since forming in 2015, the British band has been attracting buzz, opening for Zak Starkey in London’s West End and dressing up singles with videos starring the likes of Sons of Anarchy/Braveheart actor Tommy Flanagan and Keith Allen (the father of Lilly Allen). Such legendary producers as Howie B, Danny Saber and John X have worked with the band, with John X currently producing the band’s debut album. The Winachi Tribe embody the spirit of D.I.Y., doing everything themselves each step of the way so it’s no surprise that they’ve become media darlings. From the BBC to the LA Times, to KCRW to Billboard China, the Winachi Tribe’s story and funky music fill the airwaves.

Although from Warrington, U.K., a town between Manchester and Liverpool, Los Angeles has become the band’s second home, with memorable performances at such venues as the Teragram Ballroom and a swelling fanbase. When they opened for the Charlatans U.K. in L.A. 2018, the show was sold-out and they gained hundreds of new fans. Among the group’s performance highlights, some of the UK’s biggest music festivals, including Victorious Festival, Tramlines, Shiiine On Weekender, Moovin Festival, Bearded Theory & Sunflowerfest. Belfast. They’ve been booked as official tour support for the Happy Mondays, Soul 2 Soul, Sugar Hill Gang. The Furious Five & The Charlatans, while also headlining three of their own national U.K tours.

Their rise has been nothing short of remarkable. The group that began as North West electro-funk underdogs, commands sold-out venues from East to West and there’s no doubt the combination of its succulent sound and electric performances is an elixir for our times.

The band took the time to sit down poolside on a balmy SoCal night with veteran music writer Heidi Siegmund Cuda to help define its origins and its purpose. 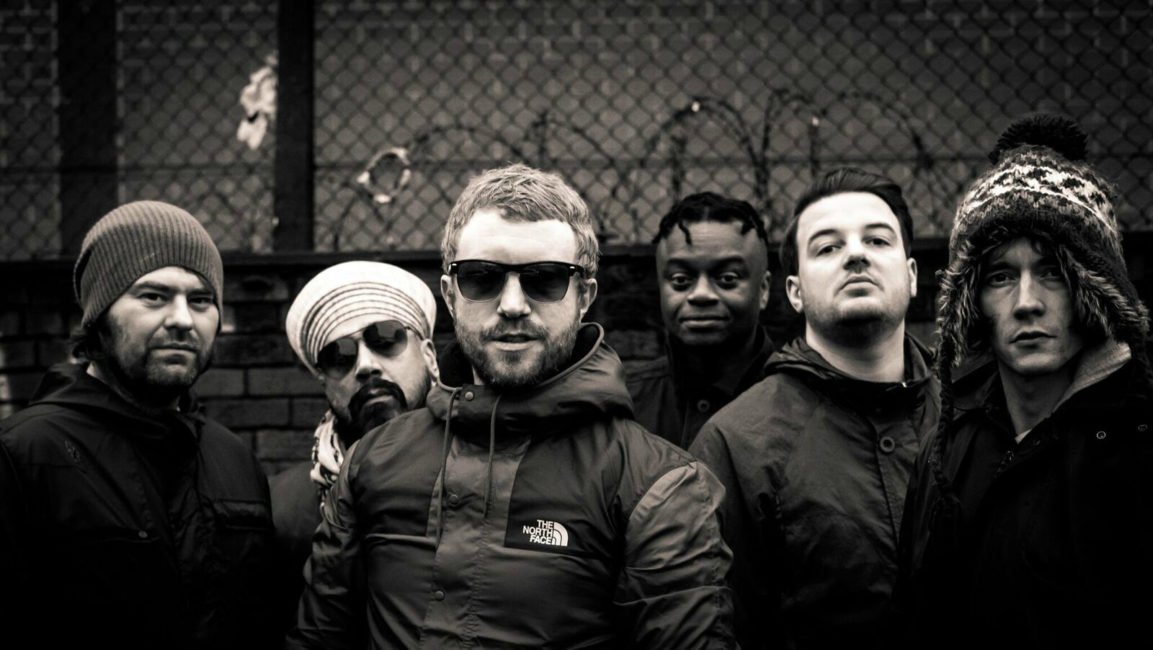 “What’s the essence of your band, the spirit?”

LIAM: “The band has come together over a number of years. It was originally called Chinawhite, after a Melle Mel lyric. Me and Antony Edgerton met each other in our local town and started making music together. Then Sam joined us, and we reached out to Inder and Inder joined, then Richie, Mike. We changed the name because of the association with Chinawhite.

“Right, I think Harry (Bridgen, the band’s manager) might have been part of that right?”

LIAM: “Yeah, Harry said, ‘I can’t do shit for you guys if you’re named Chinawhite so Antony came up with the idea of spelling it backwards.”

HARRY: “What I actually said to them was, ‘I don’t know what the name China White means where you’re from but here in the US it’s a street name for pure Heroin, and Liam says to me, ‘Well I got it from a Grandmaster Flash song, and I told him that should have been your first clue.’”

INDER: “I seem to recall back in the day when we had these conversations in the early days when we were still shaping the band, I had a conversation with Ian (Brown), and he said, ‘That’s not a good look.’”

LIAM: “It was chosen from innocence because we were influenced by Grandmaster Flash & The Furious Five. You know the song, White Lines, the full 12-inch version. But we experienced a rebirth. We went on stage at the basement club in the West End of London called the Phoenix to open for Zak Starkey, Ringo Starr’s son, as Chinawhite, but came off the stage as the Winachi Tribe. Somehow, the name Winachi Tribe fits us perfectly because as we travel the world, we are a tribe, and our fans have become a tribe. Music brings people together and dance music really brings people together.”

“Talk to me about what you want people to feel when you’re performing.”

LIAM: “The vibe of the band is we’re just trying to portray a positive message, you know, you hear it in the lyrics of the songs social commentary they can be quite dark at times but in each song, there’s a moment of light.”

“To be so funky, such great dance music, but to throw in that positive messaging is pretty brilliant. It’s not just, ‘love to love you, baby.’”

LIAM: “I mean Transition, the single that’s out at the moment, I’ve had folks back home say to me that help them through their depression.”

INDER: “I totally agree, it’s thought-provoking, you know, People watch the video and realize it ain’t about having the right answer it’s actually about being able to ask the question and look deeper into the answer because obviously no one’s got the right answer.”

LIAM: “Yeah, we’re not preaching. We’re just telling our version. It’s a message without a message if that makes sense.”

MIKE: “Yeah, but we are on a spiritual mission.”

“To be a musician in 2018, you gotta be a crazy muthaf**ka, to begin with. So why are you guys so passionate about it? Why do you go through the pain and suffering of being in a band (lol)?”

SAM: “Because we’ve gone too far to come back.”

MIKE: “You’ve just got to give yourself up to music and put faith in it.”

SAM: “It’s the only thing that keeps me sane.”

MIKE: “I was in semi-retirement before they drew me back in.”

“So what is about you as a band collectively that loves soul and funk and dance music and why did you gravitate two words that?”

SAM: “For me, it was like I was brought up with Northern Soul so that was a big influence.”

LIAM: “You’re only as good as your record collection. It has never been a conscious decision to make dance music. It just happened.”

“Nothing about you guys is prefab.”

LIAM: “We know what we’re doing, but there’s also an innocence and a purity about it as well. The minute that goes then it’s fucked. We go into the studio as very accomplished musicians, but we’re not trying to make a certain type of thing. The Winachi Tribe doesn’t sound like anybody, and no one else sounds like us. I’m sure a lot of bands feel that about themselves, but I know with us it’s a fact.”

“In the words of Shorty the Pimp, you get in where you fit in. Okay, now we need to hear from the bass player because the bass is very f**kin important.”

RICHIE: “Inder brought me in. They needed a good bassline, a bit of slap and some funk. My background is in gospel and blues, but my record collection includes things like Earth, Wind & Fire, old-school soul stuff, Chic, Sister Sledge. I kinda took that history and rolled it into one. I like poppin all those flavours into Winachi, you know what I mean?”

INDER: “I think a lot of people can say the word funk but this man has actually lived it.”

LIAM: “Richie is as solid as a rock.”

SAM: “We all elevate each other’s game.”

LIAM: “I only ended up singing because no one else could do it.”

“You’ve got a lovely voice.”

MIKE: “The voice of an angel, a whiskey angel.”

ANTONY (who’s been in the kitchen making fried chicken for everyone the entire time): “I just wanted to see how far we could get. I was on guitars originally, but we couldn’t get a keyboard player so I went on to keyboards. We started all this in my shed.”

LIAM: “Our original goal was to get out of the shed and on a plane.”

ANTONY: “And we got out of the shed, and have seen the world.”

INDER: “It’s amazing where music can take you. We are a Groove Machine up there, and people have no alternative but to submit themselves to our groove.”

LIAM: “We love the f**kin’ bones of each other, but it is a very complex bunch of characters but that’s what makes it the Winachi tribe. We could explode or implode at any time and that’s the beauty of this group. That’s what keeps it electrifying. You can’t be a wimp in this band, you’ve got to be able to hold your own and hold it down.”

Heidi Siegmund Cuda is an Emmy award-winning investigative producer, broadcast journalist, author, columnist, screenwriter and documentary filmmaker. After 15 years as an investigative producer for Fox 11 News, she resigned in 2013 to pursue TV, film and book development. She and her producing partner Susan von Seggern (the creator of “My Cat from Hell”) had their first development deal with Discovery Studios three weeks after Cuda resigned from Fox.

In addition to her television work, she spent 15 years as the Los Angeles Times nightlife columnist and urban music critic. She authored seminal rap and punk books, including “Sublime’s Brad Nowell: Crazy Fool (Portrait of a Punk)”; “The Ice Opinion,” with Ice T; “Got Your Back,” with the bodyguard of Tupac Shakur; and “Warped Book: Tales of Freedom and Psychotic Ambition,” about the Vans Warped Tour. In 2014, she formed a partnership with Over the Edge Books publisher Paul Stewart to create the punk imprint, “Straight Ahead.” Currently, Cuda and Von Seggern are developing reality shows and Cuda’s film script, “Dead Air,” co-authored by playwright Alex Zola, is being developed into a feature film. She is also part of the Al Jazeera America team producing “TechKnow,” a science show that’s trying to save the world one story at a time.

We are pleased to exclusively reveal the latest track from The Winachi Tribe – ‘The Seed Will Grow – Danny Saber Remix’, ahead of their forthcoming release ‘Plant The Seed’, released on September 25th on A1M records. Legendary […]

Art of the front man part 2 – ‘Shaun Ryder the anti front man’ Sometime in 1993 I was first told about this dude named ‘Shaun Ryder’, of course I had heard of the ‘Happy Mondays’, but being […]

The Winachi Tribe bring together urban swagger, soul and funk to create unique electro-funk grooves; a sonic soul collective who are unrestrained by boundaries or formulas, either musically or culturally. Today sees the debut release […]