Perth natives Psychedelic Porn Crumpets are playing a headline Belfast show at Voodoo on Wednesday 22nd May 2019. Renowned for their crowd surfing inducing, mosh pit embracing live show as best described by The Music “The bands overpowering energy fractures the boundaries of logic & sound”. The four-piece have also created their own independent record label, What Reality? Records. Not only have the psyche rockers dropped two head rattling LP’s, ‘High Visceral’ Part One and Part Two to rave reviews they have sold out both national tours. Mark Millar caught up with the band to talk about the new album and current tour. 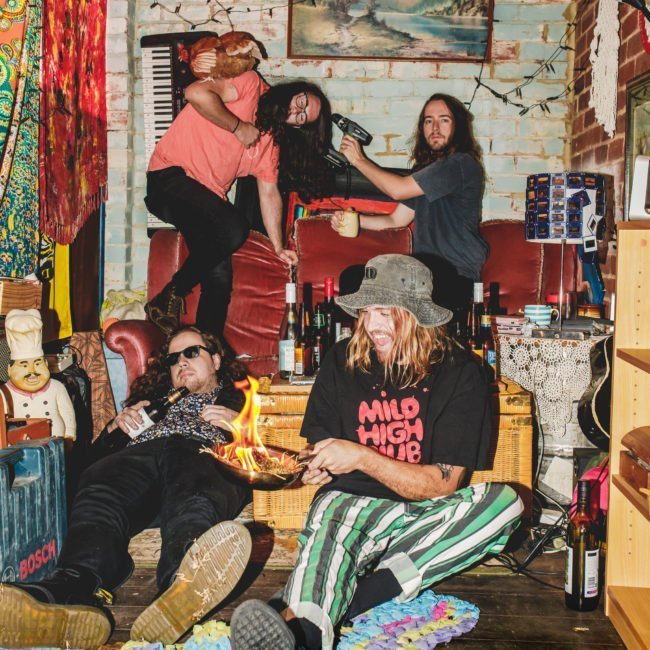 It was originally a solo project that I showed Danny (Drummer), we’ve played in bands together for years so he was the first person I instinctively got on board. Myself and Rish (Guitar) met through jamming ‘round our mutual drug dealers house and Reynolds one day appeared in the barn.

I was watching a lot of Mighty Boosh at the time so Vince Noir was a heavy influence. PPC feels like it gets the brain ticking.

Who are the bands musical influences?

Unknown Mortal Orchestra has been my go-to for a few years now, obviously all the classics like Black Sabbath, Led Zeppelin and The Beatles, then Tame Impala appeared and that changed me, changed Perth too. Pond came out soon after and I was hooked on psych rock.

You are about to release your new album, ‘And Now For The Whatchamacallit.’ Did you go into the recording with any preconceived ideas how it should sound and the kind of songs you wanted to write about?

There’s always a plan from the start but once I get going it seems to change too much to call it a concept, all logic is blown out the window fairly early on. I record the majority of it at home and just trial and error with sounds, after 3-6 months of recording mostly every day you get lost in a spiral of your own creation and tend to scrap all the older stuff in fear that it’s useless. There are patches of similarities in the album where I tried sticking to a ‘circus’ theme, then there was a 1940’s village fete theme, new age Kinks kinda thing. But then because the album went through so many changes and varying concepts the final product is even weirder and more colourful than I could have originally conceived, so there’s no point sticking to a theme else you’re effectively writing with guidelines and stopping a limitless flow of everything.

What is the band’s writing process? Did the songs come easily?

It’s me in my bedroom for long periods of time. Then I’ll get carried away recording and forget the world exists. Some songs we used to jam out and they sounded amazing, but for this album, I just went AWOL in my house for months writing as much as possible.

To be honest, I had that with all of them, there are definitely favourites but I wouldn’t want to release a track if I felt it was just to fill in the gaps. ‘Dezi’s Adventure’ is possibly my favourite track to date, It went through about 14 different variations, I was struggling for over a week having the same parts going through my dreams, chewing my food to it then one night I swapped over some parts and it all made sense and I could sleep again. Now I love it, I’m really happy with the whole album, it was way more challenging to write but that’s why I feel really close to it.

Some days I was ecstatic as I thought I’d figured out how the universe works and other days I was ready to go back to working on a building site. I’d never been so poor in my life either, I spent my last $10 on guitar strings one week, worth it though. I definitely went a little insane throughout the process but without a little brain, wobble art would be boring.

Buzzing for it! Never been to Belfast so it should be a real treat.

How have the shows been going so far?

Amazing thanks, we’ve added a fifth member, Chris. He’s been playing with us in Perth but now he’s a fully loaded Crumpet. We’re sounding more like the band we want to be, it puts a grand old smile on the dial.

Its wind down time after a show what's your go-to listen to unwind or recharge?

Getting to a venue and there’s a fridge full of beer with our name on it. Obviously being able to write and play music is a dream. My hobby is recording and I was doing it before it was a full-time thing, now nothing’s changed but I can afford guitar strings and subway. 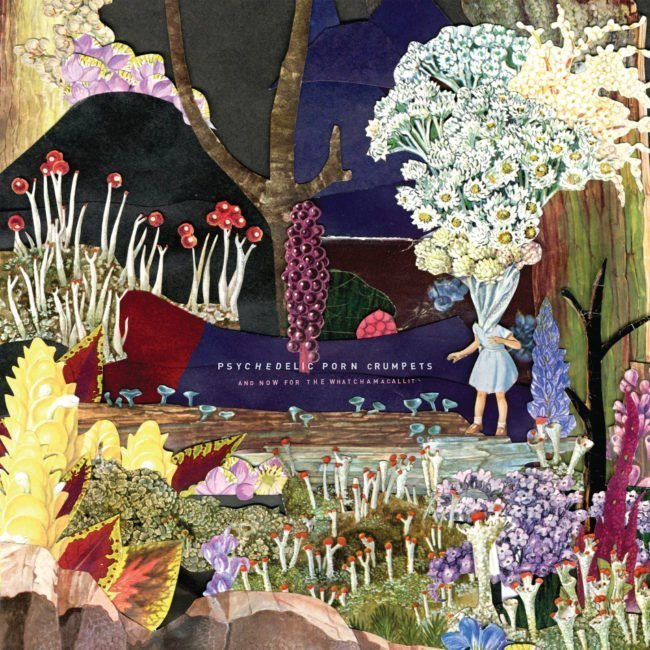 And Now For The Whatchamacallit  Tracklist:

When talking about Avenged Sevenfold impressive statistics always get a mention. These include a string of best-selling albums, among them two consecutive No. 1’s on Billboard’s Top 200 Albums Chart along with Diamond, Platinum and...

Brand New Friend break into 2020 in style with the release of brand new EP: ‘A Cure For Living’ and the announcement of their biggest Belfast headline show to date at Voodoo on Saturday 14th...

Dublin four-piece The Riptide Movement are pleased to announce a headline Belfast show at The Limelight 2 on Friday 25th October 2019. The band are back with the release of their eagerly anticipated new single...