The last 16 months have undoubtedly changed our lives in a generation globally. Surely someone would catalogue it? Cue electronic music and Orbital genius Paul Hartnoll and the lyrical phenomenon Murray Lachlan Young and their amazing 'Virus Diaries' album - out now.

How did 'Virus Diaries' happen & why?

PH: We've known each other from secondary school and from being on the local music 'Bohemian' scene from when we were both 18. We've always been musically around each other. In the 90's we knew each other when we had our music landscapes.  Somewhere out there, we have a four-track of us working together. We've always talked about working together properly......Then the pandemic hit.

I had left social media for a time as I'm the biggest sufferer of FOMO, so when the pandemic hit, I snuck back on Facebook. We got in touch and reconnected. I think Murray sent me a poem, and then it all happened quickly.

I told Murray that we should do 'a diary' of this crazy event, and Murray said, 'I'm doing a weekly poem for BBC 6 Music charting what's going on, why don't you score it'?

It was that simple, and it was just like yea ok!  You know when you see children deciding to play something it was like that. Murray would send me a poem on a Tuesday or Wednesday, I would work on the music on a Wednesday or Thursday and then I would hear it on BBC 6 Music on Friday.

It is a very simplistic view of something that for us all has been very difficult to process, it's a super cool way to pick up on where the world was.

MLY: I think the thing that became apparent very quickly was the context failure in society. What Paul and I agreed on was that we wanted to provide some positive context to what was happening, and to allow people to digest what it was. It was like a service, that we were doing a public service. We were keeping our own minds together, people were losing their minds at that time. Lot's of people were having 'massive freak outs'

The calling for us was to create something that didn't make too much light of peoples feelings. People were feeling what they were feeling. We didn't want to belittle any of that, but equally we wanted to provide some positive context to show people things are still ok.  That was essentially it for me – pick the 'Zeitgeist' each week of what was happening 're-contextualise' it – to say its 'ok'

Absolutely 100 percent, we all did our own things to keep ourselves going. Paul explain how you went about scoring Murray’s work, what was the process?

PH: We started off doing 'non beat' tracks like 'Meditation' & 'Work From Home', 'Jogging & Baking' then Murray asked for a metronome and something 'on the beat'. I sent him a few different BPMs and then he sent back 'I'm Going Shopping', so as I listened to the vocal and in my head i'm mentally building what needs to go around it. 'I'm Going Shopping' just sounded like a Berlin or Detroit hard, acidy Techno track, serious sound and I just went with it.

Where there any production rules?

PH: Go with your first idea! What's this week about Murray? We'd just go with it. We literally had a day to write each track, and fully produced in a day and a half. So the rules were, keep it simple. Go with what you know. Generally I thought, well this is Techno what do we need?

It was the greatest fun to emotionally respond to:1- The pandemic, 2 - Murray's Poem 3 – All my building blocks over '30 something years' and put them into practice with a new composition.

For me it was fresh sounding, lean, simple and robust. It was a very cathartic exercise for me. I was reacting to Murray's poem, producing and hearing Shaun Keaveny laugh on a Friday on BBC 6 Music. Whilst seeing people were reacting on Twitter saying ' I know this, it's just how I feel. It's amazing' I even put my own tribute into the the album for Florian Schneider from Kraftwerk who passed away at that stage by replaying some 'Autobahn' into it. All the Kraftwerk fans said it was a brilliant tribute.

We were literally 'quick fire' reacting on events that were unfolding in-front of us with no idea where it was going.

It's very straight messaging, in your writing was there a specific message you were trying to get across Murray?

MLY: I was getting a lot of conspiracy messaging, like we all were. I had to lose that completely and had to respond what really was about at that time, being in the flow rather than taking political stances. There are a few lines including 'I've stood along the dotted line and applauded every Thursday night.

The thing was for me was not that we needed help, more that we're not children. We are capable of making our own decisions on our own.  We tried to respond to reality rather than propaganda, and the problem was, the reality was propaganda, writing wise it was poems through to spoken songs.

PH: You really were helping people! For me with the music, I put in comedy, I was having fun sampling my door being shut, door knocking, slamming doors at the end of my tracks.  Stuff that I might not get to do in my normal day job. But for this it was funny, it was a return to the days in the 80's when you first got your hands on a sampler and enjoying what the Art Of Noise brought to the table back then.

There was no rule book for lockdown 1 – You literally have catalogued it!?

PH: This is going to be a slow burn album. In 20 years it will be really interesting, the government won't be talking about it, but people will remember it.

MLY: It's like instantly frozen peas, straight off the bush and into the freezer.  These are time capsules created responded moment by moment.

An audio snapshot of a 'National Lockdown'.

PH: Nobody is going to be talking about the distractions of work, maybe more about the horrors of 'home schooling'  I mean who's going to remember everyone took up 'jogging & baking' (He laughs) That did happen! I remember that very clearly.

Looking back, did you miss anything?

MLY: There was a track that we didn't put in about '2 Metres Plus'. I think everything that needed to be said was said.

We got into a 'Zen flow state' for this where universal consciousness is speaking through you rather than you making decisions. Thats the idea of going with your first idea, you are responding to the truth rather than your ego.

Sum up 'Virus Diaries' in one sentence please.

MLY: An electro, cabaret pop, Zeitgeist journey into the trauma of lockdown 1. ….and that for me says it perfectly.  Let's hope we don't have to go there ever again in our life. 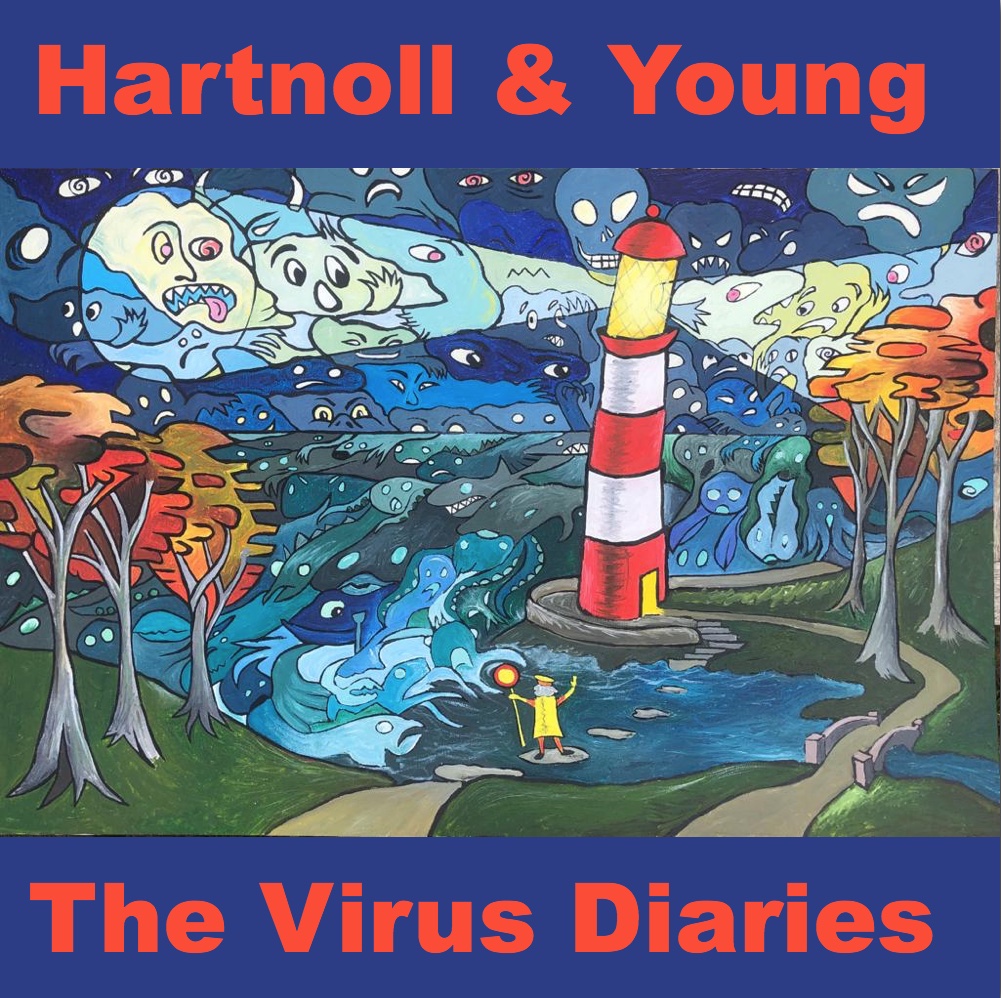