Following the recent release of their new single ‘English Weather’, FEET will embark on their first UK and Irish headline line tour later this month, taking their hugely entertaining live show on the road for 12 dates that kick off in Portsmouth on 27th February, finishing in Dublin on 15th March. The band are currently in the studio for the final weeks of recording for their debut album, joined by producer Cam Blackwood (Jamie T, London Grammar, Billie Marten. George Ezra).

The first fruit of those sessions – ‘English Weather’ – was released last month to great acclaim.  Mark Millar caught up with FEET frontman George (Jeep) Haverson to find out more about this exciting new British band. 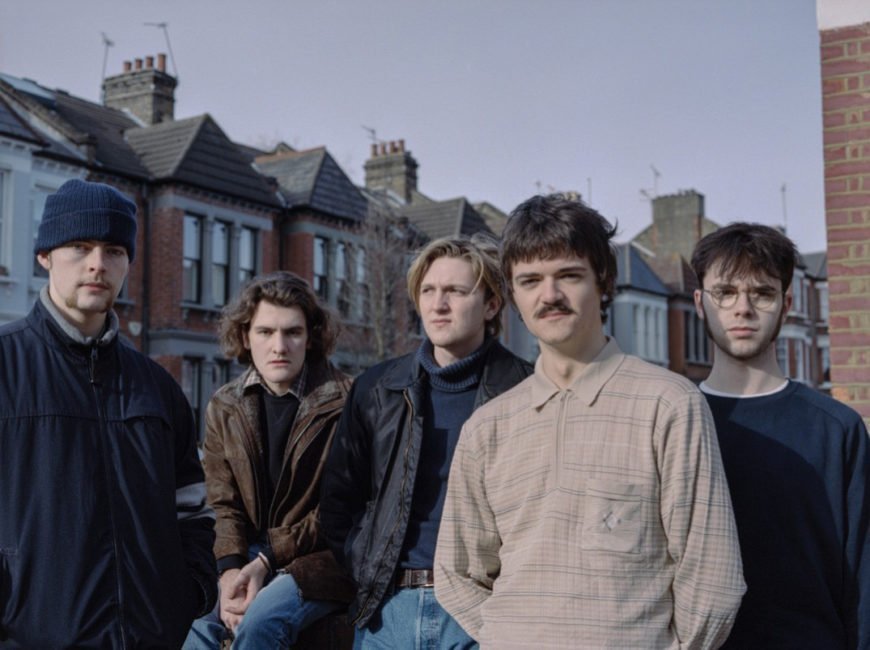 Jeep: We formed about two years ago. We all met at Coventry University where I established a music society with a couple of other friends, and through that, I fell into contact with the other guys. We had two older members that are no longer in the band and have since been replaced by one of our good Uni friends, Callum, who plays the guitar. He joined about a year ago. Our most recent addition is Ben. He used to be in a band called ‘The Dead Pretties,’ and he’s on drums. So that’s where we are at now in the present.

Jeep: (Laughs) Where did that ridiculous name come from? I believe our original guitar player (who was from Luxembourg) was suggesting names one day. He suggested ‘The Talking Heads’ – which was a bit ridiculous. He wanted to have a name with one word, and the last thing we could be called was Feet because it was a stupid name. So we decided to settle with that just to wind him up.

What are the band’s musical influences?

Jeep: I was listening to a lot of Parquet Courts Light up Gold album in the first year of university. Harry and I have very similar music tastes; we like more Garage type stuff and The Beatles. Oli is a big fan of Radiohead. We did a lot of sessions where he listened to In Rainbows over and over again. Callum is into more 60s stuff such as The Beach Boys and The Zombies. Our influences are a mixed bag.

Your first singles ‘Petty Thieving’ and ‘Backseat Driver’ got the band a lot of attention very quickly. How did that feel?

Jeep: The video for ‘Petty Thieving’ did quite well when we put it out, and we got a lot of messages from people who potentially wanted to manage us, and a couple of labels started showing a bit of interest – which was a bit mad. A friend who lived with Oli made the video for the song. He did media production for his course, so we did that for free. We released it one day and carried on as usual, and then all of a sudden we were getting quite a bit of attention from it.

The band hit the road for the long, hot summer of 2018, travelling the length and breadth of the UK in a tiny hatchback, for a host of key festival appearances. Any crazy stories you can tell?

Jeep: We stayed at all of our friends’ houses, and whenever we played a show, we would go out for a night on the town with those friends. We had a very interesting night in Liverpool. We ended up at a house party, and there were two scouse lads there who ended up having a boxing match in the living room. There weren’t any lights on. Everyone was using their phone torches, and I can remember there was a lot of broken glass on the floor. It was definitely one of the more lairy nights of the tour. In general, the tour was great because we would wake up in the morning a little hung-over and then move on to the next place. It didn’t feel like it was going to come to a halt any time soon, so it was a bit strange when it did.

Feet have been in the studio putting the finishing touches to your debut album. How is it coming along?

Jeep: It’s going well. We have recorded ten songs, and they are in the process of getting mixed. We still have a bit of time until the album comes out, so there’s nothing to say that we won’t put more songs on it but it’s more or less finished. We hope to release the album sometime in August, but these things can change.

Jeep: It’s a lovely Scottish guy called Cam Blackwood. It’s been great working with him. He’s done an eclectic range of stuff. He did Frank Carter’s latest record, but he’s mainly known for his thing with George Ezra. It’s interesting working with someone like that because he was very understanding of our sound and what we wanted from the record. We have got a lot of different influences, and we take a lot of care in the music. It takes a lot of time to craft the songs, and we had a clear image in mind, and he was behind that. In general, we had a great recording experience.

FEET recently announced their first UK and Irish headline tour, taking your live show on the road for 12 dates at the end of February that kick off in Portsmouth on 27th February, finishing in Dublin March 15th. What can fans expect?

Jeep: We have gained a drummer, and our sound has matured. In a way, we have got a different sound. A lot of the core values are still there. You mentioned ‘Backseat Driver’ earlier which we don’t play anymore. It’s a song that I think we have on to greener pastures from. I guess we are channelling different vibes and, hopefully, there will be some great shows and we are looking forward to playing them.

It’s wind down time after a show. What’s your go-to listen to unwind or recharge?

Jeep: We more or less do a whip round and see how much money we have to spend on the town. Most of the time is spent working out where we are staying. I think Harry bought an Xbox when we played The Great Escape and he was playing FIFA after one of the shows. It’s not quite the Rock ‘n’ Roll stereotype, but I’m sure we can find more than one way to entertain ourselves on tour.

Jeep: Always being with the band means you are around the same people going through the same experiences, so I don’t get much time to reflect. When I had time off after the recording period, and I went home and saw my friends who have full-time jobs, that’s when I realize that I’m fortunate to be able to bum around and play some songs and earn a living from it. I’ll see the fruits of that maybe a little later down the line, but at the moment we are all pretty skint. But the experience in itself is excellent.

Whilst we savour the hottest February ever, FEET share the psychedelic, tripped out the video for their aptly named, latest single ‘English Weather’. Directed by Josh Homer, it was filmed at guitarist Callum’s Nan & […]

FEET have today shared new single Outer Rim, taken from their debut album What’s Inside Is More Than Just Ham which is due for release on 4th October through the band’s very own Clapped Records. […]