LE GALAXIE doesn’t come from the stars but to experience them is utterly stellar. They established themselves as Ireland’s #1 live dance act with their brand of thundering electro, bursting to life with shimmering cyber-synths, pounding techno rhythms and guitar wizardry. The debut album, 2012's LASERDISC NIGHTS II, was voted Number One Irish Album of the Year by Entertainment.ie. The band's third album PLEASURE, produced by monstrously talented Swedish pop mind BLENDE, is Le Galaxie's dream of a truly great studio dance record made manifest. The titular first single PLEASURE was teased in 2017, followed by "Day Of The Child", the band's first track written with newly added band member MayKay. PLEASURE was released worldwide on April 6, 2018. Mark Millar caught up with David McGloughlin to talk about the new album + live shows. 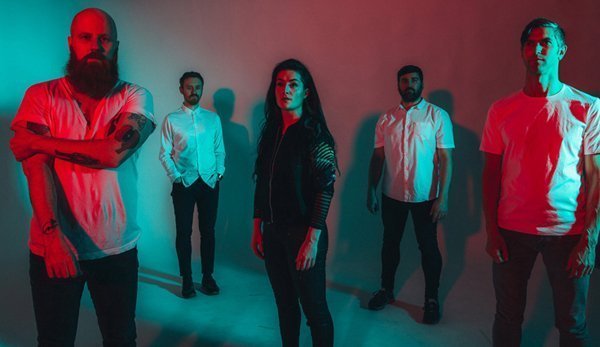 Le Galaxie recently released third album Pleasure. Did you go into the recording with any preconceived ideas how it should sound and the kind of songs you wanted to write about?

D.McG: The worst thing for an artist is to go into something at the very start and keep your set ideas and not allow a certain amount of flexibility and movement with the project as it develops. I knew we wanted to do something different from our previous album. Not that we wanted it to be radically different, but at the same time, I think we kind of wanted this one to be a bit more mellow and heartfelt and I think that comes across in the songs and the arrangements.

There is a bit more warmth and heart and soul to them whereas before the previous album was a bit more bombastic and the songs pushed a lot harder. Not that there aren't bangers on the new album but at the same time we did want to have more heart and soul in it. That said the other main difference how we approached this album was we did know we wanted to get a producer involved for the first time. Previously we pretty much produced and recorded all our stuff ourselves, and then we'd take it to someone for a mix, but this time we wanted to get someone in earlier to see what a producer could bring so, we contacted Blende who had done a remix for us before - his stuff is incredible.

We said; "Let's just bring him over and see what he can do with some tracks." So we initially brought him over for three or four days to see what he could do with the tracks we were working on. His role was very much editing and adding a few more flourishes and touches but very much holding the songs down to the very distilled form of what they were. I think a lot of times with the previous stuff we maybe tended to throw everything and keep every idea because we were so fond of them and Blende helped us cut through some of that grass. So in that respect this album and how we approached it was very different from how we approached making records before.

How did that feel handing over the songs to someone outside of the band for the first time? Were you initially precious in the beginning or was it ok?

D.McG: I think by the time we had invited him over we were approaching it with a very open mind. I think we had been more precious in the past, but we were ready to let somebody in. We wanted him to put his stamp on the songs when he first came to the sessions. There were always times when he would be working on something, and we weren't quite sure the direction that he was taking it. Sometimes it might work out and sometimes it might not but there was some still give and take throughout the whole thing.  It was like a transaction but at the same time, we kept our minds open.

D.McG: I think we all have different tracks and certainly, over the making of an album, you might have songs that you are particularly attached to at the time. One of the great things about the creative process and putting together a full album of songs is you never know what surprises you are going to get around the corner. You turn up at the studio one day, and you leave with something that blows your mind. It does tend to change through the making of the album, but I guess one of the ones for me that I think really came together so amazingly and represented how we were working at the time was the song called L.I.E.

Some of the elements of that song had been around for a while, and we reapproached it in a certain way. The producer got involved and all of a sudden Mike came up with an excellent vocal for it, and we ended up taking some elements and ideas from other previous songs we had worked on that worked really well with this song. It was this beautiful conjunction of all the thought and effort that we were putting into the studio at the time and creative ideas that were springing to mind as well as drawing in stuff that we had in a bank of tunes in the background that we were lifting maybe a lead line or whatever. So for me L.I.E. would be the most satisfying one on the album to bring together.

As well as having a producer for the first time on this album you also gained a new member, Mary Kate Geraghty, aka MayKay, formerly of Fight Like Apes, has joined the band. How has she settled in?

D.McG: Yeah, it has been great we brought her in while the songwriting was still going on. We had established the tracks and the shape and format of them. We had written some vocals that we had her in mind to do and once she came in and started doing those. At the same time she was beginning to play more with us live we thought "This is working so well we need to bring Mary in more." At that stage, we asked her to join the band, and we got her more involved with the songs. She actually co-wrote some of the songs on the album this time whereas before with any of the guest vocalists we had written stuff, and they would work with it and maybe would have added a little bit, but this time we very happily handed over a track to her and said; "Look you can have carte blanche just go and write a vocal for this." We would work with her on it and when we would go to the studio we would still be hashing out vocal ideas and lyrics together but it was definitely the first time we passed stuff over to her which was an absolute pleasure because she's an incredible artist and has such energy on stage it has been such a thrill to work with her. We are out touring the album now at the moment and it is just incredible the lease of life that it has brought us to have this new member of the band.

It's wind down time after a show... how does the band unwind or recharge?

D.McG: After a show, we go back to the dressing room and chill out for a bit and depending on what's going on or the mood we are in the energy might go any direction. Sometimes we are flaked out, but other times you've spent the whole day in the van and done the sound check and our energy comes alive after a show, and we will end up staying up all night. We don't necessarily have a specific ritual we go through. Before a show, we generally like to be quiet and by ourselves because we often would find if we are in a busy environment or a busy dressing room where everyone's partying it makes me feel unbalanced before a show. So now we sit around and chat and have a few drinks then after the show that's usually when the party starts.

Do you think there is a healthy music scene in Ireland now?

D.McG: Yeah, its transformed and even since we've started the differences are incredible regarding what we are doing with live dance music. When we began in Dublin, there wasn't a vast platform for that kind of stuff because every show started at nine at night and would be finished at half eleven. Its great now because there are more platforms for acts to play on and the variety of music has increased. If you go back ten or fifteen years, there was really only singer-songwriters and indie bands or acts like that whereas now there is such a huge scope which is excellent. Also between the North and South of Ireland, there has been an increase in the number of bands travelling over and back, but I think there is still a long way to go on that. I have talked about this before, and I'm still trying to figure out why there seems to be that divide in Ireland regarding the music scene that Belfast almost seems like going to London or Manchester whereas it shouldn't feel like that. It's quicker for us to get to Belfast than it is for us to get to Cork and do a show. I think there is a long way to go in terms of that bit there is a lot of cross-border stuff happening.

D.McG: There are so many, and it's funny because even as a band we will suddenly find ourselves going back and listening to records. We have been together quite sometime now, and we will see ourselves playing an album we were listening to years ago, and suddenly we will have it on rotation again. For me, one of the more recent ones that I've started to listen to again was the Aphex Twin album, Richard D James - it is excellent.

The Strokes became hard to see at just the moment that they became hard to listen to. Their two early 2010s offerings, Angles and Comedown Machine fell a long way short of capturing what had...

Following his SOLD OUT ‘Looking For Trouble Reloaded’ event at The Telegraph Building last November, Australian born DJ/Producer MALL GRAB has announced his biggest Northern Irish appearance to date, with a headline show at SHINE...