Today, IDLES have shared a new animated video for album highlight “Kill Them With Kindness”. The video, which was directed and designed by James Carbutt and animated by Pip Williamson, is taken from the band’s critically-acclaimed UK number one album “Ultra Mono”, which was released in September via Partisan Records.

Speaking about the video, the director says, “The dingy pub setting in the film is based on the Working Men’s Clubs of my hometown (Barnsley). It was nice to imagine IDLES bursting in and spreading a message of love. During our research we discovered that no two Wetherspoons carpets are the same, they are all unique like snowflakes, so yeah making this film was a wild ride.”

Watch “Kill Them With Kindness” – BELOW:

Looking ahead to 2021, IDLES are preparing to make their much-anticipated live return in the UK and Ireland with tour dates across May and June 2021, which will see them play Brixton Academy on four consecutive dates.

Dates are as follows: 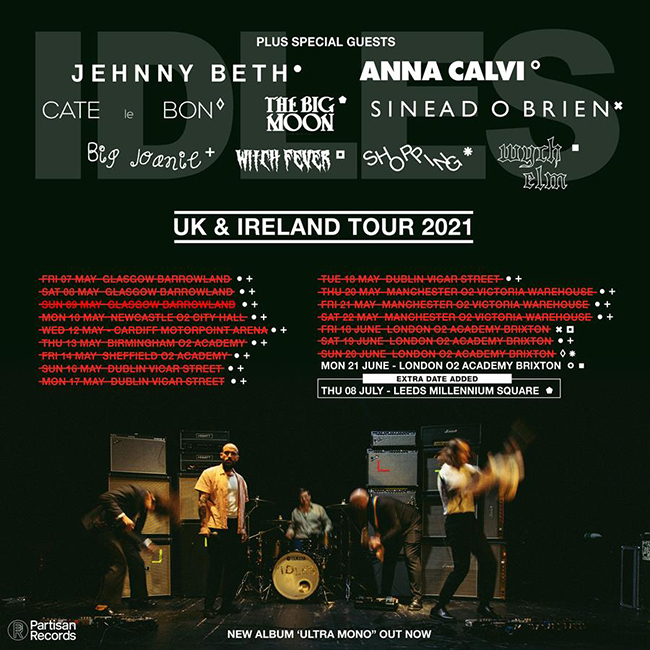 Tickets are on sale now and you can purchase the new album from the band’s official store at idlesband.com

In addition to the above live dates, IDLES will also play an almost entirely sold-out run of intimate out-store shows to take place for record stores across the country in April 2021. The dates are as follows:

Tickets are available at IDLES.LNK.TO/2021-OUTSTORES

Following the release of their acclaimed second LP Joy as an Act of Resistance in 2018, IDLES has gone on to win several awards including two 2019 AIM Awards and dropped a live LP, A […]

Today, IDLES have shared a new live version of ‘Television’, which is taken from their highly-anticipated first-ever live album ‘A Beautiful Thing: IDLES Live at Le Bataclan’. The limited double LP edition will be available […]

After a wrapping up sell-out UK and US tours, IDLES have confirmed a 2019 world tour, headlining their biggest venues yet. The run will include two London headliners at The Electric Ballroom and their first ever run […]