‘Dream Harder’, the acclaimed debut album by HELLO COSMOS impacts on 29 January. As the days count down to its release, the band today unveil one final track: “Renegade Love”.

To celebrate its release on 29th January, Hello Cosmos will be launching the album via Tim’s Twitter Listening Party @ 7 pm that day; following in the recent footsteps of Paul McCartney, Roisin Murphy, Mogwai and many more. Immediately after, the band will premiere a unique animated album visualiser customised with augmented reality tech - tune in at 8 pm via the Hello Cosmos Youtube channel.

As maverick and unpredictable as its title may allude to, the band’s latest single “Renegade Love” is a white-knuckle ride that veers from steely post/punk beginnings and descends into a sprawling outro of hardware-fried electronica. The last track to come together for ‘Dream Harder’, the single hints at an incoming debut littered with left turns and the unexpected. Given its first radio spin by Chris Hawkins at BBC 6Music, “Renegade Love” has also been added to Apple Music's New In Rock and Deezer's 'Hot New Rock' playlists.

With humanity finding itself gripped ever tighter in the vice of technological advancement, “Renegade Love” contemplates the heavy price of freedom we may be paying for its privileges.

As frontman Ben Robinson says of the track:

“The lists in the lyrics come from thinking about what we've lost control of to social media, targeted ads and smartphones over the last few years followed by the idea of true love now being on the margins of our experiences, replaced by Instagram likes, shares and a fleeting feeling of instant gratification. For me, Renegade Love is the actual deep and weird feelings of love that happen in everyday spaces like kitchens, sitting rooms & staff canteens. Those moments that change your life's direction, for the better or worse"

Written well before Covid, the line ‘a hug without an arm’ has taken on an eerie new meaning in this alien world we find ourselves stranded in.

Listen to 'Renegade Love' - BELOW:

Emerging from a late-night session at Braund studios in Brooklyn, “Renegade Love” initially stemmed from an off-the-cuff bass and drum jam between Ben and Errol Kolosine. Taking a flight to meet an old friend and producer Oliver Brown (The Olchemist) in San Francisco the next morning, the pair drove up the coast road to LA and booked into The Blue Room recording studios to add the guitars and vocals. The final vocal and 3 minutes extended section came together back at Greenmount Studios on the final session for their upcoming album: ‘Dream Harder’.

With notions of technology, freewill and escapism at the heart of its agitated diatribe, “Renegade Love” touches a nerve that connects directly with the core themes that course through ‘Dream Harder’. As Ben says of the record:

“Times are tough, horizons are doom and gloom but our reality is driven by our focus and our intentions. That’s why we are releasing Dream Harder now. We need to remain dreamers, we need to think our way through, we need to hold our dreams, not our fears, in our minds.

This album is packed with energy, positivity and raw emotion. It’s a gift from us to you. It’s been created for fun, for reflection and to pass forward the ecstatic moments of life we have shared. It’s music and to us music is about taking the dark moments and making some light.

It’s about sharing an emotion, getting it off your chest and putting it out there for other people to connect with so they can know they are not on their own with their feelings.
It’s about connection & compassion, the core of the human experience. 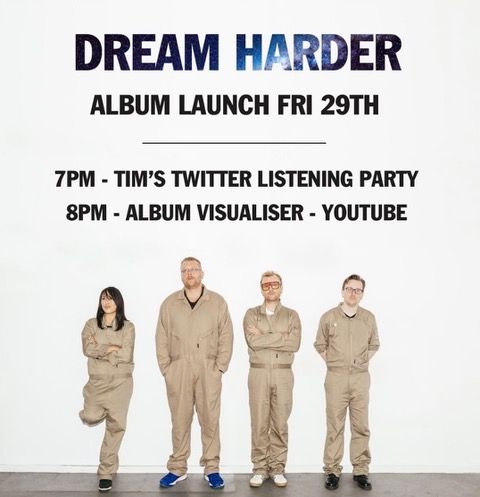 Hoping to shake humanity out of the comatose, fearful and isolated world of 2020, Hello Cosmos’s new album dares to dream of a new and utopian world that awaits tomorrow. Fusing sound and vision, art and activism, multimedia and technology; ‘Dream Harder’ encourages people to use technology and not be used by it, while beaming a resounding message of positivity to counter a period otherwise consumed by inescapable negativity. Harnessing a cataclysm of sounds that owe as much to the snarling post-punk of the Fall as they do to the robotic future-facing electronica of the DFA Records canon, its tracks would feel as at home in a moshpit as they would on a dancefloor; it’s a record that looks to reunite their long-since departed crowds under one virtual roof.

With over 20 collaborators across its 11 songs, ‘Dream Harder’ is confirmed to feature guests including James Smith - lead vocalist in Yard Act, Ila of Tallsaint & Loux fame, Emma Banks of Galaxians, Emily Ingham of Mi Mye, and many more.

The follow-up to their 2020 single “Fuse”, “Dream Harder” also preempts a creative boom of upcoming activity from the band including an album visualiser with animation & augmented reality, a full remix album by an all-star cast of DJ/producer talent (inc. Jagz Kooner, Richard Norris, Jinku and others), visionary new videos courtesy of Vidzinvader and much more.

Following a Corona-blighted year, the latest project from the Manchester-based creative collective will blow away the cobwebs with a bold and resonant bang. A record ultimately about euphoria and escapism, it’s one the world needs right now. ‘Dream Harder’ is out 29 January 2021, via Cosmic Glue.

HELLO COSMOS will release their explosive debut album: ‘Dream Harder’ on 22 January 2021, via Cosmic Glue. The album preempts a creative boom of activity to come from the Manchester-based creative collective, with plans for...