A truly global phenomenon, Gorillaz have achieved success in entirely ground-breaking and unique ways, touring the world from San Diego to Syria, Montevideo to Manchester and winning numerous awards including the coveted Jim Henson Creativity Honor. The band are recognised by The Guinness Book Of World Records as the planet’s Most Successful Virtual Act.

Tickets priced from €68.45 inclusive go on sale at 9 am Friday, April 1st via Ticketmaster.ie 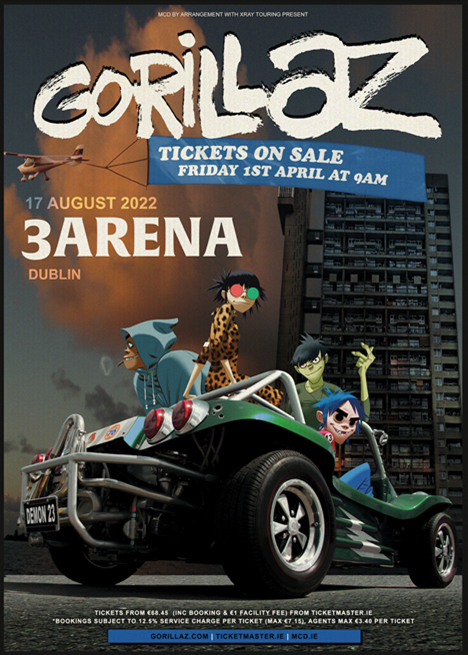 After the massive success of their incredible sold-out shows at 3ARENA Dublin and SSE ARENA Belfast earlier this year, Twenty One Pilots return for their biggest Irish headline yet at SUMMER IN THE CITY, RDS...

Three of the world’s most influential rap groups have announced they will perform a Dublin show together, hosted by legendary producer DJ Premier. The triple-header, billed as part of the “Gods of Rap” tour, will...

BILLIE EILISH announces Belfast & Dublin shows on the first leg of her Happier Than Ever, The World Tour

Following the release of her latest single ‘Your Power,’ and ahead of the July 30 release of her forthcoming album ‘Happier Than Ever,’ Darkroom/Interscope Records artist Billie Eilish has announced the first leg of her...