Ahead of a string of huge festival performances, today Gerry Cinnamon surprises fans with a run of UK and Ireland Arena dates, answering calls from fans who missed out on his sold-out shows to date.

The Glasgow artist has had an incredible journey from recording songs on his phone to releasing his critically acclaimed debut album Erratic Cinematic, which recently rocketed back to the top of the UK/IRE Album Charts; hitting the Top 20 following his latest sold-out UK tour.

His inimitable live shows are infamous for their wild atmosphere and special sing along moments; with his crowd singing every word - to every song – many before they are even released.

On his upcoming tour, Cinnamon says ‘The last stint was top class. Expect nothing less from these gigs. The live shows have become something pretty special. There’s something happening, I don’t know what it is but it's happening, you can feel it, its undeniable. To be honest I've been trying to keep a lid on it but the bonfires burning now and it’s the best buzz ever so what else am I gonna do?!’

‘Been writing and recording in between the gigs so looking forward to getting the new stuff out there sharpish. The new single Canter is one of those songs, upbeat, bit of energy to it and a wee bit of knowledge for the ears of anyone who needs it.’

Gerry Cinnamon’s self-produced, self-released debut album Erratic Cinematic rocketed to the top of the iTunes album charts on release with little more than a social media post; holding off some of the biggest names in music. The album has now sold 85,000 in UK (BPI certified silver) with over 70M streams on Spotify to date. 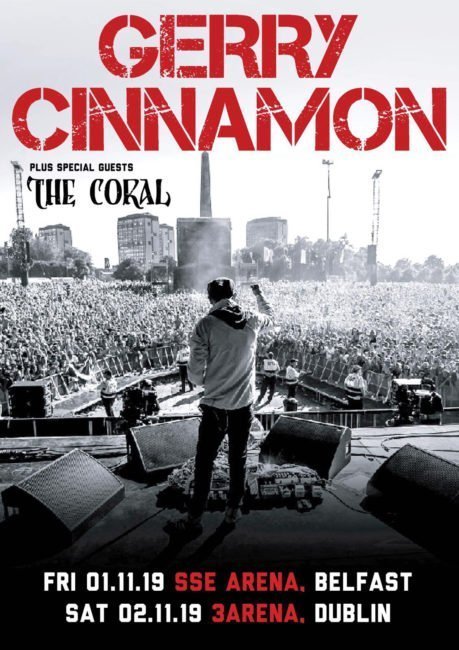 Gerry Cinnamon’s music crosses generations in a way that only a handful of wordsmiths can - relatable, relevant and a true storyteller. Unsigned and unmatched in his ability to operate outside of the mainstream Gerry has become a cult hero and force to be reckoned with.

His anthemic tracks, laced with social commentary have captured the imagination of audiences up and down the country. With every track being different, it keeps the listener on their toes. Using loop pedal harmonies and pounding kick drums, Gerry makes a habit of whipping the audience into a frenzy which sees them leaving on a high and wanting more.

2018 was huge: Selling out every date of his first UK and Ireland tour. 2019 is set to be even bigger. Kicking off with two sold-out Amsterdam shows in the world famous venues: Paradiso and Melkweg, before heading out on his UK and Ireland tour in March 2019, his biggest to date; a number of big festival appearances; new music and much more.

In an age of information overload, it’s clear Gerry Cinnamon cuts through the noise. No longer is the intermediary power with the label or the media. It is between the artist and the people. Gerry is perhaps the UK’s or the World’s best example of that.

He is more than an artist but a phenomenon, paving the way for the next generation of DIY pioneers.

The awards, the sold-out shows and the reaction to his critically acclaimed debut album has not only propelled him to the next level but has affirmed his place as a writer as well as a live act.

And the best part is he’s just getting started.

Few musicians have had a career as artistically diverse and successful as Alice in Chains frontman, William DuVall. From forming legendary Atlanta hardcore band Neon Christ as a teenager in 1983 all the way to...

Four-time Grammy-nominated psychedelic soul band based in Austin, Texas, Black Pumas are pleased to announce a headline Belfast show at Limelight 1 on 3rd November 2021. XS Noize is giving away tickets for the show...