Gary Barlow has today announced a brand new solo tour for summer 2021 - Music Played By Humans - The Tour which includes Irish dates at SSE Arena on 21st June and 3Arena on 22nd June.

Gary will hit the road with a full orchestra, and will bring to life songs from his brand new album, ‘Music Played By Humans’, as well as hits from his incredible, three-decade spanning career. Gary will be joined by special guest, Beverley Knight.

Tickets go on general sale Friday 9th October at 9.30 am

The first single, out now, is the ferociously catchy Latin pop fusion track ‘Elita’, with Michael Bublé and Sebastián Yatra, listen BELOW:

Music Played By Humans - The Tour will take inspiration from the orchestral and big band music which captured Gary’s imagination as a child and eventually led to his new album of original compositions. A true showman at heart, Gary is famed for his engaging and energetic live shows which enthral audiences wherever he goes.

“I love performing,'' said Gary, “I’ve missed it so much. I’m excited to think about how the new songs on the album will sound live and with an audience! I’m just really looking forward to getting out there and seeing everyone again.” 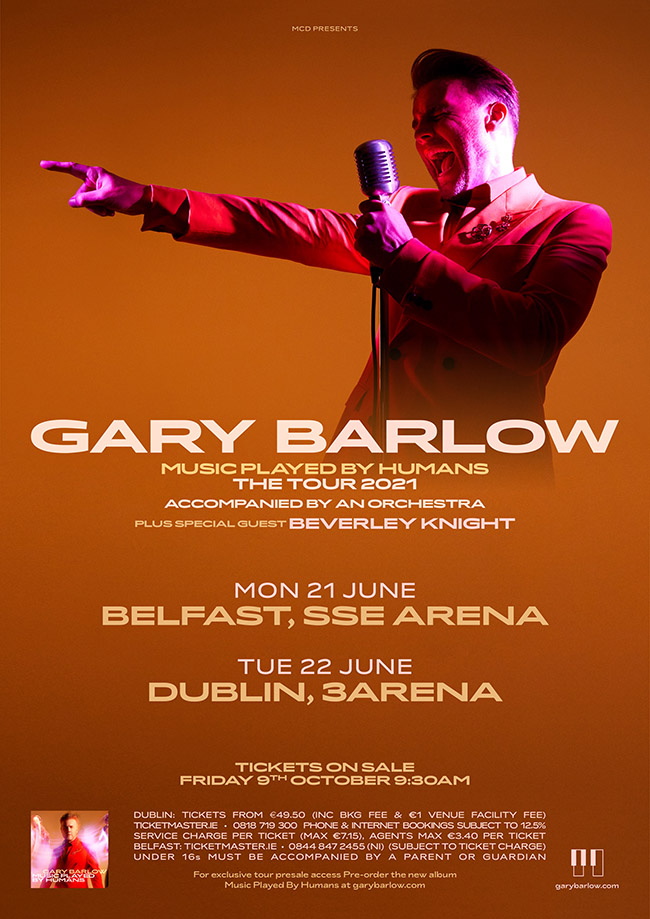 With her powerful vocals and astonishing range, Ariana Grande has emerged as one of the most magnetic and massively successful performers in pop music today. At age 25 she’s delivered three platinum-selling albums and surpassed...

Gary Barlow has admitted Take That finally feel "settled" after some "tricky" lineup changes, and he suggested it might be more difficult for the fans that it is for them. The 'Greatest Day' hitmakers -...

TAKE THAT have called off their upcoming world tour

Take That have called off their upcoming world tour and will only tour in Europe due to an illness in Gary Barlow's family. The group were expected to hit the road in 2019 to celebrate...