XS Noize has shown that there is so much more to music than live music and physical music releases. We have introduced to graphic novels and card games, and now we proudly review our first board game: Music Night. Games like Monopoly and Jenga are undoubtedly classics, but the same thing came to become a bit predictable and monotonous and having played Music Night ourselves; Music Night is anything but boring and predictable.

One of the greatest aspects of this game (as well as being a game about music!) is its ability to be inclusive and allow everyone who wants to, willing and be coerced into joining in. Whilst most games have a 2-4 player cap; Music Night has a 6 teams cap. Provided each team is roughly the same size, everyone can play for the star prize: the Music Night No.1 golden disc winner’s trophy.

Every aspect of music is covered including Old School. Music Night is so old school that this game even includes chalk to write down the scores on the score poster the way the teachers used to write on the blackboard back in the day. Nonetheless, Music Night is also adaptable with today’s world; one can get extra answer sheets and bonus questions (in addition to the six hundred provided!) by visiting the Talking Tables website.

There are six rounds and ten questions for each round beginning with Music Trivia. Is Pop, Metal or Indie your strong suit? This knowledge will undoubtedly be useful, but one will also need to have a collective diverse musical spectrum to be triumphant; for instance, jazz and classical are covered too. Furthermore, the questions go beyond “What was the title of…” or “Which artist sang…”  There are questions about the locations where artists originated, artist’s spouses, the acting careers of artists as well as questions that confirm Music Night is in tune with the Zeitgeist involving the impact of Spotify on music.

The next, second round: Hum that Tune involves using one's larynx and a cardboard guitar prop. Whilst one player of the team plays air guitar and hums a classic tune, the other team member must correctly identify the song title and the artist to score the point. There are no half marks for only correctly stating one part for the question; it’s all or nothing. Laughs, frustration and good times are guaranteed (although Billy Joel might take exception for the type of prop used).

Round three is equally entertaining and at first, appears easier than it actually is. In this Musical Don’t Say it round, one has to describe and item without using forbidden words. Imagine a rock ‘n’ roll take on Pictionary and the Fawlty Towers episode where Basil attempts to not mention “The War” to his German guests. Try not mentioned the “piano” when trying to get your teammate to identify the item “Elton John”. Try not mentioning “Eminem” or “Drake” when the item is “rappers”. Try identifying the “Trombone” when the words “brass”, “trumpet” and “gold” are not permitted. One will find trying to describe “Bono” exceptionally perplexing.  As well as the challenging factor, these questions go beyond the artists and their songs and encompass the instruments that make up the sounds musicians produce. 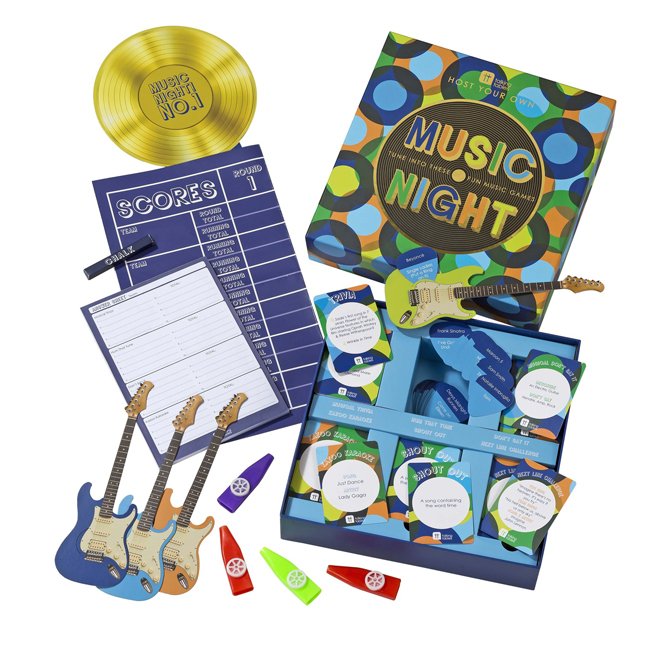 For many round four is a utopic night out, for others, it will feel like being confined to Orwell’s Room 101: Kazoo Karaoke. Like round, two one must name both the correct title and the artist to score, but instead of humming; one uses an impressively neon kazoo. The kazoo player will fatten think they are playing the song in the key of their chosen artist perfectly; on many occasions, the other teammate trying to guess the song will think otherwise. The rest of the team, whilst frustrated about potentially missing out on points; they will be in stitches and the opposing laughing adversaries will be too.

The following Shout Out round is the first round where there is the potential for cheating and conflict. Players are provided with a list of questions, but no approved answers. One will need google as a referee to confirm if someone has shouted out the right answers. In deciding who actually shouted the correct answer first as opposed to who shouted out an answer the loudest; there is no help or guidance for this. Some questions are easy and require mere common sense as opposed to one being a pop encyclopaedia; others will be more challenging such as “The name of a tour”. We all know musicians tour, but what the tours are called can be more challenging to recall quickly.

The final round Next Line Challenge is undoubtedly the make or break round. One team members sing a line of a song and the teammate must correctly sing the next line of that song. Whilst the songs may be well known, the specific lyrics chosen might not be the ones most commonly associated with that song. Answering this part of the question correctly is vital for two points are earned, and only by answering this part of the question does the team have an opportunity to get two more points by correctly naming both the title and the artist of that song. Even when the lyrics to songs such as “Love Train” by The OJ’s appear simple, for everyone knows the next line to “People all over the world (everybody)”? Most would say “Join Hands”. Wrong! The correct answer is “Join Hands (join)”. The round is definitely the tensest and keeps everyone focused as if they were contestants in The Hunger Games especially if the game ends in a tie and requires a Trivia Question to decide the winner.

Music Night is a game all can play regardless of one’s knowledge and even passion for music. In many parts of the game, being musically knowledgeable will provide seldom advantage over your less musically gifted opponents. Teamwork is essential and this game could be an ideal team-building exercise between friends or in the workplace. There is some ambiguity: the rules do not state how many attempts players have in guessing the correct answer and the time limit for answering each question. In conclusion, the gameplay, excitement, bonding, learning and elated frustration make Music Night an ideal game for all regardless of musical ability, perchance for music and board games alike. The memories of bonding, laughing, bickering, humming and playing the kazoo will last a lifetime.

To own your Music Night game and host your own music night please visit https://www.talkingtables.co.uk/products/music-night-in