Just weeks before the release of Doves’ fifth album, The Universal Want, the cherished Manchester-band has shared the album’s closing track, Forest House, but have left it to fans to work out how it sounds – by ‘leaking’ the sheet music and lyrics. For fans to hear it first, they have to play it first.

Chords and lyrics were made available today via the band’s social media channels and website, with Doves calling out to musicians of all capabilities, playing any instrument, to interpret the, as yet, unreleased track. To access the notation visit https://Doves.lnk.to/ForestHouseSheetSo

Giving away no clues, the band – who shattered preconceptions with the release of the complex, sample-based Carousels back in June – authorised the #dovesleak to tempt musicians, whether existing fans or not, to try and get close to what lies in store on the album or create something wildly and brilliantly off-the-mark. Not until the release of The Universal Want on Fri 11 September 2020, will experimenting musicians know how close they got to the ‘real’ Forest House.

Inviting exchanges over social media, anyone can hear new Doves music for the very first time, but only by tackling the track themselves with the band only too keen to hear the results. They have offered to reward the most ear-catching version – whether for its accuracy or innovation – with a signed The Universal Want Box Set AND Jimi Goodwin’s original vocals being added to their recording. 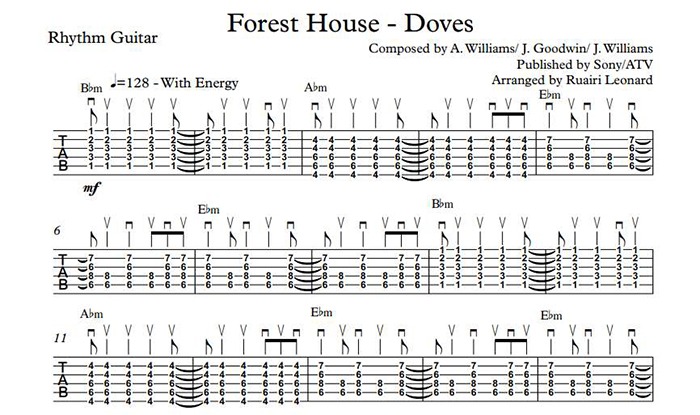 The band says: “It’s been eleven years since our last album, and we all know how hard the last few months have been, so let’s have a little fun where we can. Anyone can have a go, even if all they have is an old, beat-up guitar, so let’s see what people can cook up.”

Musicians can find the notation and words via links on the band’s social media channels at https://twitter.com/dovesmusicblog, https://www.instagram.com/dovesofficial and https://www.facebook.com/Doves with all participants encouraged to tag the band into post sharing their versions, using the #dovesleak tag.

Doves recently announced an extensive tour for next year, where Forest House and previously released tracks from the forthcoming record, both Carousels and Prisoners, will be aired, alongside cherished Doves classics. The full list of dates announced so far for The Universal Want 2021 UK & Ireland Tour are as follows:

High on the emotional responses to their first gigs for a decade, a re-energised Doves follow their live return by announcing numbered limited edition, two-disc, coloured vinyl packages of their first three albums. Released on...

The Live at The Piece Hall series has added a further legendary name to its 2021 line-up, as Manchester alternative rock band Doves has been announced to play a special outdoor performance at the prized...

Doves are going on tour! An emotional homecoming at Manchester’s O2 Apollo, a return to London’s O2 Academy Brixton and a night at Glasgow’s Barrowland Ballroom feature in the 13-date jaunt, with the band hitting...