Producer, composer, and Unloved-founder David Holmes today releases a new single, “Hope Is the Last Thing To Die” featuring up and coming vocalist Raven Violet. With lyrics in both French and English, the track calls out the governments of the world for their corruption and incompetence during the pandemic and their inaction in the face of the climate crisis.

“I never thought I would sing again unless I had something to say and like everyone else the last 18 months have shaken and stirred many emotions,” Holmes says of the track. “'Hope Is The Last Thing To Die' was written from my note books over this period. Scribblings of overheard conversations, interviews and what I was reading. After recording the vox myself I felt these words would be better off sung by someone who could actually sing and would do the song justice. Enter Raven who sang our (Unloved) cover of The Kinks - ‘Strange Effect' which is now gracing the opening titles to the Hulu series '9 Perfect Strangers'. I’ve always loved Raven's voice, so it was a beautiful thing to collaborate with her. She’s now working with me on my next album.”

A dusky slice of atmospheric pop, “Hope Is the Last Thing to Die” is a rallying cry against the elites that have failed us, not just throughout the last eighteen months of the pandemic, but in their continued failure to act on the threat of the climate crisis, a challenge people around the world are rising to with positivity and hope.

Watch the video for “Hope Is the Last Thing to Die” - BELOW:

Holmes is currently in the studio with Unloved, who will return with an album of new material and further collaborations with Raven in 2022. No doubt some of these compositions will make their way into the fourth season of Killing Eve, the Emmy-winning cat & mouse spy series on which Holmes serves as a composer and music supervisor.

Belfast-born Holmes boasts a formidable CV, with five solo albums and twenty-five soundtracks to his name. His screen work ranges from Steven Soderbergh’s classic Ocean’s Eleven trilogy and Steve McQueen’s critically acclaimed Hunger, to stylish TV drams including London Spy and The Fall. Holmes formed Unloved with fellow soundtrack artist Keefus Ciancia (True Detective) and singer Jade Vincent in the mid-2010s. They have released two LPs – 2016’s Guilty Of Love and 2019’s Heartbreak, both of which form the majority of the soundtracks for Killing Eve. 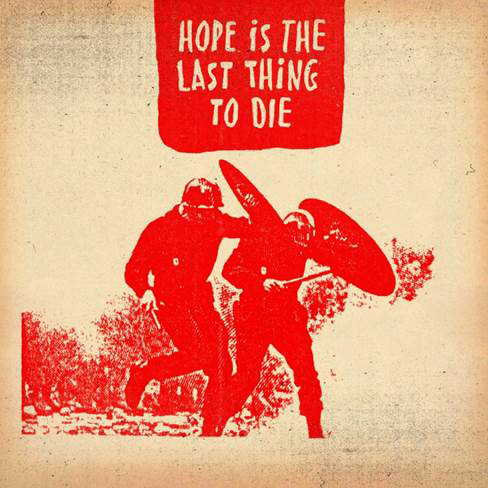 David Holmes’ new single “Hope Is the Last thing To Die” featuring Raven is out today via Heavenly Recordings.

After teasing fragments of songs and art from new album, Who Built The Moon?, Noel Gallagher’s High Flying Birds turn fans’ attention to the release of 'Holy Mountain', the first single to be taken from...

David Holmes spearheads this collective effort to brilliantly capture the essence of the award-winning 'Killing Eve' series in these dual-release soundtracks. The menace and playful brutality of the female lead character is just pouring out...

Heavenly Recordings are thrilled to announce With Animals, the second album by Mark Lanegan & Duke Garwood, released 24th August. The record’s 12 songs are spectral and sinewy, often defined by the spaces in between...