Dappy well known for his time with N-Dubz, released his debut solo album, 'Bad Intentions', in 2012, and since then has put out a number of standalone singles and EPs, as well as guesting on other artists' tracks. 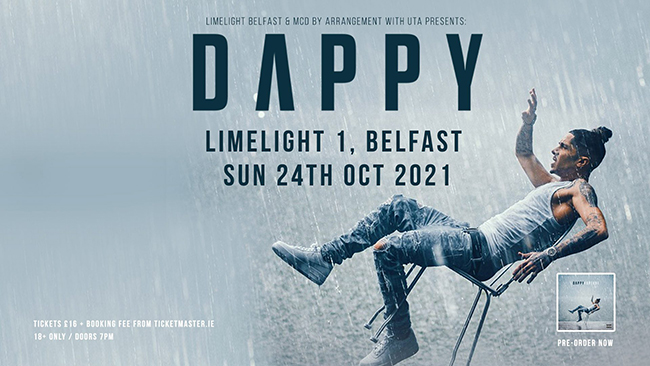 Tickets on sale Friday at 9 am from www.ticketmaster.ie and www.limelightbelfast.com

London based Lazy Day is pleased to announce a headline Belfast show on October 11th 2019 at McHughs Basement. Lazy Day began in 2014 as the solo bedroom project of Tilly Scantlebury. After recording her...

Terri Hooley is a legend among the Belfast music community and beyond. During Northern Ireland’s troubled dark times Terri Hooley’s Good Vibrations record shops and label survived in countless locations around the city, selling and...

US rock duo DEAP VALLY are pleased to announce a headline Belfast show at The Limelight 2 on Thursday, June 28th, 2018. What’s that smell? FUNK, derived from the Latin “fumigare,” meaning, “to smoke.” The...