Coldplay have today confirmed the release of their much-anticipated new album, Music Of The Spheres. The band's ninth LP will hit stores and streaming services on October 15th, 2021.

The band announced the Max Martin-produced album on Instagram via a handwritten note alongside an album trailer BELOW which combines an animated cosmic journey through the album’s planetary artwork with short clips of the album’s twelve tracks.

The band’s note also seemed to hint at further sci-fi themes with the phrase 'Everyone is an alien somewhere'.

In May, the band released Higher Power - the first single from Music Of The Spheres - which has been streamed more than 160 million times. The band’s note also revealed the imminent release of an album track called Coloratura on Friday, to be followed by a new single in September.

The band have also revealed the full album tracklisting - with five of the twelve tracks represented by emojis. 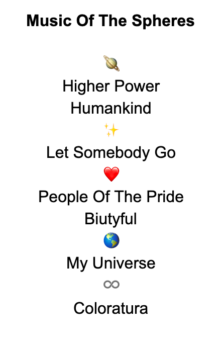 Coldplay has announced that they will play a special, one-off show at London’s Natural History Museum on November 25 to celebrate the release of their new album, Everyday Life (out November 22). All proceeds from the show will...

Clocking in at a shade under 53 minutes, the eighth studio album from Coldplay subverts expectations of typical double album excess and marks a sharp left turn for a band who have again embraced their...

2019 has been an incredible year for music, with releases from legendary artist's including The Who, Northern Ireland's very own Snow Patrol and Liam Gallagher. But it's not all been about the Legends making a...