This is Catfish Coast to Coast: five cities, five photographers, five favorite shots, and five questions documenting each photographer’s impressions of the event. Join us on a journey to Los Angeles, Seattle, Chicago, Boston, and New York City as UK sensation Catfish and the Bottlemen tours America in support of their debut album The Balcony, available on Communion Records.

Seattle boasts a rich musical legacy that began well before the term Grunge was ever used to describe music emerging from the local scene. Ray Charles met up with 14-year old Quincy Jones in Seattle in 1948 and a year later released his first national hit. Jimi Hendrix performed his first gig in the basement of the old Temple de Hirsch site that happens to be just a few blocks down the street from Barboza.

Barboza is an intimate, 200-capacity venue that opened in 2012. It occupies the same building as its larger sister venue, Neumos (formerly Moe’s) that opened in 1994. Neumos was host to the first US tour of Oasis and was considered home base by The Presidents of the United States. Other remarkable acts to grace the building include The Raconteurs, Vampire Weekend, Muse, Fleet Foxes, Adele, The Flaming Lips, and Radiohead, whose free show there on April Fool’s Day in 1995 nearly sparked riots once capacity was reached.

Numerous emerging bands choose Barboza for their Seattle debut. Upcoming shows featuring UK talent include Honeyblood, who has opened for Catfish and the Bottlemen in the UK; and Wolf Alice who, like Catfish, will be showcasing at SXSW this year.

The Catfish and the Bottlemen show sold out almost a month in advance of the Friday, February 13th date. 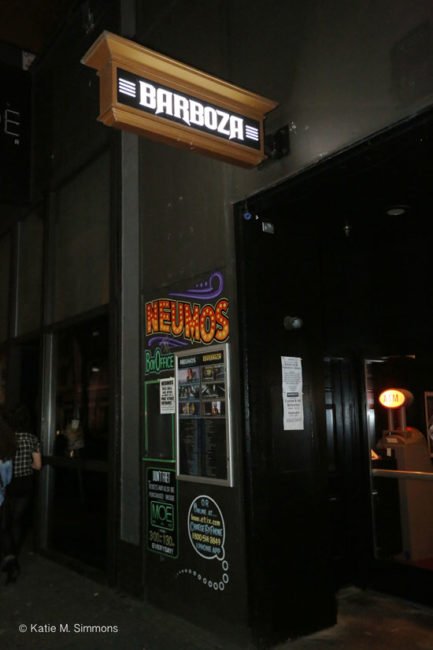 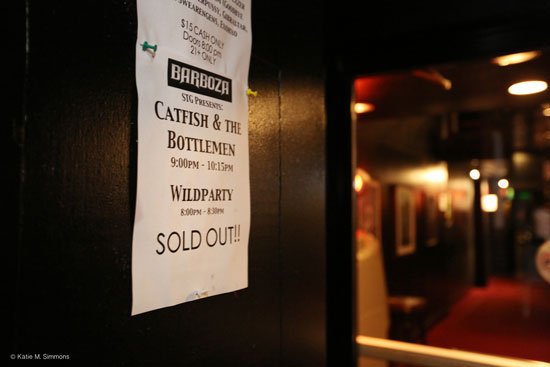 Katie M. Simmons epitomizes the term “people person.” Her affable manner makes her a natural at the portraiture and “day-in-the-life” photography that is her specialty. Her relationship with photography began with a high school job; blossomed through international travel, including a chance meeting with a National Geographic photographer in Antigua, French Antilles; and became her trade via an internship and a scholarship award to further hone her skills. When she is not taking pictures, Katie devotes herself to a number of good causes including youth mentoring and suicide prevention via the organization Forefront.  Her first major assignment was coverage of President Clinton during the tumultuous 1999 WTO Conference in Seattle. Her proudest moment was being selected to photograph His Holiness the Dalai Lama and other dignitaries and celebrities during his 4-day trip to Seattle in 2008.  This is the second time Katie has photographed Catfish and the Bottlemen in Seattle, giving her a perfect attendance record for Bottlemen gigs in that city.

Bottlemen fans know guitar tech Larry Lau and recognize him instantly. At the Seattle show, they even chanted his name! This time, we see him getting by with a little help from his friends Danny (tour manager), and Mike (sound engineer).

Seattle flashback: the photo below is from the first Catfish and the Bottlemen Seattle show on October 19, 2014. It is a shared favorite of Katie’s and mine in that, like Van and Larry, we’ve been close friends since childhood, growing up in a small coastal town in Washington State that is similar in many ways to Llandudno, Wales, the Bottlemen’s home town.

XS – What was your personal show highlight?

Katie: There was a personal moment after Van had exchanged with a fan and he reached out his hand to me to say hello. But also feeling the energy of the fans who had seen him at the last show in Seattle, full of pride and excitement. The room was packed; it had both an intimacy and a power. There was true camaraderie between all of us in front who had seen them before. It was a party atmosphere of celebration of their success: “Did you see them on Letterman?” and that kind of excitement. Everyone just knows they’re going to be big. Friends are teasing me about talking about this so much, but I feel like a proud mom.

You just want them to succeed! I know they will and they are succeeding. They have such talent, but there’s also a kindness and humility about them. I don’t know anyone in that room who wouldn’t talk about them afterwards. After seeing them last time I sent an email to a contact at KEXP saying, “You have to get to know this band!” There’s something delightful about them, and very true. Van’s sweet gratitude, even in the way he says “Seattle!” You can tell they’re still in awe of the love. They really feel the love of the fans from the stage, I think, yet there’s not one ounce of ego. They’re selling out big venues in the UK, rooms of 5,000, and here they are in Barboza, a small club in Seattle, and they absolutely pour their hearts into the show.

Katie: The lighting was challenging and I had two cameras, one of which stopped working in the middle of the show. My favorite thing though was that it was such an intimate venue and being up close and watching their expressions. I would love to create a montage of all of Van’s expressions, from the quiet acoustic piece to moments where he’s absolutely dripping with sweat, rocking out all over the stage, and connecting with the band members in this pure, raw, musical way. I appreciated the variety of emotions. They all have an endearing quality.

This is the second time I’ve photographed them so I knew about them and knew their songs. I was singing along while photographing, and for many of the songs, everyone was singing with them. It had a very close feeling. That’s an important piece of it, isn’t it, the smaller venue? They played on Letterman! They’re now known throughout the US and the world. They could have a real ego and act like “We’re too good for this,” but they’re totally into it wherever they are.

Katie: There’s a shot of Van laughing with a fan that shows how genuine and approachable they are. It shows how engaged the band is with the audience. There is charm and joy and absolute conviction that they are in the right place at the right time. That’s their power and maybe that’s part of their charm. They are exactly where they want to be. Van has a twinkle in his eye, and they all have charisma and it’s palpable. You can feel their connections with each other and with the room. They are genuine and give you a reason to care about them. There’s also a fun little detail in this shot. The background lights make a little heart shape. Can you see it?

Katie: I was nervous about being interviewed and here I’ve been talking about them for an hour! I’ve oriented my photography in general toward capturing people and families in day-in-the-life type situations. I’m doing this for the fun. I have only photographed a few bands—Dave Matthews, Death Cab for Cutie—previous to our projects. Then I shot Catfish and the Bottlemen, Bear’s Den, and Dan Mangan + Blacksmith for you.

I want you to share that photo of you in your punk rock outfit in high school back in Port Angeles, Washington. Having known you since fourth grade, I know your love of music goes way back and it’s been fun to share your passion and be with you on this path that you are on. I can’t wait to see where it goes. And what about Brian Phillips, our DJ friend from Port Angeles who will be hosting the band in Ohio [for The Big Room on CD102.5 in Columbus, Ohio]! It’s incredible that three people from our little home town are covering this band in three different US cities! What’s happening here?

A big part of this is also the camaraderie of fans from the shows. A group of us are now going to see Wolf Alice in March at Barboza. When tickets went on sale for Catfish this time, I bought eight so I could take my friends and let everyone know about this band. They make people want to care about them. They’re genuine and they’re on their way to getting that helicopter Van told you about the last time!

It may seem glamorous, but the life of an emerging band can be anything but. Bands form, gig, struggle…and sometimes come undone. It’s a game of survival of the fittest, in which the most hard-working, […]

Catfish and The Bottlemen’s young and growing fan base finally get their hit of new music as the band releases new single, Longshot, OUT NOW on Island Records and accompanying video. Revealed exclusively on BBC […]