The legacy of David Bowie’s death has been honoured with countless books, being chosen as the first solo artist to feature on an entire Royal Mail stamp set, having his own Trump card game and now, the latest graphic novel about him – BOWIE: STARDUST, RAGUNS & MOONAGE DAYDREAMS is being released in time for what would have been his seventy-third birthday.

Beginning with a foreword by Neil Gaiman, we learn just how iconic David Bowie made himself during his lifetime. Gaiman recalls reading about Bowie before he had heard his music. Through Bowie, new words including “bisexual” were introduced to Neil.

BOWIE: STARDUST, RAGUNS & MOONAGE DAYDREAMS begins with Bowie playing at the Hammersmith Odeon on 3rd July 1973, the last leg of the Ziggy Stardust tour, saying, this tour is the greatest ever, “because…”. Before anything else is uttered, the reader is transported back eleven years earlier to 1962, when David has just been left with a permanently dilated pupil following a fight over a girl with his lifelong friend George Underwood. The authors take us through Bowie’s life in the 1960s: the bands he joined; learning to mime and the point David stopped being David Jones and became known as David Bowie.

This graphic novel penetrates deep into the early private life of David Bowie, including how mental illness was prevalent in his family which affected Bowie’s half-brother Terry Burns and two of his aunts including Nora who was lobotomised. Whilst David’s first solo record would be released in 1967 at just twenty years old; it was a flop. We learn how Bowie slowly took steps to reinvent himself, including taking tips from a fashion stall in Kensington market worked on by Farrokh Bulsara (Freddie Mercury). Bowie would face many setbacks including his first promo film of “A Space Oddity” flopping and being dumped by his then-girlfriend Hermione Farthingale. Even when things were improving (David meeting his future wife Angie Barnett, moving into his creative headquarters in Haddon Hall with her and “A Space Oddity” being re-recorded and receiving much airplay); David’s dad would die from pneumonia when David was just twenty-two years old.

David’s relationship with musician and producer Tony Visconti, who Bowie would collaborate with throughout his career is captivating and discussed in meticulous detail. Visconti not only performed with Bowie on a John Peel radio show in 1970; he and the rest of Bowie’s band at the time moved into Haddon Hall with David and Angie. David’s friendship with Marc Boland (T-Rex), the tension created between Marc and Bowie by Boland’s wife June and the media sketched rivalry between the two musicians is adroitly captured.

There are many fascinating facts, including how The Man Who Sold the World LP was originally called “Metrobolist”; being photographed with Elvis at an awards show; these two men sharing the same birthday (8th January); how the sound of a telephone ringing made the cut of a “Life on Mars Recording” featuring Rick Wakeman on piano; performing at The Gaumont State, Kilburn High Road, London where Buddy Holly had performed, and how, despite an absent-minded audience; Bowie’s Camden Roundhouse performance on 22nd February 1970 was seen by many commentators as the first-ever live glam rock performance.

The bulwark of BOWIE: STARDUST, RAGUNS & MOONAGE DAYDREAMS focuses on the period towards the end of 1971 after Hunky Dory when Bowie announces to his bandmates that there will be a new frontman leading his band called Ziggy Stardust. The story behind the Ziggy image is detailed and is based on a fashion mage by Japanese designer Kasnai Yamamoto who would produce many “far-out” costumes for Bowie.  Bowie’s entire band is provided with a new wardrobe of outfits. In 1972, Bowie’s acclaim would continue to grow as Barbara Streisand recorded her own version of “Life on Mars”, David would star in the film “Son of Dracula” with Ringo Starr and Harry Nilsson and on 17th June 1972, when performing the “Suffragette City” finale at Oxford, photographer Mick Rock would capture “one of the most iconic images in the history of rock and roll” when Bowie played his guitarists’, Mick Ronson’s guitar with his teeth. 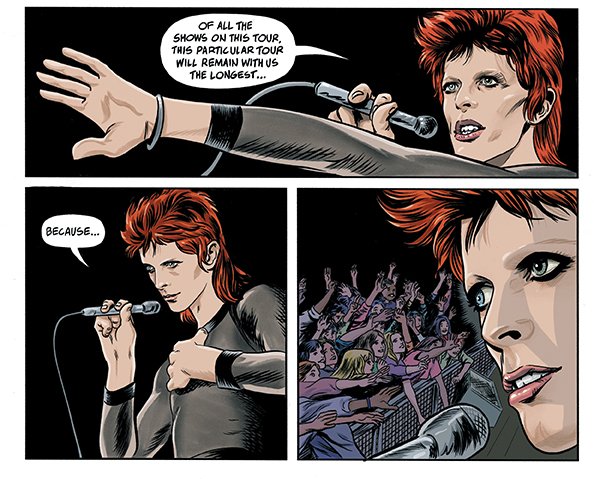 The Toby Jug pub gig in Tolworth, London received less acclaim when Bowie unsuccessfully attempted “the Iggy Pop Crowd Crawl” and was dropped by the crowd. However, this faux pas was insignificant to being involved in a car crash and surviving heavy storms in a flight (which would cement a lasting fear of flying for David who would not fly again).

BOWIE: STARDUST, RAGUNS & MOONAGE DAYDREAMS takes the reader through the evolution of Bowie’s image as he shaves off his eyebrows which would form part of his Aladdin Sane identity.  Aladdin Sane went gold upon release making it the “biggest release for an album since The Beatles”. The rise of “Ziggymania” is examined which saw David being frequently mobbed and his private life interfered with and fans sabotaging venues including The Green’s Playhouse in Glasgow. This graphic novel ends full circle with Bowie playing at the Hammersmith Odeon on 3rd July 1973, the last leg of his Ziggy Stardust tour that was documented by D.A. Pennebaker – known for his documentaries on Bob Dylan and the Monterey Pop Festival.

BOWIE: STARDUST, RAGUNS & MOONAGE DAYDREAMS lives up to the hype because this graphic novel goes beyond the enchantment behind the ever-changing and evolving iconic legend of David Bowie, allowing not just a glimpse, but a full-blown walk through the private life of the young, vulnerable and non-alien, but all-human David Bowie. One sees David’s suffering, his setbacks and the ongoing toil he endured to evolve into becoming Ziggy Stardust. Most importantly, we see the links between comics, graphic novels and music. For example, this novel pays deft attention to the comic strip featured on a 1973 double album featuring David’s pre-“Space Oddity” material. BOWIE: STARDUST, RAGUNS & MOONAGE DAYDREAMS will bring together Bowie fans, lovers of comics and graphic novels across the generations for many years to come.

“Rebel Rebel” The David Bowie experience are pleased to announce a Belfast show at The Limelight 2 on Friday 21st June 2019. “Rebel Rebel” are a 6 piece (nine piece for larger gigs) David Bowie […]

“Lazarus” is the second single from Bowie’s 28th album ★ out January 8 on ISO/Columbia Records. Director Johan Renck, who also directed the 10-minute short film for the album’s title track, commented on the experience […]

Daphne Guinness has today released the new video for ‘No No No’, the latest single to be lifted from her new album ‘Daphne & The Golden Chord’, produced by Tony Visconti and available now across […]